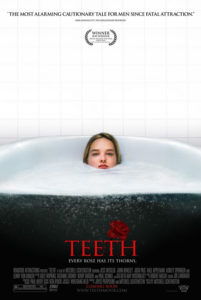 There’s an anti-rape condom for women called “The Rapex” that when placed into the vaginal canal acts like a cheese grater on invading men. If an unwanted penis, or anything else for that matter, is inserted, tiny barbs attach and proceed to tear the uninvited object into shreds. Grim but effective, I suppose, though one wonders whatever happened to mace and Tasers?

Teeth is about a girl with a similar defense mechanism embedded into her genetic makeup. Looming over her sleepy suburban home, two massive nuclear power plant cooling towers suggest the cause of her mutation. But don’t be thrown by the word “mutation”— Dawn (played by newcomer Jess Weixler, who won a Special Jury Prize at Sundance for her performance) looks like everyone else, inside and out, save for the sharklike chompers inside her. Otherwise, she’s just a regular high schooler, with a penchant for abstinence fed by the cultish religious group guarding her morals. Her dedication to “purity” has conveniently kept the boys away, not to mention her own hands, leaving her naïve to the whole sex thing.

Dawn refuses advances from her schoolmates. Much to the chagrin of her male peers, she’s taken a vow to avoid all activities resembling sex. She even steers clear of PG-13 movies, because, certainly, they depict making out. Luckily there’s the dreamy-eyed Tobey (Hale Appleman), who’s in the same chastity cult as she. Doing everything two teenagers can do to avoid temptation, eventually, they decide to give in. But when Dawn has second thoughts and Tobey forces himself along anyway… chomp.

Curious that the unexpected result shocks Dawn just as much as her would-be date rapist. It’s hard to imagine how she could remain so oblivious to what’s inside her. Then again, her school’s health class curriculum studies the human penis, but obscures pictures of the vagina with a big golden sticker that might as well say “Censored!” Indeed, first-time feature writer-director Mitchell Lichtenstein’s film is a satire, intended as a gristly after-school special, a cautionary tale, and an indictment against archaic fears of female sexuality. Soon enough Lichtenstein’s allegory allows Dawn to control her sexuality, her gift, so that by the conclusion she’s a Venus flytrap clamping down with full-fledged predatory instinct, using her femininity as a deadly weapon.

Lichtenstein’s concept derives from ancient Vagina Dentata (Latin for “toothed vagina”) myths involving man’s inherent fears toward intercourse and women. The film references one piece of lore that claims vaginal teeth represent the animal nature of womanhood, something to be tamed by a man brave enough to “conquer” both the woman and his own fears. It boils down to the enduring conflict of Christian shame versus natural physical longing; when those two opposing ideals clash, all hell breaks loose in confused sexual frustration. Artistically or narratively, cultures the world over have frequently represented those frustrations through stories of Vagina Dentata.

Lichtenstein seems to care deeply about feminist ideals as equally as he seems fascinated with the cultural tendency to damn women for forthright sexuality. Therefore, he cleverly addresses society’s fear and mistreatment of women, suggesting a fantastical metaphoric alternative with Dawn’s adaptation. He’s directly Freudian about his discussion, centering most of the gore (yes, this is a particularly nasty film) on realizing in bloody detail the male’s innate fear of castration.

Teeth doesn’t suggest that women should protect themselves with alarmingly Medieval devices like Rapex; it doesn’t offer any realistic alternative either. Instead, the film provides a harsh parable, perhaps even a message to slimy men who will do anything to scheme or force their way into a girl’s pants. The product is a hearty piece of filmmaking by a rare male feminist director. Lichtenstein’s intentional campy laughs and shocks rely on none-too-subtle symbolism, drawing on an intelligence and sense of mythos that entertains as much as it makes us squirm. With any luck, Lichtenstein will have scores of men asking themselves What if? the next time they’re in bed.