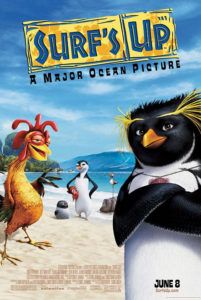 I’m not sure how to explain the recent penguin obsession enjoyed by Americans. It started with March of the Penguins, 2005’s pleasant little documentary about the journey of Emperor penguins to their breeding ground. Last year’s Happy Feet told another kind of story, an animated musical about a tap-dancing Emperor penguin. Oh, and let’s not forget Farce of the Penguins, Bob Sagat’s mockumentary—a five-minute dirty-as-hell skit idea drawn out over 99 minutes. A few months ago, you may have wondered what the next penguin movie would be. Ninja Penguins? Escape from Penguin Island? Attack of the 50 Foot Penguin? Ponder no longer. As much as I would have liked to have seen Chilly Willy: The Movie, here we are with Surf’s Up, a combination of existing penguin films presented in documentary-style computer animation, about penguins who… ahem… surf.

Penguins aren’t an animal normally associated with surfing to my knowledge—mostly they’re just known for being flightless birds or occasionally seal chow. Whole selections of the animal kingdom have been caught surfing on film. Disney’s Lilo & Stitch sported a surfing blue alien (which was über-cute, by the way). Tom from Tom & Jerry went surfing once in the 1960’s. And I’m sure we’ve all seen that surfing dog or squirrel show up on the local news. Though Hollywood has a long history of surfing animals, none, until now, have been penguins. You may be overkilled on penguin stories, but don’t dismiss Surf’s Up just because Sony Pictures Animation refused to try something new and make a movie about surfing gerbils. You’ll be surprised just how funny, sweet, and beautifully animated this film is. Besides, they’re Rockhopper penguins, not Emperor penguins. That’s like totally different…

The documentary-style storyline contains interviews surrounding a young penguin named Cody Maverick, voiced by star of this year’s Disturbia and Transformers, Shia LaBeouf (an excellent talent I look forward to seeing more of). Following a dream instilled in him at youth by surfing legend Big Z, the young Cody strives to get away from his hometown of Shiverpool, Antarctica to Pen Gu Island, a tropical paradise where penguins surf in an organized competition. Along the way, Cody meets fellow surfer Chicken Joe (voiced by Jon Heder), a ruthless promoter Reggie (James Woods), and Reggie’s assistant Mikey (Mario Cantone). Of course, there’s a penguin love interest, voiced by the ever-cute Zooey Deschanel. And Jeff Bridges shines in the non-White-Russian-drinking, sans pot smoking, clean-mouthed penguin version of Jeff Lebowski, named Geek. Granted, you won’t find Geek at the bowling alley or at In-N-Out Burger with Donny-Who-Loved-Bowling and Vietnam vet Walter Sobchak, but he teaches the same timeless lesson as The Dude—that winning isn’t everything, man.

I was notably taken by the animation in Surf’s Up. As stated, the film is shot in a documentary style, sometimes incorporating “vintage” footage designed to perfection to look as though it was filmed in the 1930s or 1970s (see picture right). Scenes where penguins glide through a wave’s tunnel sparkle with blues and greens, while the background, often a sunset, contrasts with bright oranges and reds. Such moments were breathtaking animation, some of the best I’ve seen from one of Pixar’s rival animation studios. Directed by Ash Brannon (co-director of Toy Story 2) and Chris Buck (director of Disney’s Tarzan), both have experience with cartoon humor and beauty. Their talent is combined to make a lively CGI picture, the first from a studio other than Pixar or Disney where the animation impressed me more than the story. Films like Flushed Away or Over the Hedge offer comical stories, but their animation rarely achieves the splendor of something like Finding Nemo or The Incredibles, visually speaking. Surf’s Up had me with visuals alone.

Nevertheless, mostly due to the fluid voicework, I was engaged in the story, however formulaic it may be. LaBeouf’s natural lightheartedness and casual delivery makes his performance the most non-traditional of its type. Cody, the likable hero, could have easily been donned with a Sean Penn ala Fast Times at Ridgemont High surfer guy voice, but instead, he’s given a modest humanity by LaBeouf. The mockumentary style, something normally reserved for grown-up fans of Christopher Guest, plays out wonderfully for both children and adults, delivering something wholly welcome to your average summer children’s movie. So, in the end, during future discussions about which of the hundreds of penguin movies out there (and yet to come) is my favorite, I can easily say Surf’s Up.