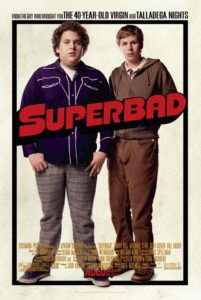 Superbad comes from writers Seth Rogen and Evan Goldberg, who wrote from their own high school experiences with virginal angst. With three weeks of school left before summer and eventually the beginning of college, the characters, named Seth and Evan like the film’s writers, plot American Pie-style to loose their virginity. They’re social rejects who spend their nights drinking until sick, trying to get into strip bars, and watching internet porn to their heart’s delight. Chubby and penis-obsessed, Seth (Jonah Hill) has so little respect for himself that he assumes the only way to have sex is to be a drunk girl’s mistake. Evan respects women, so much so that he’s afraid to make a move.

Seth and Evan hang out with Fogell (Christopher Mintz-Plasse), a lanky ultra-nerd who’s not so concerned with having sex as he is excited about getting a new fake I.D. It reads that Fogell is twenty-five, from Hawaii, and named “McLovin.” No first name. Just “McLovin.” Who cares if Fogell looks like he’s twelve? With Fogell’s fake I.D. at Seth’s disposal, cool-girl Jules (Emma Stone) asks him to pick up alcohol for her party that weekend. Seth agrees, euphoric from the attention of such a high-class girl, taking it as a sign that after getting Jules drunk, he’ll at least get to second or third base, and round home sometime mid-summer. Evan is not so excited about the whole get-drunk-then-get-laid scheme, revering his crush Becca (Martha MacIssac) too much to insult her with such advances. Despite the immorality, not to mention legal consequence of preying on Jules in the manner suggested by Seth, it could be worse: Seth and Evan could be wearing bras on their heads, trying to make the perfect girl with a Barbie doll and magazine photos of Kelly LeBrock à la Weird Science.

Fogell’s attempt to buy alcohol is successful until the liquor store is robbed with him in it, and all hopes of getting to Jules’ party, thus getting laid, are ruined. Two cops (Seth Rogen and Bill Hader) show up to file the report. Awed at “McLovin” and his hipster name, they take him on a ride-along. Fogell spends the bulk of his night cruising the streets with two hooligan cops, discharging rounds at stop signs, talking Star Wars, and drinking beer on duty. But what of Seth and Evan’s hopes of losing their virginity? Stakes are high, as losing your virginity in high school has been a priority for the last few decades, ever since high school sex comedies became popular. People now scoff at an 18-year-old virgin, figuring that such a person will eventually become Steve Carell’s character from The 40-Year Old Virgin. I remember being worried that I’d never loose my virginity, but at the same time not wanting to be the high school’s manslut. Having a respect for women, I suppose I was more like Evan. Here, there’s even a familiar scene where Evan shoots down the very drunk Becca, hoping to avoid rushing into things. Now I realize how transitory it all is, which is the lesson taught by Superbad.

Teen sex romp flicks have blossomed from the pure testosterone-based trash of Porky’s, to Judd Apatow’s ongoing crop of morally respectable material. Seth Rogen combines his standard affinity for the raunchiest of sexually explicit dialogue with an eventual respect for women. His appearance in movies like Knocked Up and the aforementioned The 40-Year Old Virgin do everything to show viewers the power of respecting sexuality through characters who clearly do not… until the movie ends. Superbad waits until the end (the very, very end) before Seth and Evan learn their lessons. Until that point, we’re given some of the dirtiest dialogue and most manifold series of penis drawings I’ve ever seen in a movie like this. The change was a little hard for me to believe—after 110 minutes of gross-out humor and discussions about “fucking”—that Seth’s character and attitude toward women would make a complete turnaround in the last few frames. However fast the change occurs, it’s a well-meaning message tacked on to an unendingly funny movie.