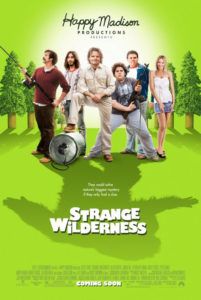 I would love to read the script for Strange Wilderness, if only to find out if writers Peter Gaulke and Fred Wolf actually put all of those “dudes” onto paper. If so, they reached some sort of “dude” capper, not met since the original animated series of Teenage Mutant Ninja Turtles. Directed by co-writer Wolf, who also scribed Joe Dirt and the Norm MacDonald vehicle Dirty Work, this movie makes it no secret that he enjoys his dirty humor.

The setup is that wildlife television show “Strange Wilderness” is going off the air. Peter Gaulke (Steve Zahn, named after writer #1) follows in his father’s footsteps as the show’s host. Unfortunately, Peter’s friends, such as Fred Wolf (Allen Covert, named after writer #2), are incapable idiots unwilling to put down the bong and concentrate on improving their failing series. Network bigwig (Curb You Enthusiasm’s Jeff Garlin) takes their show off the air due to poor production value and dirty commentary on animal coitus. Their voiceovers consist of cheering while animals have intercourse, hissing “I’d like to break me off a piece of that” to lion sex.

Desperate to keep their show running, Peter enlists his friends to find Bigfoot somewhere in Ecuador. Joining him is a slew of familiar faces, including Jonah Hill (Superbad), Justin Long (Live Free or Die Hard), Kevin Heffernan (“Broken Lizard” writer), and Ashlee Scott (token “hottie”). They set out against the Network’s hotshot wilderness guru Sky Pierson (Harry Hamlin), who has a three-day head start. Their guide named Dick (Blake Clark) takes them into the thick bush of South America’s vast jungles. (And I assure you, Peter’s crew found more humor from the words “Dick” and “bush” than a junior high boy’s locker room would.)

Indeed, director Fred Wolf’s movie is childish and garish, filling its lengthy 87-minutes with a disturbing amount of deformed penis jokes. At one point, and I won’t bother explaining how, a turkey attaches its mouth irremovably to Peter’s penis; doctors attempt to dislodge the bird by pulling it across the room, stretching Peter several feet in the process. Another penis instance occurs in the jungle, where the crew’s second guide (played by Robert Patrick) pointlessly unveils his Frankenstein-esque malformed member. Surely the point is shock value, but one wonders why the filmmakers are so preoccupied with revealing quick glimpses of warped man-parts. Perhaps this is the next extension of the traditional slapstick kick-in-the-groin?

Baffling more than the frequency of penis jokes, classic actor Ernest Borgnine appears, sharing scenes with Steve Zahn and the other dudes. Winning an Oscar for Marty in 1956, he is one of yesteryear’s few remaining actors to continue a steady stream of output. Looking at his page on imdb.com, I’m surprised to find he keeps up several projects every year. Once an actor of incredible prestige, it’s regrettable that Borgnine has reduced himself to this garbage over his benchmark-type roles (see From Here to Eternity, The Dirty Dozen, The Wild Bunch, and Escape from New York)—that I would even mention such great films when discussing Fred Wolf’s ode to stupidity feels wrong.

Strange Wilderness makes Kung Pow: Enter the Fist look like art. Both rely on what looks like improvised humor worked from poking fun at vintage video. The movie plays like the hellspawn of Bob Sagat’s rift Farce of the Penguins, or Jackass, only with real actors pretending there’s a plot in between stupid stunts and smutty dialogue. The occasional filthy commentary to age-old wild kingdom footage dredged up a rare chuckle, but this Happy Madison production (Adam Sandler’s company) feels too much like a bunch of idiots trying to entertain themselves.