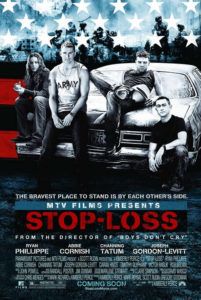 The American military’s “stop-loss” policy involuntarily lengthens a soldier’s contract, committing selected troops to another tour or more, thus breaching a legal contract. With no draft and anti-war sentiments at an all-time high, the military chose to pull a fast one on volunteer soldiers, initiating what’s been called a “backdoor draft.” The hypocrisy remains that the policy can only be activated during times of war, though technically, Congress has not officially declared war. But nevermind the government’s illegal misuse of the practice, since most judges resolve to dismiss cases brought to court before they ever begin.

Stop-Loss was directed by Kimberly Peirce, the filmmaker behind Boys Don’t Cry, and co-written by Peirce and Mark Richard. Working through reportedly numerous screenplay drafts, their story addresses the injustice of America’s stop-loss policy, yet refuses to fight against it. The result comes off as (to paraphrase the saying) a film whose hummingbird body can’t keep up with its alligator mouth. Every necessary criticism is made for an ample denunciation of stop-loss procedures; except, any guts this film might have had were spilled out all over the floor thanks to the film’s lackluster ending.

Revolving around a troupe of southern-fried soldiers returning home to Texas from Iraq, we watch them fall apart by drinkin’ and fightin’ away their frustrations, be it from post-traumatic stress or their desperation to stay home. Actor Ryan Phillippe, who always manages to surprise me, does the same here as Brandon, a squad leader who in the first scenes in Iraq makes the mistake of leading his men into an ambush. Several soldiers die under his command; later, forgiving himself doesn’t come easy. Upon returning home, Brandon ruminates over his guilt, and then altogether snaps when he’s stop-lossed. He goes AWOL only to find no one, not even his bigshot senator friend, will defend his situation, despite his legal justification. His only option becomes Canada or Mexico or back to Iraq.

His fellow squad members are afflicted by equal psychological throes; none can reacclimatize themselves to civilian life, unable to let go of the horrors they’ve seen or participated in. Perhaps because we’re only seeing their post-trauma shells, there’s a certain detachment from these characters. Supersoldier Steve (Channing Tatum) finds that Iraq feels more like being home than in the arms of his sweetheart Michelle (Abbie Cornish). Tommy (the excellent Joseph Gordon-Levitt from The Lookout) finds solace in a bottle after his wife kicks him out, claiming he’s changed. Peirce offers up their maladies as tragic, but ultimately resolves such symptoms are untreatable, as the battle must go on…

For a better film on this subject, seek out last year’s Redacted, a little-seen film by writer-director Brian De Palma (The Untouchables, Mission: Impossible) that challenged both the media’s representation of war, and the traumatic effects war has on individuals. Or check out the more dramatized anti-war statement In the Valley of Elah (by Paul Haggis, director of 2005’s Best Picture Oscar-winner Crash), which disguises itself as a mystery, but then subtly lambastes our current conflict by addressing issues of post-traumatic stress disorder. Both films suggest that because of such debilitating aftereffects, if our men stay over their long enough, we’ll never recover them. Essentially, we’re saying goodbye forever as soon as they leave.

Claiming anti-war film airs, Stop-Loss resolves that despite the injustice of this procedure, soldiers must concede to The System and return to war, pulling its most important punch. Peirce suggests the alternative remains worse than fighting in a war these soldiers don’t believe in. I ask you, is living in Canada such intolerable cruelty that exposing yourself to probable death and trauma-inducing battle-horror looks better in comparison? This is not an anti-war film, but rather a testament to the hopelessness of challenging the government—almost to defeatist, propagandistic extremes. Instead of defending your beliefs by heading underground, the film recommends silently following the rules.

With its message muddled and the last minutes confused, Peirce’s film lacks the salient message better films like Redacted and In the Valley of Elah convey with more class and artistry. We have no question as to how these other Iraqi conflict films challenge us with their statements. When so many films today are making bold statements on the Iraqi conflict, Stop-Lossremains just a chit-chat on the subject—nothing we can’t find on talk radio. Merely an ambiguous discussion, the film at least maintains an agreeable sympathy toward American soldiers, even when sending them back to the wolves.