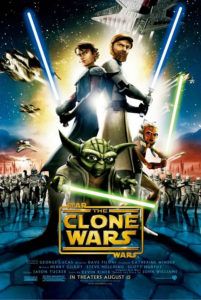 Even before the first scenes, when the Lucasfilm Ltd. logo appears sparkling in emerald green, there’s evidence Star Wars: The Clone Wars will not feel like the other entries in George Lucas’ enduring space Western. Usually, there’s silence behind the glimmering emblem; here audible fighter pilot radio banter goes back and forth. And then those famous words: “A long time ago in a galaxy far, far away…” Normally that would cue John Williams’ iconic score to blast as the prologue titles recede into the distance, but no. Instead, a voice recalling a 1950s radio announcer relates the foreword. The film was produced by Lucasfilm Animation and distributed by Warner Bros. in preparation for the upcoming television series on Warner’s Cartoon Network. As production went underway on the series, studio heads saw an opportunity for a full-length picture; Lucas himself describes the feature as an “afterthought,” though I’d lend the tag of 90-minute trailer for the TV show.

The animation is shoddy and unnatural, as if statues had come to life but were still somewhat restricted by their previous form. Characters move like they’re drying in concrete. Humans and aliens are seemingly cut out of clay, while the robots, well, they were animated by computers in the latest three movies anyway, so they look normal. Every jaw line has points, every nose an edge, and eyes are as big as apples. Facial expressions range from blank-faced to stoic. It would be complimentary to declare the animation sub-par, especially when every other major animation studio these days is making vast leaps toward realism and creative stylization—meanwhile, this film has none.

The funny thing is, despite the animated humanoids, the rest of the film appears identical to Lucas’ “Prequel” Trilogy. But don’t misunderstand me. This is no testament to the animation, rather a censure of where the franchise has gone since Lucas began tampering with the Original Trilogy back in the mid-1990s. Remember the deleted scenes Lucas added back into Star Wars: A New Hope, including one with a computer-generated Jabba the Hutt? Well, Jabba looks just about the same here as he did in the supposed “Special” Edition of the original film.

The story takes place sometime between Attack of the Clones and Revenge of the Sith, when the impetuous Anakin Skywalker (voice of Matt Lanter) has learned all he can from Obi-Wan Kenobi (voice of James Arnold Taylor). He’s entrusted with his own Padawan Learner (in other words: Jedi apprentice), a girly pre-teen alien of some kind named Ahsoka (Ashley Eckstein). She’s playful, which means irritating, and develops a partnership with her mentor close enough to require nicknames like “Skyguy” and “Snips”. She also refers to R2-D2 as “Artooey” and extends cutesy monikers beyond their limit.

Anyway, while Obi-Wan fights evil separatists in uneventful battles filled with laser blasts and explosions, Skywalker and Ahsoka are sent to recover Jabba the Hutt’s son who was kidnapped in a plot to turn the powerful Hutt clan against the Alliance. You probably stopped there and wondered What? upon reading “Jabba the Hutt’s son”, thinking Who the hell procreated with Jabba? These questions are best left unanswered. Suffice it to say the little creature is a cross between a tadpole and a turd; Ahsoka calls it “Stinky”, and it feels more contrived even than Jar-Jar Binks (yes, that bad). The events surrounding Anakin and Ahsoka’s rescue of “Stinky” are wholly worthless, since come Return of the Jedi Jabba and his followers are blown to smithereens by Luke, Leia, and Han Solo. That means “Stinky” is dead too, thankfully. Realizing this was perhaps the most enjoyable experience the movie offered.

Not that I want to be reminded of the Star Wars prequels, but the voicework for familiar characters doesn’t match-up. For whatever reason (probably because they read the script) Ewan “Obi Wan” McGregor and Hayden “Anakin Skywalker” Christiansen didn’t reprise their roles in voice form. Even Yoda, typically voiced by Muppeteer Frank Oz, is substituted by Tom Kane. And John Williams’ music is altogether replaced by booming electric guitars and Middle-Eastern percussion. Seeing this contrived piece of inferior computer animation, we realize the lows George Lucas is willing to go for a buck. We should have seen it back in 1978 when Lucas signed-off on The Star Wars Holiday Special, a made-for-TV spinoff that used the entire cast of the original film to sell toys. Perhaps, like that embarrassment, Lucas will realize his folly with Star Wars: The Clone Wars, refuse to release the end product on home video, and pretend it never happened.