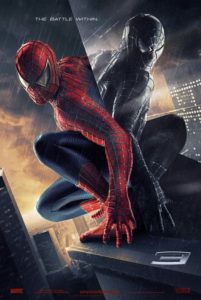 Although conflicted on how to review this film, either as a comic fan or movie critic, I must submit to the latter. I will make some comments later on that represent my fandom of the Marvel Comics universe in relation to comic-to-film adaptations. I will argue that keeping in touch with source material betters film productions, a film’s reception, and the franchise as whole—but for now, on with Spider-Man 3 from the moviegoer’s perspective… Anyone that has read my reviews for Spider-Man and Spider-Man 2 knows my great affection for the first two films. Sam Raimi keeps his stories concentrated on the nerdy Peter Parker, then on Parker’s first and only love Mary Jane, and finally on the Spider-Man vs. Villain conflict—all storylines work together, creating a new, cinematic mythology for the character. Spider-Man never takes precedence over the alter-ego, and Raimi is always careful to remind us that Spidey’s villains directly affect the man behind the mask. Parker’s growing relationship with Mary Jane, his crumbling one with Harry Osborn, and his sense of guilt and anger over his Uncle Ben’s death remain the character’s most potent concerns. Bad guys are secondary.

Spider-Man 3 begins where Spider-Man 2 left off: with the previously uncertain relationship between Peter and M.J. now romantically embraced, Harry Osborn hell-bent on killing Peter/Spider-Man in revenge of his father’s death, and Uncle Ben’s memory still haunting Peter. Appropriately spinning the melodramatic web, Raimi complicates his story line even more only to, in the end, resolve these conflicts present since the first film. As noble a theme as any superhero movie, Spider-Man 3’s characters at first seem obsessed with vengeance, but eventually turn to forgiveness. In the beginning of the movie, Spider-Man’s popularity among New York citizens has never been higher, Mary Jane Watson has a role in a Broadway production, and Peter is looking forward to asking for Mary Jane’s hand in marriage. But all that happiness quickly crumbles.

A thief and prison escapee named Flint Marko (Thomas Haden Church), on the run from police, stops to see his dying daughter and understandably angry wife. Marko insists his crimes were for the sake of his daughter’s health; any money stolen was done so only out of fatherly desperation. In Church’s few scenes, he’s able to give a character, little described in the comics, depth and a sympathetic persona. Like Spider-Man 2’s Dr. Octopus, Marko becomes someone thrust into villainy from tragedy: Marko hops a fence to evade police and enters a “particle physics” testing area (never a good idea), falling into a vat of sand. Suddenly, a whirlwind of sand and a little bit of mad science turn Marko into Sandman. Now composed of sand, Marko can disintegrate himself into a dust cloud, change his limbs into weapons, or alter his size exponentially based on how much sand is around to manipulate. The birth of the character in sand form is composed of breathtaking computer-generated images, showing Marko literally falling apart as he attempts to compile himself—clearly a metaphor for the film’s themes.

In another part of the city, Harry Osborne, fuelled on the same vapor stimulators that drove his father insane, carries out an attack on Peter. He’s unwilling to listen to Peter’s claims that Norman Osborn was killed because of his own villainy; Peter has no choice but to fight. When the battle is over, Harry finds himself in the hospital with short term memory loss, unable to remember his father’s death or his hatred for Peter. James Franco transforms with ease from a darkened wreck to absently cheery; Harry’s pleasant moments make us remember why it’s so painful for Peter to battle his best friend. Spider-Man 3’s greatest conflict, the one to which I felt the most emotionally attached, was the arc between Harry and Peter. Meanwhile, Gwen Stacy (Bryce Dallas Howard), who Spider-Man saves in an impressively filmed high-rise rescue, becomes a threat to M.J. and Peter. Gwen overtakes M.J.’s role of the rescued victim, so suddenly M.J. begins to wonder if Peter’s eyes are wandering. The women in the film, though typical superhero-movie damsels in distress, do more than get rescued. Granted, they’re not saving the world, but they’re pushing and pulling the hero, making this a story more about love than web-slinging battles. Moreover, if you think about the previous two films, Peter is constantly at odds with his romantic life—this characteristic is what makes Peter almost tragic in earlier stories.

For Peter, everything seems to have worked out perfectly. He’s got the girl of his dreams, celebrity, he’s at the top of his physics class, and his best friend that wanted to kill him suddenly forgot about their conflict. All is seemingly well, that is, until the police reveal to Peter and Aunt May that Flint Marko may be Uncle Ben’s actual killer, that the robber Spider-Man caught in the first film was simply Marko’s accomplice. Spider-Man’s desire for revenge becomes visually represented when his suit turns black. Covered with an alien symbiote delivered by a fallen meteorite, Peter unquestionably accepts his suit’s new form; it affords him great strength and power, but also furthers his desire and hatred for Sandman. Peter is warned that symbiotes feed from their hosts, but feeding on his own emotions, Peter embraces revenge and hate, outcasting himself from his friends. Enter Eddie Brock (Topher Grace), Peter Parker’s competition for the photographer position at the Daily Bugle. The soon-to-be host to the alien symbiote, Brock’s life is ruined by Peter. Undercutting him in both professional and personal realms, both Peter and Spider-Man humiliate this character, who eventually becomes the empowered personification of negative emotions: Venom. With Brock, Osborn, and Parker all seeking out their dark pursuits and revenge-crazed missions, only Sandman remains sympathetic, just trying to get enough money to save his daughter’s life. In comparison, Peter Parker is more of a villain than the misunderstood Sandman; Peter goes out of his way to make sure Flint Marko dies… only there’s no killing a man made of sand.

From a story by Sam Raimi and his brother Ivan, there’s clearly subplots abound, more than some fans of the series will be able to tolerate (Indeed, it’s taken me the length of a normal review just to explain the plot’s intricacies). Ideally, I feel there should have been fewer characters (Perhaps delete Venom from the last act?), but the story works as a sort of confused puzzle just barely assembling in the last few scenes. (This is where my examination shifts from movie reviewer to comic book fan.) Venom’s inclusion into the film could have been omitted and it would have felt less rushed. That character had great possibility on its own, and while the film works with Venom’s presence, the comic book fan in me realizes Venom deserved a story of his own… mono a mono with Spider-Man. In the comics, Venom’s duality and polarity from Spider-Man made him the ultimate Spidey villain. Venom’s few scenes in the finale, while incredibly well executed, make the character but a postscript, whereas Topher Grace’s fine performance as a cocky, underhanded Eddie Brock deserved more time. Sandman’s character more than amply could have filled Venom’s small filmic shoes in completing the continuing stories finalized in this third Spider-Man installment. In fact, based on what I’ve read, that was Sam Raimi’s initial plan.

Raimi never intended Venom as a part of the storyline. Marvel producer Avi Arad pushed for the character’s appearance, hoping to quench fans’ collective thirst for the symbiotic Spider-villain. He said, “Once we finished the story, Avi [Arad], our producer and partner and the former head of Marvel comic books, said, ‘Sam listen, you are so aware of all of these ’70s villains, but you really need to incorporate Venom into this story because the fans really love Venom and don’t be so selfish with villains that you know and love.’ So I said, ‘Okay.’ I didn’t understand that much about Venom because I hadn’t read him as a kid. So I went to school on Venom and Avi taught me a lot about Venom and then Alvin Sargent, our screenwriter, he really was the voice of Venom and the writing of the screenplay and he showed me who he was.”

It was clear Raimi didn’t grasp the popularity or range of the Venom character; beyond the obvious physical monstrosity, there’s a violent inner demon between Brock and the alien symbiote (which together referred to themselves as “we” in the comic). Like the depiction of X-Men’s Dark Phoenix Saga (considered the X-Men plotline) in X-Men: The Last Stand, Venom becomes supplemental to a greater storyline. While this works within the dumbed-down context of this movie (which is why I’m giving the film a fairly positive rating), for fans of comic myth, Venom seems exceptionally misrepresented. Comic fanboys, which make up only a small percentage of the audience for these Hollywood crowd-pleasers, may not be shunning this movie on the internet had Raimi given Venom his due time.

All of this comic book talk won’t matter to the average moviegoer, however. Raimi makes his picture just as fun as the previous two, complete with another hilarious cameo by Raimi cohort Bruce Campbell, and of course J.K. Simmons stealing every scene he’s in as J. Jonah Jameson. Grandiose battle scenes with Sandman had my mouth literally open with amazement, as Raimi went to great lengths illustrating the unpredictability of Sandman’s powers. Like all the Web-Head’s villains thus far, Sandman is a victim before he becomes a criminal, making the fight sequences less about web-slinging and more about character development. Though some critics have complained that the film is action-light and romance-heavy, in retrospect, each of the three Spider-Man movies offers only a handful of hero-villain showdowns. Akin to its Spidey predecessors, Spider-Man 3 seeks to mend characters rather than tear apart New York City, so while this superhero soap opera might delve deep into Spider-Man’s emotions, there’s plenty of wall-crawling action to appease.

The plot never lulls. Raimi infuses it with his signature style for sensationalizing the filmic mythology he’s created for this franchise. Given that this film now closes out his series of Spider-Man storylines, I must admit I would like to see the director move on. I’m a great fan of his work (The Evil Dead movies, A Simple Plan, The Gift, Darkman, et al), but it’s time for Raimi, who apparently wavered in this third Spidey film when put under the comic fanboy gun, to move on to hopefully greater work. I don’t blame the director for giving in to fan demands, as it’s obvious Raimi received some lofty pressure to include Venom. Without a doubt, I know Raimi’s original vision for the film would have been more streamlined, better fitting with the previous two pictures. (I would have loved to see a Spider-Man 3, with the same themes, contemplate just one villain alone, either Sandman or Venom, to close out Raimi’s mythos.) As is, I won’t call the film fat, just stalky—in the most pleasant way possible. For all of its faults from a comic book fan’s standpoint, the film is wonderfully entertaining from a film critic’s position.

Raimi’s film does exactly what it set out to do: tie off the pieces first woven in 2002’s Spider-Man, allowing Peter Parker and Mary Jane future adventures without having pre-established loose ends hanging about. The major problem with Spider-Man 3 is expectation; we go in hoping for one thing, but get another. That’s not to say “the other” is necessarily bad, just different. Which is why I’d recommend seeing Spider-Man 3 twice: once to get your expectations out of the way, and a second time to sit back and enjoy the energetic drama Raimi has put to film.