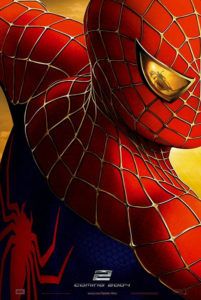 Furthering the mythology established with his first Spider-Man film, director Sam Raimi elevates the material even more in Spider-Man 2, making the title character notably tragic and afflicted by his superhero aspirations. Does he choose to follow his Uncle Ben’s lesson: With great power comes great responsibility? Or does Peter Parker resolve to simply be Peter Parker? The film begins with Parker late for work delivering pizzas; when he reports back to his boss overdue, he’s fired. He can’t pay his rent. He has no social life. Raimi reveals Parker to be a mess: never on time, behind in his college studies, and always letting his friends down. But Parker can’t help it… Web-slinging is more than a full-time job. With more elaborate special effects, a villain as sympathetic as the hero, and commentary throughout on Parker’s push-and-pull struggle to resolve the relationship between his life behind the mask and his life without it, this sequel outdoes the original film in almost every way by taking a human look at a super-human character.

In response to his ongoing anxieties, Spider-Man’s powers waver. While web-slinging one night, he suddenly can’t “perform.” Without a web-producing equivalent to Viagra, Spidey finds himself unable to climb walls or sling web; even Parker’s poor eyesight returns. Without powers, he’s no longer conflicted by his sense of superhero responsibility, so Parker can finally just be Parker. He changes his life, betters himself in school, and concentrates on being there for his friends.  This, of course, means he can pursue Mary Jane Watson, only she’s engaged to be married to someone else (she’s clearly not happy with the engagement, however, as she kisses her fiancé in the same upside-down style in which she shared with Web-Head). But for how long can Parker look away while criminals, like the one that killed his Uncle Ben, go free?

Meanwhile, there’s Harry Osborn, now head of his father’s business Oscorp; he backs prestigious scientist Dr. Otto Octavius (Alfred Molina) in a venture to create fusion technology that would provide the world with a perpetual source of energy. Student Parker has followed Octavius’s work, and when Harry arranges for the two to meet, Parker and Octavius develop an intriguing student/mentor relationship (making their subsequent conflict heart-wrenching). To control his fusion experiment, Octavius uses four large indestructible metallic arms attached to his waist and spine; when something in the experiment goes wrong, an explosion kills his wife and the arms are fused to Octavius’s body. The normally inhibited arms gain a life of their own, influencing the scientist and sending him into madness. At the end of the first movie, Harry Osborn saw Spider-Man with the dead body of his father. Assuming it was murder, Harry swore revenge on the Wall Crawler. After the Oscorp-funded experiment goes awry, Harry has nothing. Consumed with hatred, he offers the now-wisted Dr. Octopus (a name dubbed by boorish newspaperman J. Jonah Jameson) a proposal: Harry will give Doc Ock the needed resources to retry his experiment… if he will bring Osborn Spider-Man.

Staged like a melodrama, Raimi once again completes Spidey’s blockbuster experience by giving audiences more character than action. Love stories remain the axis on which all characters teeter: Parker and Mary Jane; Doc Ock and the loss of his wife; Harry and the love for his “murdered” father; Aunt May and Parker mourning Uncle Ben. Because of these relationships, we’re never more concerned about special effects or elaborate action sequences than character progression. Not to suggest the special effects in this picture underperform; rather, they far exceed the first movie. Spider-Man’s critics have no opportunity to complain that the hero swings through the city cartoonishly, as Spider-Man 2’s visuals vastly progress such tricks. Doctor Octopus’s arms alone dazzle every time the villain appears onscreen. While in the first film Green Goblin, the madman villain, wore an expressionless mask, here Doc Ock remains as sympathetic as Spider-Man. Like Peter Parker, Octavius loses everything, his wife and career, and becomes victim to mechanical dictatorship of his automaton arms; they twist his mind to something maniacal. The underused Alfred Molina portrays the villain with compassionate airs, humanizing him as a victim of circumstance and tragedy—someone Spider-Man respects too much to hate. Placing Molina in the role shows Raimi’s clever eye for offbeat-but-ideal casting choices (similar to Willem Dafoe as Green Goblin).

In one of the best, most Raimi scenes in the picture, doctors attempt to remove the arms from Octavius just after the accident. Octavius is unconscious, but the arms tear through the operating room. Raimi shoots this scene with an array of energetic camerawork and bravado editing, making a murderous montage topped only by the shower scene in Psycho or the head-on car collision in Death Proof. Resembling something out of Raimi’s Evil Dead II, one doctor grabs a chainsaw, and swish, a quick zoom. Mesh in point-of-view shots from the robotic arms—brilliantly shaky like the deadite POV shots in The Evil Dead series—and Raimi proves how much creative control and freedom he was given to work with after the success of Spider-Man.

We’re again graced with a cameo by Raimi collaborator Bruce Campbell, this time giving a hilarious performance billed as “Snooty Usher.” Ted Raimi reprises his role as Jameson’s office stooge, and Evil Dead II alum Dan Hicks even shows up as a subway train passenger. Several new scenes are added into Raimi’s director’s cut DVD, called Spider-Man 2.1, and are worthy enough for fans of the film to justify double-dipping on the home video release. One short scene shows Parker listening to a police scanner in his apartment and clearly articulates how the hero never goes off duty, thus his desolation. Other scenes build on Mary Jane’s indecision about getting married or Parker’s newly embraced love for her. Topping the eight minutes of new footage is a humorous bit where hardened fathead J. Jonah Jameson hops about his office in an abandoned Spidey costume, spinning imaginary webs with his own vocal sound effects. Released a few weeks before Spider-Man 3, it’s clear the DVD is a marketing tactic. But frankly, it’s a worthwhile one.

Raimi’s vision and power over this series eclipses blockbuster expectations, executing a perfect balance of fully described characters and superhero action with the best imaginable special effects. On par with X2: X-Men United and Batman Begins, Spider-Man 2 stands as one of the best superhero movies ever made, as, like those films, the characters foundationalize the narrative in every respect. The film is guided by emotions and the interplay of character drama, while the action scenes provide fantastically arranged escape and thrills, made all the more wowing from our investment in the fates of those onscreen. Now in a new DVD that includes valuable scenes to this already exemplary film, the Spider-Man 2 experience coagulates where other blockbusters fall apart. Raimi, a singular voice, preserves his absolute creative control, championing with great skill the comic book mythos of Marvel’s most human superhero.