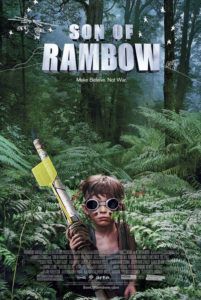 When I was a young boy, reading comic books enticed me to run through nearby woods pretending I was Wolverine, or any number of my favorite superheroes, fighting the evil Tree People made up from somewhere in my imagination. Dead branches became long skeletal fingers reaching outward. Vines turned into entangling ropes. Swampy puddles boiled into deadly lava pools. Little children do that, I suppose: take inspiration from what they read, hear, or see. The all-powerful influence of art, in whatever form it may take, tends to have this effect, which is what makes it beautiful. Occasionally art inspires art. In the case of Son of Rambow, the 1982 Sylvester Stallone actioner First Blood inspires two English boys to make their own home movie.

Will Proudfoot (Bill Milner) belongs to his mother’s religious faction that forbids his exposure to any unnatural stimuli, everything from television to music—even watching educational documentaries in school. Nevertheless, he occupies himself with inspired cartoonish drawings and flip-book animations of impossible animals and surreal landscapes. Clearly, no other stimulus is needed. Lee Carter (Will Poulter) is the renowned school bully, scamp, and all-around bad boy. Though on opposite sides of the social spectrum, the two meet by chance and Lee commissions… correction: cons Will into becoming his stuntman in his new movie: a home video redo of Rambo’s first filmic adventure.  Lee invites Will back to his home, an apartment attached to a nursing home presumably owned by Lee’s far and away mother. In the garage, videotapes cover a wall, all bootlegs recorded on the camcorder at the local cinema. Here Will catches his first ever look at film, badly recorded from a distant side angle, no doubt with the cigarette smoke of mid-1980 moviegoers passing through Lee’s shot. When the film ends, Will runs home, his imagination bursting with possibilities.

It’s been decided—their film will be “Son of Rambow” from a story by Will using Lee’s camera. Both are in terminal need of a father figure; Lee’s split shortly after his birth, and Will’s died seemingly not too long ago. John Rambo will do for now. And that fact figures largely into their plot, involving the rescue of Dad, aka Rambo(w), from an evil can-head scarecrow. Taping up household products into makeshift guns, swinging from tire swings for elaborate effects, and splicing-in the occasional sequence from First Blood for good measure, the boys make their film without much by way of consequences for the amount of danger they’re placing themselves in.

Eventual blood-brothers, their dynamic duo is soon split by ultra-hipster French foreign exchange student Didier (Jules Sitruk), who carries behind him a tail of followers copying his big hairstyle and totally rad clothing. Set on a rural English countryside, few have become devotees to Didier’s MTV generation, but deem his overt cigarette smoking and casual making-out idol worthy. When Didier takes an interest in their video production, he overtakes Lee and Will’s friendship, which until then was simply about finishing the video. In true Hollywood fashion, the friends don’t realize how much they need each other until they’re separated.

I’m glad writer-director Garth Jennings, helmer of the underperforming adaptation of Douglas Adams’ sci-fi comedy The Hitchhiker’s Guide to the Galaxy, chose the first in the otherwise blatantly violent Rambo movies on which to base his children’s affections. There’s a humanism (and almost nonexistent body-count) lining that picture that disappears in its immediate sequels, which are more exercises in explosions and warfare. Indeed, the human innocence in the boys’ imitating violence seems so far away in today’s society, where toy weapons are all but banned and children who play at war are sent to the counselor. And thusly, this probably isn’t a movie for your child, rather your own inner child, as stuffy adults won’t find much past the sweet sentimentality throughout.

Jennings finds a way of making their production into a joyous process of collective creativity, far away from the eyes of any parent, which few children today have the luxury to benefit from. Such good-natured goings-on could never occur in our communities, as children are watched by hawk-like parents, sucking their children’s imaginations dry. And yet, seeing this movie inspires one to become an amateur filmmaker, if only to have as much goofy fun as everyone onscreen. Jennings’ love letter to the importance of art, specifically film, and friendship in a child’s life is endearing if formulaic, and will surely leave audiences welling up with tears.