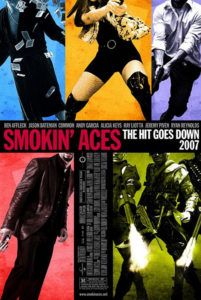 The first half of Joe Carnahan’s second film, Smokin’ Aces, exists in an orgy of violence, revving-up its audience for something great that never comes; the second half enters predictable detective story territory, filled with gratuitous emotion so uninteresting in a film this violently superficial that we’re left thinking, Huh?! On the top floor of a Lake Tahoe Hotel hides Buddy “Aces” Israel (Jeremy Piven), a Las Vegas magician and mob contact-turned-informant for the FBI. With his informer cover blown, the mob wants Buddy dead. Five or six different groups of hit-men are hired to take Buddy out: a Latin sadist; a mercenary group of three brothers; two lesbian assassins; a mysterious Swedish hit man; and a chameleon-like killer whom no one has ever seen. Oh, and I almost forgot the FBI and a group of bail bondsmen are after Buddy too…

In the first ten minutes of the picture we’re introduced to characters via a BAM!, freeze frame, then titles: “Bail Bondsman JACK DUPREE.” We’re told their names because chances are they won’t be around long enough for us learn. Needless to say, with around twenty main characters, both cops and crooks, this device goes on for too long and gets old fast. Each of the actors (and there are several good ones in the cast), plays an eccentric, memorable role. Matthew Fox of TV’s Lost, with his goofy mullet wig and oversized glasses, has a pleasant, three-minute cameo. And then there was Jason Bateman’s sleazy self-abusive Vegas good-for-nothing, riddled with cold soars or oral herpes, who is locked away alone in a dark hotel room (except for the head to an Easter Bunny costume; why he has that head, we never know…)

There’s not too much we do learn about these characters beyond Good Guy or Bad Guy (and even then, most of the Bad Guys are good and most of the Good Guys are bad). If the film would have stayed that way, I might have enjoyed it. Manic camerawork, bloody gun battles, and quirky-yet-cruel humor flood the screen during the first two-thirds. But after an hour and ten minutes of a Who cares!? attitude toward the barrage of characters, Carnahan changes his tone as though we’re suddenly supposed to care when people start dying.

The rock and punk music score mutates into a somber orchestra; cranked-up action sequences become slow-motion ballads. But no event serves as catalyst for this change. Audiences are suddenly and clumsily asked to care for the few characters to survive, but since Carnahan hasn’t given us any reason to, we don’t. Instead, I felt awkward and maybe a little betrayed that the film changed tone so drastically. If the tone had remained identical to the first two-thirds, I’d probably be raving about how much fun this picture was.

Carnahan is best known for Narc, a superb cop thriller, which also starred Ray Liotta. My expectations were high for his next feature, so when I saw the cast for Smokin’ Aces (Ryan Reynolds, Ben Affleck, Andy Garcia, Alicia Keys, Common, Peter Berg, Alex Rocco—among others) I was understandably excited—there are some big names involved. Carnahan is distinguished, possibly lamented for having passed down the opportunity to direct Mission: Impossible III; he was attached when Scarlett Johansson and Kenneth Branagh were set to star alongside Tom Cruise. Carnahan left and was replaced by Lost writer and producer J.J. Abrams; Johansson and Branagh both dropped out too. The result for the third Mission: Impossible film was so-so. Last year, I couldn’t help but wonder how much better M:I III would’ve been with Carnahan in the director’s chair. That was before I saw this film. Smokin’ Aces had potential, but its inconsistent tempo and mood make for an hour and ten minutes of entertainment and another forty minutes of head scratching over-emotionalism. For that reason, audiences will go hoping for Guy Richie, but will get something less organized and inventive.