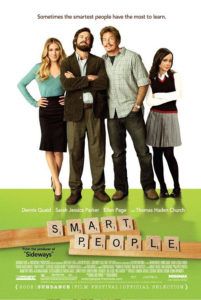 Oh, the burden of being smarter than everyone else… With few friends and little by way of social skills, you’re destined to know your own superiority, though only a small minority of the population is capable of appreciating it. Able to walk through life with your head up and nose down on the uneducated masses, you remain plagued by your own intelligence quotient. At least, that’s what the characters from Smart People, a pretentious little movie attempting to be clever but instead feels desperate, believe.

The story begins with Lawrence Wetherhold (Dennis Quaid), a pompous widower and Literature professor lecturing at Carnegie Mellon University in Pittsburgh, Pennsylvania. Complete with protruding stomach, beard, and corduroy jacket, Wetherhold embodies the Hollywood stereotype for university instructors, which, in my experience, more often than not, reigns true. His daughter Vanessa (Ellen Page) follows closely in his footsteps, enthralled by the Young Republicans and long discussions of all things scholarly. His son James (Ashton Holmes, from A History of Violence), though publishing poetry in The New Yorker, keeps reasonable distance from his highbrowed kin, afraid of becoming as coldly erudite as they have.

Lawrence can’t seem to get his latest book published, and years of snobbish behavior have left him severely disenchanted. Upon taking a fall, he winds up in the hospital, treated by former student Janet (Sarah Jessica Parker) for a trauma-induced seizure. Now prevented from driving because of his injury, luckily his adopted brother Chuck (Thomas Haden Church), a goofy and unemployed sort who can’t seem to keep his bare ass off the screen, can act as Lawrence’s chauffer. Meanwhile, Lawrence is still getting over his dead wife three years after the fact, but asks Janet on a date nonetheless. Their subsequent relationship is curious, since he remains haughty and she opaque—we can’t understand what they see in each other, and yet, they belong together.

Vanessa doesn’t think her father is ready to date again, feelings which surely derive from jealousy, as she’s played den mother for her dad since mom died. Parental input comes infrequently in lieu of her intelligence; she’s undoubtedly grown up too fast, given too much room by her father, and Chuck, now living with the family, recognizes this. Chuck tries to lighten her up, exposing her to marijuana and such, but his plan to bring her out of her shell backfires when she kisses him. Their entire dysfunctional family proves that even the smartest folk are susceptible to dumb decisions.

Director Noam Murro makes some poor choices, particularly when selecting the music; cerebral characters have their emotional trials set to gimmicky feel-good acoustic tunes more apt to your typical romantic comedy. Tonally reminiscent of Little Miss Sunshine, where morose characters are enlivened by the good-humor of a single family member, the film keeps laughs coming thanks to Thomas Haden Church’s deadpan sarcasm and off-key remarks about the stupidity of over-intelligence. Witty interplays transpire between Ellen Page and Dennis Quaid; they’re funny, I suppose, but never so much that I really enjoyed this story…

None of these characters find any resolution within Mark Poirier’s script, a common piece of writing given the recent influx of intelligent pseudo-independent comedies. We can sense that resonant hum of the Hollywood factory, in this case Miramax, doing everything they can to appeal to both art-house and commercial cinemagoers. No such luck; art film buffs will find the material transparent and commercial audiences will be unable to relate to anyone onscreen. I guess I’m somewhere in between, as I had both reactions.

Smart People reminded me of intellectual angst dramedies like The Squid and the Whale and Wonder Boys, except not nearly as charming and more obviously self-conscious. Trying to achieve the quirky-yet-charming balance achieved by its betters, Poirier’s characters lack connectivity, since throughout they remain utterly severed from each other. We walk away without understanding what drives them, aside from their academic pursuits and pathetic attempts at social living. Perhaps that’s supposed to be their charm. And if so, we should have been allowed to see them blossom into something more than what the title suggests.