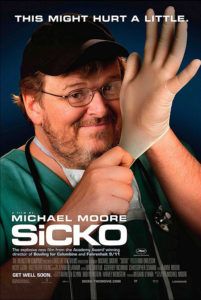 In the opening credits of Michael Moore’s latest documentary, Sicko, we’re introduced to a man who accidentally cut the tops of his middle and ring fingers off on a table saw. Being a middle class man with few financial resources, he had a choice, pay $60,000 to reattach his middle finger, or pay $12,000 to reattach his ring finger. Later in the film Moore takes us to Canada, where a man cuts almost all of his fingers off, again in an accident. Only the Canadian’s fingers are immediately reattached because that is what’s best for him. The cost: nothing. I doubt there’s a single American that hasn’t had some beef with his or her health insurance. Myself, I just got a bill for $223 from an appointment nine months ago where the doctor cleaned my ear passage. I called and asked why; they said because it was an “unusual” procedure. Is our healthcare system based on normality? If getting sick or injuring ourselves in an accident was normal, then we wouldn’t need doctors, therefore wouldn’t need healthcare. But it isn’t, so we do. Many of the people interviewed by Moore say their health insurance companies denied them coverage because the recommended treatment was “experimental.” Does this mean all treatment must be established treatment? Who are these insurance companies to be dictating what is necessary or best over our doctors? And why do countries like France, England, and Cuba have better healthcare than the U.S.?

Unlike his past films Bowling for Columbine and Fahrenheit 9/11, Moore doesn’t resort to cheap shots (at least, not until the last 15-minutes). It’s his least self-centered documentary; he doesn’t appear in front of the camera until about half way through the picture. Even then, his argument is not necessarily a political one in terms of democrat and republican, but one of humanism. Moore carefully and sensitively asks important questions, pointing the finger at big business, and greed, for denying Americans the right to free healthcare. He cleverly shows us a list of preexisting conditions that health insurance companies screen for when considering an applicant, rolling up the screen like the prologue from Star Wars. The list goes on and on, as if insurance companies expect someone in need of healthcare to be in tip-top condition. But even if, miraculously, a person were to get through the screening process, the benefits are slim. Moore shows us case after saddening case where people are put into debt because of medical costs. It’s pointed out that ill Americans have no choice, “Shackled with debt, you don’t have the freedom to choose.”

But isn’t that what America is all about—freedom? Ha-ha-ha, Moore would laugh. It’s hard to disagree when we’re constantly told to be afraid, advertised to “ask our doctor” about this disease, or if we might have that condition. We’ve become a nation of hypochondriacs and most of us don’t even realize it. I think Americans know the medical field is a business; that’s no secret. Anyone who thinks otherwise is kidding themselves. We’re number 37 in worldwide healthcare, as Moore points out. But aren’t we the richest country in the world? Aren’t we the freest country in the world? Don’t I always hear how this is the best country in the world? If so, why is it that volunteer rescuers and cleanup crews at Ground Zero were denied healthcare by the federal government, even though they’re just as heroic as the NYFD and NYPD? The reason: the government didn’t ask them to help.

Then again, as Moore points out (with obvious reference to the Iraq situation), “We’re Americans, we go into other countries when we need to.” Socialized medicine has been viewed as a communist ploy, at least in American politics—crazily seen as a plot to slowly turn out country into a socialist one. Moore outlines first how our own healthcare system works, and then moves on to other countries sporting universal healthcare. It’s sobering, depressing, and hurtful, given the truth to what Moore is saying. The American media and politicians claim that the Canadian, French, and British get free healthcare, but they have to wait months before they get an operation—by that time they could be dead. Moore follows one 22-year-old American woman who finds herself denied coverage for treatment of cervical cancer because her insurance company says “she’s too young to have cervical cancer.” She goes to Canada, where she pretends to be common-law wife of a Canadian friend of hers, and she’s treated the same day. So what were U.S. politicians talking about when they said Canadians had to wait for months?

Particularly shocking was Moore’s time in Cuba, another country supporting universal healthcare, this one considered third-world. Moore brings along some of his American interviewees with health problems, ones poorly treated or not treated at all in America due to their financial constraints. In Cuba they needed only fill out their name and birth date; within moments they’re in hospital rooms, getting tests, crying because it’s all free. One woman, a 9/11 volunteer, finds that her inhaler, which costs $120 in America, costs only 5 cents in Cuba. All of these countries with socialized medicine are similar: no cost, little paperwork, and concentration on what’s best for the patient. Moore doesn’t sweeten the argument too much, however, at least not for white collar folk. Taxes in countries with socialized medicine are higher for those who have the money, paying for those who do not have the money. But that’s partly why countries like Canada, England, and France have more communal societies; there’s a general caring for one’s countryman that is absent from present-day America. It was a brief side-effect of 9/11, surely, but it has since dissipated.

Moore avoids his usual stunts and absurdities for the most part. Yet he cheapens the film by taking his group of ill interviewees to Guantanamo Bay prison, where the U.S. keeps political prisoners behind 9/11, who according to reports, get free state-of-the-art healthcare, better than any of Moore’s interviewed Americans are getting. On a boat with a bullhorn, shouting to the Guantanamo Bay tower that these 9/11 volunteers just want to get medical attention equal to the “evildoers”, Moore pulls down his credibility. He further lowers himself by referencing an anti-Michael Moore website owner whose wife became ill and had to choose between his website and his wife; Moore self-promotes by pointing out the fact that he anonymously cut a $12,000 check so the guy could keep spouting Moore hatred online (although it’s not exactly a secret now, is it?). Even with these two distracting-yet-exclusive moments of self-indulgence, his universally human argument isn’t lost.

Though Michael Moore has been attacked for being anti-American, I think his heart is in the right place. He weaves a clever piece of propaganda, in the best possible way; and even if you don’t buy every statistic or bit of information he offers, no one can deny the credibility of his thesis. Moore doesn’t blindly follow whatever our government decides. He recognizes our country was founded on revolution, and in way, I think he hopes for a similar response to today’s problems. Perhaps not a violent one, but a general compassion by Americans for themselves and their own country. He asks several times, “What have we become?” or “Who are we?” I’d challenge anyone to answer that question without an “um” in there at some point. He asks that we care enough to stand up against our government’s open hand to insurance company’s lobbying and payoffs. Moore points out how the French love their country enough to protest when something is wrong, that France’s government fears its people, whereas Americans fear their government. Given America’s origins, that doesn’t quite seem right, does it?