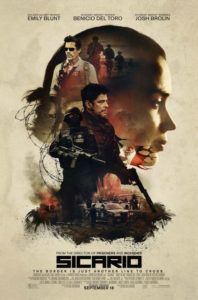 Another sharply crafted thriller from Denis Villeneuve, the Canadian director of Prisoners (2014) and Enemy (2014), Sicario delves into the ruthless world of the drug cartels, and the Mexican-American collaboration to stop them. A U.S.-led task force assigned to take down a drug kingpin launches the film into a deliberately-paced mission south of the border. Villeneuve works from a script by first-time screenwriter Taylor Sheridan, whose inspiration no doubt derives from the political machinations of Traffic (2000) and the pitiless violence of The Counselor (2014) or No Country for Old Men (2007). Despite familiar elements regarding the personal conflicts or entire lack of emotion felt by officers involved, Villeneuve’s stylish and measured treatment of the characters and familiar situations makes the film stand out among others like it.

The title’s “sicario” means hitman in Mexico, although the full implications of the title are not fully grasped until the final scenes. When Kate Macer (Emily Blunt), a tough SWAT-team specialist for the FBI, helps unveil a house full of corpses hidden in the drywall and left by the cartels, she volunteers for a special assignment that promises her some payback. Forced to leave her green partner, Reggie (Daniel Kaluuya), behind, she’s teamed with several mysterious new compatriots. Her boss (Victor Garber) signs her over to the cheeky Matt (Josh Brolin), who first appears in flip-flops and who’s a take-your-pick member of the alphabet soup (CIA, DOD, etc.); she and Matt are soon joined by the tight-lipped, steely Alejandro (Benicio Del Toro), who seems to be working both sides of the conflict.

Their first mission involves breaking several laws and international mandates, including opening fire in a crowded public place on the Mexican side of the border, and torturous interrogation tactics (forget waterboarding; this critic has undergone several mastoidectemies, and so I cringed at the finger-in-the-ear torture). But their methods seem to work, even if Kate protests their harshness and doesn’t fully understand the purpose of every maneuver. Nevertheless, their disregard for jurisdictions and the rules of engagement produces results—the kind that rustle up more cartel goons in retaliation, which means mistakes, and thus opportunities for additional arrests to be made. Among the retaliators is at least one you might not expect. One of the film’s best, most intense sequences involves Kate trying to unwind, until someone’s hands are around her neck.

Blunt’s character affords the actress a chance to pull off a complex portrayal, with Kate’s rather naïve sense of moral justice confronted in the face of gritty, unfeeling people both on her side and against her. She remains steadfast in her moral position, even as the story moves more into the mysterious Alejandro and his personal stake in the mission. When the film reveals the reason for all of the killing and general feather-rustling, it’s somewhat of a letdown, and far too basic when compared to the complicated story earlier on.  After all, Villeneuve and his editor Joe Walker linger on gorgeous landscapes, shot in beautiful light captured by cinematographer Roger Deakins. The effect makes everything seem much heavier than it really is.

Loaded with harsh cartel violence including beheadings and torture, Sicario is not for the weak of stomach, nor for those who want everything to be wrapped up nice in a little bow. Not as post-modern as Oliver Stone’s Savages (2012, which also starred a sadistic Del Toro), but not as realistic as a procedural, Sicario moves along at a steady pace, drawing us into a quite basic scenario. Still, the sheer craftsmanship at work here, both behind the camera and in front of it, remains impressive and keeps our attention. Building slowly and methodically with the help of Icelandic composer Johann Johannson’s haunting, if largely tonal score, Sicario creates a sense of unease and ceaseless danger that digs under the viewer’s skin. Not unlike the director’s much-praised Prisoners, the film gets everything right without showing us anything we haven’t seen before.