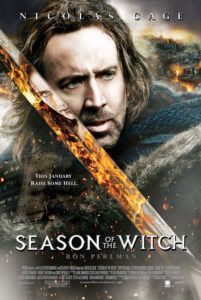 Season of the Witch would make sense if Uwe Boll had directed it for the SyFy Channel, except that’s not the case. Nicolas Cage and Ron Perlman star in a medieval mishmash of horror and historical epic, a swordplay yarn that could have been a lark had the filmmakers realized how corny their production would be. Instead, this dead-serious adventure fails to induce the proper reaction at every turn. Nothing about the movie works, and so its ability to cause unintended laughter might be its best quality for the right audience. For others, it’s an insulting piece of genre fluff that feels conceived by Dungeons and Dragons aficionados and executed with the sophistication of a hack-and-slash videogame.

Director Dominic Sena (Gone in Sixty Seconds, Whiteout) becomes the bastard son of Ridley Scott and Sam Raimi, evoking a sort of half-baked concoction of Kingdom of Heaven and Army of Darkness. Cage and Perlman star as Crusaders Behmen and Felson, two knights whose morals kick in when, after slaughtering hundreds in battle, Behmen inadvertently kills an innocent woman. They renounce the church for their accident and walk the earth until they come upon a town riddled with plague. A local cardinal (Christopher Lee) catches the deserters and offers them a deal: escort a suspected witch (Claire Foy) to an isolated monastery where she’ll be judged for her probable evil, and the knights will be pardoned for abandoning the church. And with the girl exorcized, the plague she supposedly caused will clear the surrounding lands.

Bogged down by shoddy special effects and a lazy performance by the leading man, the production’s disinterest in period detail becomes laughable within the first moments but proves to be saddening as the story progresses. The opening montage of Crusade battles suggests that Behmen and Felson single-handedly wiped out the Muslim enemy. But leave the history books at home for this one. Screenwriter Bragi F. Schut ignores fine points such as accurate dates and locations, citing numerous battles, like those at Artah and Tripoli, as taking place in the 14th century, as opposed to their actual dates some two hundred years earlier. The filmmakers also instructed everyone onscreen to use their best American accents, avoiding even the customary (if also inaccurate) British accent of traditional period epics. Even Stephen Graham, an actual Brit, assumes a Brooklyn accent that’s nothing short of baffling. What’s more, Cage and company use contemporary lingo, filling the dialogue with historically off banter and swearwords that are frankly grating to endure in this setting.

Cage plays this one on autopilot, uncaring enough even to leave the blond highlights in his hair for this rugged knight role. With Season of the Witch on Cage’s resume, it’s becoming increasingly challenging to defend his status as a respectable actor; despite his enthusiasm and his occasionally brilliant performances, he keeps taking dull paycheck roles and in turn makes it difficult to be a Cage apologist. On the other hand, Ron “Hellboy” Perlman doesn’t stretch his talent either, but it’s good to know he’s keeping busy. At least Perlman looks like he belongs under medieval armor, whereas we suspect at any moment Cage’s Behmen will climb on a motorcycle and disappear into a Bruckheimer action movie.

Still, the basic scenario of Season of the Witch has potential for ooohs and aaahs. Medieval knights on dangerous and moody terrain are toyed with by a caged tormentor. Neat idea, right? If only the production value wasn’t so cheap and the writing so inane. Aside from the ambiguous (if not nonsensical) stakes, Foy’s taunting equates to little more than shifty eyes and the trails of our heroes never become weighty or scary enough for us to care. And since the characters remain hardened clichés, there was never any hope for the audience to become dramatically involved anyway. Plenty of gooey plague gore pushes the PG-13 rating limits, yet even horror fanatics will have trouble not comparing the movie’s numerous tonal misfires to Van Helsing (an experience best forgotten, like this one). By the third act finale, which comes complete with cartoony CGI demons and fiery death scenes, the viewer will struggle to keep their eyes open, and afterward, there’s little to dwell on except the feelings of confusion and annoyance.