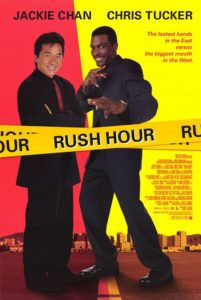 The Americanization of Hong Kong movie legend Jackie Chan began with the 1998 action comedy Rush Hour, assuring that over the subsequent five years or so Chan’s career would dive into buddy movie mode. From this film came two Rush Hour sequels, two Shanghai Noon movies, and yes, even the dreadful remake of Around the World in 80 Days. As buddy movies go, there’s Mel Gibson with Danny Glover in the Lethal Weapon series, Bruce Willis with Samuel L. Jackson in Die Hard With a Vengeance, and Nick Nolte with Eddie Murphy in 48 hrs.—all rely on a racially mismatched pairing. Chris Tucker plays Jackie Chan’s buddy in this buddy cop comedy. Tucker’s character Carter is a black LAPD cop with an attitude; Chan’s Lee is a martial arts-savvy detective from Hong Kong. Tucker enjoys impersonating Michael Jackson; Chan impersonates no man. Tucker’s bird-chirp voice never stops; Chan is a quiet hero. Neither wants to be teamed with the other, as both are loner police officers. “I work alone” is their motto. But together, they’re incorrigible.

The formula is like recycled paper: it works, but it’s a little more transparent than the original stuff. The story begins when a Chinese consulate’s daughter Soo Yung (Julia Hsu—a child actress who stands out in one scene with a hilarious Mariah Carey sing-along) is kidnapped by mysterious Chinese crimelord Juntao. FBI officials are on the case, though Consul Han wants Chief Investigator Lee from Hong Kong to investigate. The FBI doesn’t need some outsider poking his head into their investigation, so they get a babysitter for Lee. Enter LAPD screw-up Detective Carter, whose arrogance and reputation for bad boy antics has landed him a poor standing within his station. Carter eventually realizes he’s been assigned to a babysitting job, and after some initial conflict with Lee, teams with him to become an unstoppable duo. Or, as the movie’s tagline reads: “The Fastest Hands in the East Meet the Biggest Mouth in the West”.

Chan and Tucker have a chemistry that relies too much on their inability to understand each other’s culture. Carter, like most Americans, underestimates the “foreigner”, resulting in several hilarious moments where Carter has his pride handed to him by Lee. There’s plenty of racist humor to satisfy even the most microcosmic bigot, starting with composer Lalo Shifrin’s music score. Oriental melodies at their worst, the music derives heavily on rifts from stereotyped tunes frequently used when Americana references Asian culture. Many of the exchanges between Chan and Tucker are race-specific but are never too heavy to offend; it’s all meant in good fun, I suppose, which sort of eases the blows.

Jackie Chan completes plenty remarkable stunts to distract from the cliché plotting and outcome, so the movie remains mildly entertaining if you’re diverted enough from its shamelessly formulaic setup. It’s as though we go into a trance while Chan spars with bad guys or throws his body into some unbelievable predicament; we’re barely able to keep up with his quicker-than-lightning moves. Chan has done his own stunts for years, and in a way, whenever his stunts take over, we loose touch of the film. Who cares if the daughter is returned safely? Who cares if Juntao has followed Han to America?  For a moment, all we care about is Chan, not Lee, but Chan as he puts himself, not his character, in danger with every action sequence.

Rush Hour is a short, inexplicably-titled action comedy that keeps you entertained, if only because it barely exceeds an hour and a half and is immediately forgettable. If it was not so short, Chris Tucker’s high-pitched voice, which managed a mild hilarity with Friday but here is obviously played primarily for laughs against Jackie Chan’s straight man routine, would be intolerable. I might have enjoyed this movie more if it were made in 1989 when the buddy comedy was fresh; it has since become rotten fruit. If you look above, I’ve chosen a picture where Jackie Chan hangs from a Hollywood Blvd. sign; I realize now this is the perfect metaphor for Rush Hour: Jackie Chan Americanized to “safe” big-budget Hollywood blockbuster standards. While it’s nice to see Chan get some much-deserved attention in the American market, why not stick with something a little more Rumble in the Bronx and a little less Tango & Cash?