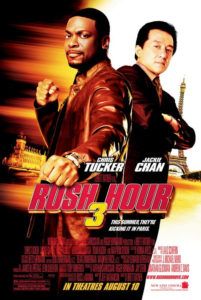 With 2007’s never-ending onslaught of blockbuster trilogies finally reaching their end, it’s fitting that the least-anticipated of the bunch comes at the ass-end of the summer. Rush Hour 3 caps off this year’s marathon of uninspired big-budget summer sequels—a list including Spider-Man 3, POTC: At World’s End, Shrek 3, Ocean’s Thirteen, and The Bourne Ultimatum—all which have relied on their same old tricks, only with less panache than their respective predecessors. Except with Rush Hour 3, director Brett Ratner and screenwriter Jeff Nathanson aren’t trying as hard to please as those other sequels; it’s as if they woke up one morning, six years after Rush Hour 2, and said, “Hey, wanna make a flick?” “Sure, dude, how about anudder Rush Hour?”

Brett Rater is the quintessential Hollywood director, in that he has no style of his own; he simply does what he’s told. He’s a grocer, selling a product to us by arranging it in a pretty-but-familiar way; it might catch our eye for a moment as we pass, but then we realize it’s just another pyramid of Hormel Chili. Been there, done that. Ratner’s movies are “safe” in the blandest possible way, sucking out any danger or originality from his filmmaking. His influences are clear (early Chan movies; John Woo; Lethal Weapon), as he borrows blantantly, as opposed to being creatively inspired. Never has Ratner made a movie where I wasn’t convinced of the film’s phoniness throughout. Rush Hour 3 is no exception. Though, instead of borrowing another director’s gimmicks, he recycles his own from the previous two Rush Hour movies. Once again we get Chris Tucker singing and dancing, we get Lee and Carter singing “War, what is it good for?” at the finale inexplicably, we get another white villain with Asian henchmen, and abandoned opportunities for Detective Lee to stop talking.

The plot brings back Inspector Lee’s superior, the former consulate, now Ambassador Han, and his daughter Soo Yung (this time played by actress Jingchu Zhang). Both are wrapped up in political warfare with the Triads, the worldwide gangster syndicate Han believes he can crack, since he knows the identity of their leader. When an assassination attempt is made on Han’s life by a hired gun whomInspector Lee seems to know, Lee takes it from Han’s coworker Varden Reynard (Swedish acting legend Max von Sydow) that the Triads have declared war on anyone who knows the identity of their boss. For one reason or another, their “investigation” leads them to Paris, where the Rush Hour franchise’s plans to Americanize the entire world ensue. They meet a cab driver, George (Yvan Attal), who says he hates America because Americans are inherently violent people; by the end, Carter and Lee have George driving like Steve McQueen and plugging bad guys like James Bond. They also meet a Frenchwoman named Genevieve (Noémie Lenoir), who replaces the sex object usually portrayed by a Latino woman in this series. Not as stereotyped as Asian cultures were in the previous two films, the French are referred to as “smelly” and “American-hating”—reinforcing this series’ adoration for racism-based humor.

Legendary director Roman Polanski (Chinatown, Rosemary’s Baby) has a cameo as a French police official, a role I am at a loss to explain. Perhaps Polanski wanted a paycheck, perhaps he’s a Jackie Chan fan, or perhaps he was forced by gunpoint. Whatever the reason, this movie is beneath him, however well-performed his role was. Through bland car chases, Carter’s non-stop preoccupation with sex, a contrived plot we’re never really interested or invested in, and transparent attempts to make us suddenly care for Carter and Lee as if they were emotional characters, Rush Hour 3 sleeps through its own derivative processes. Even the grandiose battle atop the Eiffel Tower was lacking appropriate gusto (frankly, I’m surprised they didn’t blow it up). There’s the occasional bit where Chan climbs a wall or slips through some impossibly narrow passage, but we’re not awed by his work here. I have every confidence that Chan is still capable of overwhelming physical stunts, even at 53-years old, but Brett Ratner is not the director to showcase those skills.

I’m not sure if there was an audience clamoring for another Rush Hour movie, and if ever there was, do they still hanker for it six years later? Almost unanimously poor (or at least disappointed) critical and audience reception of Rush Hour 2 wouldn’t seem to warrant this picture. Looking at Rush Hour 2’s impressive box office (upwards of $220 million in domestic dollars), it’s clear why this third buddy cop movie exists, if only from a business point of view. But it still boggles my mind how New Line Cinema has justified giving Chris Tucker $25 million for Rush Hour 3, part of a $45 million contract with them for the last two entries in this series.

I’ll save you the trip to imdb.com. Chris Tucker hasn’t worked since Rush Hour 2. He’s been defending Michael Jackson from media hounds, and by the looks of it, chowing down on Häagen-Dazs. Certainly not acting. Why should he have to? He’s earning more than Tom Hanks or Denzel Washington, even though he’s done only ten movies and he doesn’t have any Oscars or talent to validate such accomplishments. Everything about Rush Hour 3 is tired, especially Tucker. The action is filmed without a hint of energy; the plot ends before it really begins; and once again the best part of the film is the end credits blooper reel. I stated in my review for the first Rush Hour that that film should have been made in 1989 “when the buddy comedy was fresh.” If that’s true, Rush Hour 3’s worthy place is among the forgotten sequels like Lethal Weapon 4 and Beverly Hills Cop 3… all movies trying to kick whatever’s left of a long-dead horse.