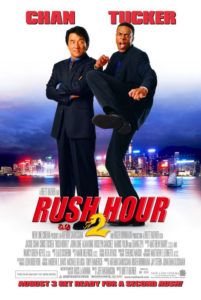 Just as the first Rush Hour encapsulated buddy movie clichés galore, insipid with its formula that offered nothing beyond an acknowledgment of Jackie Chan’s greatness, Rush Hour 2 reminds us that all blockbusters have their sequels, which in turn have their own set of movie tropes. The blockbuster sequel is supposed to give you more of what you loved originally; that would mean director Brett Ratner should have delivered more Jackie Chan stunts and fewer Chris Tucker rants. Instead, Wizard of Mediocrity that Ratner is, he decided to give us less Jackie Chan and more Chris Tucker. In other words, more talking, less action.

This sequel picks up where its predecessor left off, with Chief Inspector Lee (Chan) and Detective Carter (Tucker) enjoying a vacation in Hong Kong. When the American Embassy is bombed and two officials die, Lee makes it his duty to investigate, while Carter just wants to enjoy his vacation. Lee seeks out Triad leader Ricky Tan (John Lone), whose American partner Mr. Reign (Alan King) and ruthless henchwoman Hu Li (Ziyi Zhang) have it in for him. Lee and Carter uncover a counterfeiting scheme headed by Mr. Reign, which involves printing plates that issue flawless fake money. When Tan is killed during a double-cross, the investigation leads them to Las Vegas, where a new hotel and casino called Red Dragon is opening; Mr. Reign intends to pay out in counterfeit cash and take in real cash, with his clientele never the wiser.

Lee and Carter have almost gotten over their differences and resolved to be pals this time around. But mild racism and the embrace of stereotypes remains, so much so that Edward Saïd would be spinning in his grave had he seen the “message parlor” scene. If ever there was a typified Western view of the Far East, it’s displayed when Carter is allowed to select his own masseuse from a gang of attractive, barely-clothed Hong Kong women. Lined up in rows as if Carter and Lee had entered a brothel, Carter selects his masseuse based on appearance, bust size, and the whispers of the parlor’s manager, clearly a Madame. Saïd may have argued primarily on distorted Eurocentric or Americanized views of Arabo-Islamic cultures, but this movie gives his logic the perfect model from which to argue that Far East cultures are clearly subject to the same misrepresentation.

Rush Hour 2 expects us to believe that the majority of Asian women are submissive sex objects. Within the movie is its poor counterargument, Ricky Tan’s female thug Hu Li. But even with her tough feminine presence, she’s heavily sexualized, and still, in a way, an object as she is played by actress Ziyi Zhang—an actress found atop a dozen of the Top Beautiful People lists. Though Zhang’s character might contradict the movie’s complete submission to Orientalist fantasy, Lalo Schifrin’s silly Americanized Asian music score once again sounds like something that would have played in Leeann Chin circa 1930.

I am willing to accept that viewers want action-comedies, but when they star such a blatant one-trick-pony like Tucker, it’s clear we’re having our strings pulled for money’s sake. It’s a nasty, dirty feeling when watching Rush Hour 2; every so-so joke from the first movie is recycled with impotent effect here. There’s no new gimmick, no new jokes, villains are basically the same—hell, there’s even another Latino “hottie” for Carter and Lee to pair up with (Elizabeth Peña was in Rush Hour; Roselyn Sanchez is in this one). The best thing about Rush Hour was Jackie Chan’s impressive stuntwork. In this sequel, such stunts, even after reported complaints from Chan about how minimized they’ve become, were scaled down to concentrate on the film’s “humor”. We cannot enjoy this film even in the blind, wow-what-will-Chan-do-next way.

Chris Tucker earned an offensive $20 million payday from this movie, as part of a $45 million contract for two pictures with New Line Cinema (the other film being Rush Hour 3). I have no idea where that money went. Did it go to yet another Michael Jackson impression? To his rant at the Red Dragon craps table about how the dealer is a racist? I understand that New Line Cinema must attribute the grand success of the first Rush Hour to something, but why an unproven actor like Chris Tucker? He’s been in only a handful of movies, mostly in supporting roles. Did he deserve this payday, or was it simply overzealous studio heads desperate to make more money, and a clever talent agent negotiating to the limit? The best moments come with the end credits; first, indicating that the movie is ended, second, offering a collection of humorous outtakes. Most notably Tucker’s inability to say “gefilte fish”, an incident where Tucker’s cell phone rings during shooting, and how Tucker is incapable of remembering that his costar’s character’s name is not “Jackie” …It was the best $20 million New Line Cinema would ever spend.