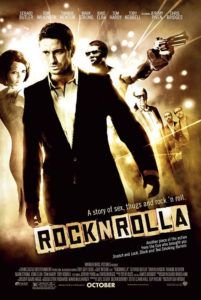 Modernizing romanticized gangster terms like “goodfella” with innovations rooted in both British and pop-cultures, Guy Ritchie’s RocknRolla follows a similar structure as Martin Scorsese’s classic 1990 crime picture, by identifying the ideal, and then watching as those trying to attain it crumble miserably. Ritchie’s characters chatter in occasionally unintelligible jargon, stumble about in their criminal plotting, just barely escape death or not at all, but somehow make it all look so damn cool. Consider the members of The Wild Bunch, lowbrow Londoner crooks scurrying under the rock of businessman-gangster Lenny Cole (Tom Wilkinson): There’s One Two (Gerard Butler, from 300) and Mumbles (Idris Elba), two genial hoods hired by dreamy-eyed attorney Stella (Thandie Newton) to steal the millions in cash from white-collar Russian thug Uri (Karel Roden) in transit for Cole’s business contract. Cole waits for his money while Uri sweats over the pinched green, but then Cole’s sweating too, as Uri’s lucky painting, lent to Cole to help smooth their illegal real estate deal, was stolen.

If you couldn’t follow that, it doesn’t get much better. Cole’s estranged junkie stepson Johnny Quid (Toby Kebbell, in a breakthrough role) fakes his death to sell some albums and self-aggrandize, perpetually sucks junk from a pipe, and he probably took the missing painting just to spite step-daddy. Quid’s managers Mickey (Jeremy Piven) and Roman (Chris ‘Ludacris’ Bridges) have an eye out for him, because Cole’s top brass Archie, played by the suddenly and enjoyably everywhere Mark Strong (from Body of Lies and Stardust), has all of Cole’s nefarious resources looking to catch this “RocknRolla.” All of these characters aspire for that rock ‘n’ roll lifestyle, none of them quite attaining, nor willing to unhinge themselves to the same wild, violent reckless extreme of Quid. As Archie, the film’s narrator explains, “We all like a bit of the good life: some the money, some the drugs, other the sex game, the glamour or the fame. But a RocknRolla… Oh, he’s different. Why? Because a real RocknRolla wants the fucking lot.”

While not charged with the visual bravado Ritchie’s previous efforts flaunt, the film looks saturated in the same greasy skillet that cooked up crusty Johnny Quid, with tarnished hues and industrial browns. Flashy breakneck editing and whooshing transitions make the picture lively, whereas some stationary camera moments, such as the oddball dance between One Two and Stella, beat with their own active pulse thanks to actors alone. Like music video direction dipped in acid and scraped down for a hard edge, the result feels like a Guy Ritchie film: Something we haven’t had in years.

Ritchie’s recent and very public divorce explains a lot, I suppose, since his Madonna-era films—the abysmal romance Swept Away (2002) and impossible pseudo-philosophic riddle Revolver (2005)—ruined the filmmaker’s vast potential for greatness after Lock, Stock, and Two Smoking Barrels (1998) and Snatch (2000). But if RocknRolla seems too similar to his two pre-Madonna small-time-crime flicks, consider this a welcomed return to form, even though in terms of style and narrative there’s no sense of interim growth.

Is his lack of evolution problematic? In a way. From the idealistic perspective of auteurship, yes. Though, my disappointment in the progression of Ritchie’s skills is outweighed by my delight in the end product. Maybe Ritchie simply needed to reestablish his footing before moving forward, which, given that his next film is Sherlock Holmes with Robert Downey Jr. and Jude Law and Mark Stong again, looks to be quite the anticipated and impressive advancement. It’s a moot point, really, because when you strip away the surrounding hullabaloo about Ritchie’s career path and the Madonna situation, none of it matters in relation to the effect of the film itself.

If you disagree, then call me a Guy Ritchie apologist if you must. The films of England’s Quentin Tarantino contain the sort of rough-and-tumble comic irony and labyrinthine plotting that keep viewers clamoring for more underworld bliss. RocknRolla may not have the originality of the director’s first two capers, but his winning formula is effectively reaffirmed and ready for future innovation. Welcome back, Mr. Ritchie.