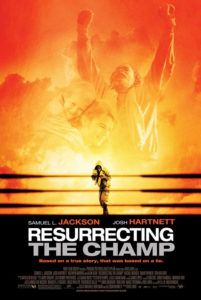 Rather than make a bold indictment of Erik Kernan’s journalistic and ethical waywardness, which ranges anywhere from “exaggerating” for his son’s love to conducting poor research, Rod Lurie’s new film Resurrecting the Champ stands, mop in hand, ready to soak up your tears. Despite its Hollywoodization of Kernan’s story, it is an intriguing one, even if it does play your heartstrings like banjo. Josh Hartnett plays Kernan, a Denver sports writer whose editor Metz (Alan Alda) doesn’t believe in Kernan’s machine-like writing. It lacks personality, he says. Kernan is sent to cover no-name boxing matches, his articles for which are buried. Living under the shadow of his late father, Erik Sr., a famous sports announcer from yesteryear, Erik chases ghosts in both his writing and broken family life—he’s separated from his wife, Joyce (Kathryn Morris), and desperately misses seeing his son Teddy (Dakota Goyo) each day.

Though not Stephen Glass, Kernan is a liar, spinning or embellishing the truth to impress his son and potential employers. He tells his son he’s golfed with Mohammad Ali and claims to another editor Whitley (David Paymer), from The Denver Times, that Metz told him to write in a detached style. Explained as a desperate, if not unconscious attempt to vie for the attention of Teddy, we never judge Kernan for telling such big fish stories, since Hartnett plays him as naïve-faced. One night Kernan finds a bum receiving a beating in an alley by drunken twentysomethings; the bum, he discovers, is ex-boxing champ Robert Satterfield, played to grim perfection by Samuel L. Jackson. Referring to himself as “Champ” and living on the streets, everyone thinks Satterfield is dead. What a story it would be, Kernan thinks, to recount the life of a forgotten champ. Kernan pitches the idea to the competing editor Whitley, under Metz’s nose; Whitley loves it, thinks it’s front-page material. Following a series of heartfelt interviews with Champ, Kernan writes his article, finally achieving the success, and therein the respect from his son, he’d hoped for.

Jackson gives his second profound performance this year; the other one being in the superb Black Snake Moan, where he played a loner blues man who cares for a sex-crazed teen. Jackson hops around in his alley, as if prepping for a title bout that’s never to come. His skin and hair are made up to show age and wear. Reportedly, actual homeless people mistook Jackson for one of their own in between takes; the actor said he enjoyed many a meal at the local homeless shelter. As he ages, I sincerely hope Jackson gets away from his Snakes on a Plane fare and concentrates on his dramatic output. His award-worthy performances this year made me realize how underappreciated the actor really is. There’s a point where Resurrecting the Champ takes a turn, and much like Clint Eastwood’s Million Dollar Baby, another boxing-centered movie, the story changes entirely. To tell you what that turn is would give away too much, but suffice it to say, the narrative alludes to more than a filmic human interest story. I was disappointed that the story, after making such drastic and sudden changes, reverts to its cushy material, finally ending on an overly sentimental note.

Perhaps I’ve been spoiled by writer-director Rod Lurie’s previous, expert cynical work, but Resurrecting the Champ seemed too sweet. With The Contender, Lurie examined the unfortunate truth that a potential woman president will always be seen in terms of her sex, as opposed to her politics, referring to her history with the act because of her status as a female; with Deterrence, he placed the fate of our world in the presidential hands of Kevin Pollack—a ballsy moves as a filmmaker. Lurie’s work here is disappointing and without risk, but succeeds, even if we can see his fingers strumming away on the aforementioned banjo. The film’s best moments take us into boxing history. There’s a scene where Hartnett’s character arranges a phone call between the Champ and Jake La Motta. We are immediately reminded of Raging Bull; Lurie was smart to keep La Motta offscreen, as no actor portraying him could ever match De Niro’s iconic performance.

We’re harked back to dozens of boxing films, which are often the greatest of all sports movies. As Hartnett’s Kernan narrates, boxers’ battles are so profound because a fighter stands alone. We watch as the boxer struggles through his emotional war in the ring, fighting through a symbolic, intrapersonal conflict; his opponent is often circumstantial. Boxers in cinema often face their own worst enemy. From Errol Flynn’s Jim Corbett in Gentleman Jim, to Russell Crowe’s James J. Braddock in Cinderella Man, boxers are our flawed, human heroes. Samuel L. Jackson’s Champ may be the most damaged boxer of them all. And if there’s any reason to recommend Resurrecting the Champ, it’s his character’s addition into the annuls of cinema’s boxing greats.