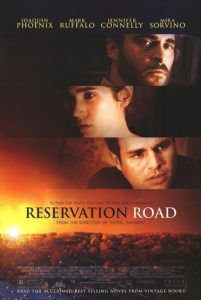 No one ever thinks an unfortunate accident with happen to them. Complacent, we forget that we’re always within an inch of our lives, from some terrible happenstance, because we think What are the chances it will happen to me? And when something does eventually occur, the world remains forever distorted under a dark veil, until we can, by some means, move on. Two tragedies occur within the film Reservation Road, a character-driven drama that occupies elements of both thriller and morality play. One man, Ethan (Joaquin Phoenix), has an ideal family, a wife and two kids, until his son Josh is killed by a car that disappears into the night. The driver, the divorcee Dwight (Mark Ruffalo), speeds away out of fear and panic, rushing his sleeping son Lucas (Eddie Alderson) home to make his restricted custody deadline. After the accident, one man goes home without a child, his family shattered; the other, his family already shattered, simmers between guilt and covering up his crime.

Ruffalo’s character is given a surprising amount of sympathy, since in a roundabout way he feels the potential of Ethan’s loss through the distance between he and his son’s failed bond. Fighting with his ex-wife Ruth (Mira Sorvino) for more than the court-appointed time with his son, Dwight barely shares a relationship with Lucas beyond baseball and takeout. Whether it’s not having his son around, or imagining what losing him would be like, Dwight, himself a small-time lawyer, laments over what he’s done. But he’s also afraid of losing his slowly growing father-son rapport, especially after Lucas asks to move in.

Meanwhile, parents Ethan and Grace (Jennifer Connelly), left with only an all-but-forgotten daughter (Elle Fanning) and memories of their lost child, remain consumed with their son’s death. More so Ethan, who seeks answers by way of revenge—as opposed to closure for his family—finding no solace in the court’s measly maximum sentence for hit-and-run perpetrators: at most, ten years. Since the police are no help in finding the criminal, he gets legal advice. Of course, it’s Dwight’s firm Ethan appoints. But attorney-hired private investigators can do only so much. The damaged father instead turns to the internet, where communities of parents in his situation offer advice—that there is no justice unless it’s your own.

Grace blames herself when police discover a peanut jar near where their son was hit; she told him to release the captured fireflies not long before he was killed. She goes on like a walking sack of remorse, and stays so for the remainder of the movie. “Do you blame me?” she keeps asking Ethan, who blames only the Whoever that drove away. Indeed, all of the characters rely on one-note descriptions. Grace is guilt. Ethan is revenge. Dwight is fear. They’re never more complicated than that…

Stationary for the duration, we anticipate when, if ever, either of these men will act on the feelings they’ve been ruminating over the entire film. They cross each others’ paths through an endless series of coincidences, oblivious to their importance to one another. Ruth teaches Ethan’s daughter piano lessons. Lucas knew Dwight’s son at school. Ethan asks Dwight to find his son’s killer. But rather than offering a grand design to connect these ironies, they’re inserted as devices to create growing suspense. Will guilty Dwight develop gall enough to confess before increasingly broken Ethan buys a handgun and does something brash? Instead of growing to a boiling point and reveling in the spillover—like the similarly-themed In the Bedroom—this film barely heats up before the end credits roll.

Co-scripted by director Terry George (Hotel Rwanda) and John Burnham Schwartz, author of the novel on which this film is based, Reservation Road might make for an involving read in book form, but lacks a cinematic narrative. Viewers require growth and progress within a film, neither of which are offered here, whereas novels can meditate on a subject for chapters without losing the reader. Without a subtext for us to ponder, just a familiar plot and the occasional sparkle of strong acting, the film feels curiously one-dimensional.