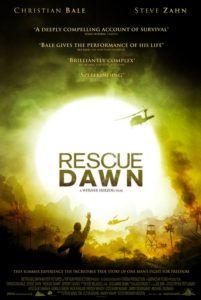 Perhaps it’s blind naivety forcing U.S. Navy pilot Dieter Dengler (Christian Bale) against the wall when, after being on the run for some time following his plane crash over Laos, after his capture, and after being led through a thick jungle to a small secluded village, he smiles at the natives appreciatively. Moments later, he’s forced to the ground and each limb is tied to an individual post, shaping his body into an “X”. A child sits crouched over him, dangling a large beetle above his head with a piece of string. Dieter acts as if he should be treated well, but soon finds himself in a Viet Cong camp with fellow Americans: walking, talking skeletons Duane (Steve Zahn) and Eugene (Jeremy Davies). A dramatization of visionary director Werner Herzog’s same subject explored in his 1997 documentary Little Dieter Needs to Fly, Herzog’s Rescue Dawn avoids reducing Dengler’s perilous journey to a mere thriller. Another filmmaker might have underlined sequences where Dengler plots and eventually escapes capture, sending up the most satisfying moments from The Great Escape or Brute Force. But our attention is always Dengler’s unwavering obsession to escape—the emotion, not the action of it.

This isn’t a Vietnam War movie, since in 1966 the Vietnam War didn’t exist. Herzog is careful to point out that fact, with Dengler sworn to secrecy prior to his mission by his superiors and by the CIA after his return. We learn early on that Dengler, as a child, lived in Germany during WWII and was virtually birthed with the desire to fly when a U.S. pilot, who Dengler believed was trying to kill him, soared by, canopy down, so that their eyes met. With that moment, Dengler knew he wanted to fly. After getting American citizenship, Dengler joined the Navy, and on his first mission flying a single propeller Skyraider plane, he’s shot down by anti-aircraft fire. What an ironic origin for ones dreams, and what an unfortunate result of those dreams.

Filmed in Thailand, Herzog takes us deep into the jungle. Even though the short film on jungle survival Dengler and his friends watch on the carrier was a joke, its limited information becomes useful in an introductory sense. Dengler struggles through thick brush before his capture and after his escape. Vines tangle around his body as he’s barely able to make a path with his machete, bugs attack him, and the lack of food or water wears on him. When he talks of escape to his cellmates, it’s almost like a gag—the jungle is the prison, they tell him. Like the actual physical presence of Thailand’s harsh jungle settings, Herzog gets further authenticity from his performers. By the time Dengler gets to the jungle, he’s been tortured, starved, and challenged by a fellow inmate, “Eugene from Eugene”. The actors reportedly ate worms and allowed leeches to attach to them for the production. And its impact is as exhaustingly real as it should be. Bale’s scenes alone in the jungle are miraculous, in part due to the haunting ethereal score by Klaus Badelt. The music plays more like pops in the mind, meshing with deafening echoes of jungle creatures to form a subtly maddening symphony of ominous sounds.

When Dengler is first captured, he’s hung upside down with an ant nest tied to his face, submerged in a well, and meant to soil himself. The effects wear on him, and Bale is given yet another opportunity to flex his disciplined corporeal muscle. When Bale made The Machinist in 2004, he reduced his weight to a sickly-looking 120 lbs., and after filming, he was hired for Batman Begins, for which he increased his muscle mass and was well over 200 lbs. in a matter of months. Once more, for Rescue Dawn Bale shows an impressive loss of weight, as do all the prisoner-actors. Steve Zahn, who plays Duane, Dengler’s friend and fellow escapee, lost a reported 40 lbs. for the role. Jeremy Davies, an already skinny actor, looks like a transparent sheath pulled tightly over a skeletal frame. Steve Zahn’s performance is shaky, literally, as he quivers from hunger, fear, and exhaustion; it’s the actor’s best work. Jeremy Davies often plays the twitchy, oddball characters in movies like Ravenous and Solaris; here, his role is more severe and pointedly dangerous for Bale’s Dengler, with an insane logic traditional for the actor’s onscreen performances.

Bale doesn’t ham-up his part as a hero (something I think Bale is incapable of); he isn’t a glorified saint. The titles at the end of the film do not speak of Dieter’s commendations and metals received after his rescue, but instead of where his life took him. This is not a pro-soldier story of patriotic resilience. Rather, Bale comes off as a survivor, as “a man” in the most simplistic way. His intense eyes switch like a light from joy to anger, from dread to desperation. With his weight control, affinity for accents, and power over his articulated presence, Bale has become a modern day Robert De Niro. Herzog’s picture is one of his most accessible for both commercial audiences and devotees to his more artistic work. Even if you haven’t seen the director’s Aguirre, Wrath of God or Fitcarraldo, see Rescue Dawn, as it encompasses Herzog’s frequent themes of passion and obsession in distant settings—all with a more mainstream narrative.