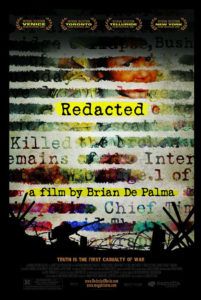 Scouring the lowest depths of the internet, director Brian De Palma (The Untouchables, Mission: Impossible) found video similar to that which he dramatizes in his latest movie, and pulled himself into a world more horrifying than we can imagine. De Palma discovered the true story of a 14-year-old Arab girl raped and murdered by American soldiers serving in Iraq. Redacted makes sure we can imagine it by doing all but showing us the actual footage. The movie is presented as video recordings compiled into a narrative structure, some of it still searchable on the internet, unfolding with every click, and frightening us with its grim truth. We see a French documentary about America’s presence in the Middle East; Arab websites emulating terrorist schemes; anonymous YouTube videos condemning war; Arab reporters giving sincere reports; army base security cameras revealing incriminating conversations; and most significantly, one soldier’s video diary, on which he recorded the rape but did nothing to stop it.

The story follows soldier Angel Salazar (Izzy Diaz), who claims his digital journal will be his ticket into film school. Salazar records the lives of his friends, all of whom wish they were someplace else. Tension mounts after their Master Sergeant dies in a mine explosion, causing Izzy’s comrades Flake (Patrick Carroll) and Rush (Daniel Stewart Sherman) to snap, though we suspect they’ve always been somewhat damaged. They plan to relieve their tension on a young Arab teen, who they see every day at their checkpoint. Despite the objection of friends, who are been threatened to keep silent or die, the men proceed with their plan. Afterward, spooked witness Lawyer McCoy (Rob Devaney) lives with his decision not to act, even though he was an idle spectator.

De Palma’s management of what he shows us remains clever, which is always the case when he controls his productions. Sometimes he goes brilliantly over-the-top (Snake Eyes) and sometimes not enough (The Black Dahlia). Here, he’s achieved an effective balance between truth and fiction, making us wonder which is which. This is a continual theme in his cinema, one that leaves us constantly suspecting the truth, and at the same time realizing there’s no such thing as absolute truth. One of De Palma’s greatest observations was that Godard was wrong, “The camera lies all the time; lies 24 times-per-second.”

At the end of Redacted, De Palma shows us images of “actual” victims. Whether or not they are indeed “actual” remains suspect… That would be the point. We’re given horrible images of mostly children, blown apart by the Iraqi conflict, their flesh charred or gaping wide from the ongoing violence. Wherever the origins of the photographs, real or not, they point out a basic truth of war: innocents die. And so why fight? The narrative works as metaphor, asking how we can remain idle when we know such horrors take place? De Palma’s response might be that soldiers fight because they’re following orders, given a manipulated motivation by their superiors, contrived and “redacted” to convince them to keep fighting. The final images of children torn apart by violence have the eyes and sometimes mouths blotched out with black marker. Anonymous faces are kept from us for legal reasons but, as De Palma infers, they’re also concealed to prove a point: we would never see them anyway. It’s not something the nightly news shows to Americans.

Certainly stories such as this are kept from the public, and if reported, they are soon after forgotten or filtered out by the media to prevent approval ratings from dropping. Morale becomes superior to morality. Anything that could be read as not supporting our troops becomes blasphemous. I foresee many audience members reading Redacted as such, but seeing it as somehow anti-American is reading it incorrectly. Indeed, De Palma presents a sobering anti-war statement. But the indictment is against war as a method of problem solving, against pointing a gun into the faces of those you wish to keep peaceful. Since much of De Palma’s film is based in fact, we must examine what war does to a person.

In one the movie’s YouTube segments, a young girl rants against war movies, describing how we always see the shell-shocked soldier unleashing on innocents, but there’s never a movie about the innocents. Think of any Vietnam movie you’ve ever seen, and you’ll realize she’s right. Is it because Hollywood refuses to depict American soldiers as the enemy? Anti-war pictures like Platoon and Apocalypse Now have those scenes because, as the idiom goes, “war is hell.” It turns people into monsters. There’s legitimacy in such scenes, as De Palma himself showed in his 1989 Vietnam film Casualties of War, an incredibly affecting, though more dramatized, true story about four American soldiers who raped a villager for several days and then killed her.

We’re detached from Redacted in a dramatic sense, partly due to its formal structure, partly from its amateurish acting, given by intentionally unrecognizable actors. But that’s counteracted by a level of authenticity, one likely unachievable from more experienced or “name” performers. De Palma’s intent was not to simply pull us into a compelling drama; for that, see Casualties of War. Instead, he breaches a gap for those of us still afraid to log-on and watch videos of prisoners’ beheadings or Saddam’s hanging. As we’re a society wholly reliant on movies and television to provide catharsis, if not a detachment from reality vs. Hollywood violence, Redacted forces us to watch that horrible reality we’re otherwise too afraid to seek out ourselves, only without showing us “reality” per se.