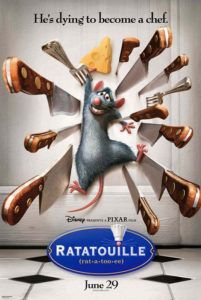 If I told you one of 2007’s best films was about an aspiring chef, who just-so-happened to be a rat playing puppeteer to a gangly human, you might raise an eyebrow. “A rat,” you’d say? “Cooking?” And then of course I’d explain that this is Pixar’s latest treat, at which point you would jump for joy, cheering with glee that Pixar’s new film has finally hit theaters. Ratatouille (pronounced “rat-a-too-ee”, which is phonetically spelled-out on the movie poster for children moviegoers old enough to read, but unaware that the French language drops double-Ls) is prefaced by a Pixar short, a much-anticipated tradition for fans of the animation company. Entitled Lifted, it’s written and directed by Gary Rydstrom, and briefly, but in that unique Pixar humor, examines a UFO abductor-in-training. After Lifted, we realize that Pixar concentrates on visual storytelling more so than Disney, Dreamworks, or any other animation studio. Lifted, and other Pixar shorts, generally tell their stories without benefit of words. It’s no coincidence that the best parts of Ratatouille are brilliant meshes of beautiful, edible, three-dimensional animation.

Comedian Patton Oswalt voices Remy, a would-be chef but for his rodent handicap. Rats aren’t welcome in kitchens (go figure), but an old lady on the French countryside falls asleep most afternoons with her television on, giving free reign to her kitchen. Remy watches Chef Gusteau’s cooking show, learning the ins and outs of Parisian cooking. His keen rat sense of smell and taste allow sensory input to provide the best recipes this side of Wolfgang Puck. When forced from his countryside abode, he’s separated from his family and faced with his dream: cooking at the recently departed Gusteau’s restaurant. Remy finds himself caught between the two worlds of garbage eating with his family or cooking as top chef in Paris. Hmmm, that’s a toughy…

Now run by Skinner (Ian Holm), an order-barking dictator chef, Gusteau’s restaurant offers an impressive amount of real-life recipes, inciting hunger pains in viewers (best to eat somewhere luxurious prior to seeing this film). Depicted with beautiful Pixar animation, food glistens with mouth-watering tangibility, leaving me wishing I had more than popcorn to munch on in the theater. Another wannabe chef (this one human) named Linguini (voiced by Pixar regular Lou Romano) is hired as Gusteau’s garbage boy. By happenchance, Linguini finds Remy adding ingredients to soup; after the soup is found to be a success, the two communicate in the most realistic human-rodent conversation I’ve ever seen put to film, and find that Remy’s talent in the kitchen can be acted out by the naïve Linguini. Remy sits atop Linguini’s head under his chef hat, using Linguini’s hair like marionette strings, pulling his lanky arms and legs about like a real-life Pinocchio. Meanwhile, Skinner suspects some kind of rat conspiracy, which leads to more than one rousing, marvelously conceived chase sequence from Remy’s point of view.

Brad Bird, writer and director of one of Pixar’s greatest achievements The Incredibles, brings his mature sense of storytelling to Ratatouille. A director trait first seen in the underseen 1999 picture The Iron Giant (a movie that always brings a tear to my eye), Bird treats his audiences like adults, though his films are traditionally advertised to young children. He elevates his work beyond traditional kids’ movies, putting pure emotion on screen. He also goes out of his way to show us something we’ve never seen before, or at least represents his stories in a way that is so amazing, only animation could aptly convey it.

The film may be rated G, but I assure you, Bird’s adult audience won’t feel the least bit ousted by the material. For every talking rodent with the potential of cheapening his script to run-of-the-mill Disney-esque cartoons, Bird infuses clever ironies and jokes that will leave the kiddies wondering why mom and dad are laughing. But it never goes past innocent humor combined with skilled storytelling. And what a joy it is to see a great animated feature with a G rating. Ratatouille delivers like no other family film this year; it’s an awe-inspiring experience filled with laughs and tears and adventure, now customary for Pixar’s animation team. For the last few years, Disney’s standard has become a PG rating; not since The Lion King, Aladdin, and Beauty and the Beast has there been such a perfectly tuned cartoon with such universal appeal.