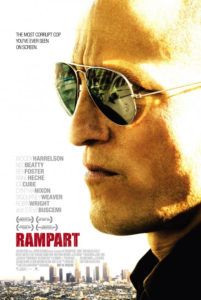 Dirty cop movies are synonymous with great performances. They are usually character studies in which the lead actor explores their morally corrupt role, and therein finds some humanity (or complete absence thereof) amid the distortion of ethics. Consider Harvey Keitel in Bad Lieutenant or Nicolas Cage in that film’s pseudo-reboot, Port of Call New Orleans—both extreme examples, but both feature outstanding portrayals. The list goes on with Denzel Washington in Training Day, Matt Damon in The Departed, and Christian Bale in Harsh Times. The best of these, L.A. Confidential, was penned by James Ellroy, a master of crime fiction whose specialty involves complex stories about the Los Angeles Police Department. Have you seen Cop with James Woods or Dark Blue with Kurt Russell? Those are his too. In Rampart, Ellroy explores the mood surrounding the late 1990s Rampart scandal where the LAPD’s anti-gang unit was implicated in countless offenses ranging from evidence tampering to bank robbery.

Rather than a grand scale story of the entire unit’s misconduct, however, the film follows Dave Brown, a Vietnam vet-turned-L.A. police officer played by Woody Harrelson, in perhaps the best performance of his career. Through Brown, we come to recognize a mind-set of unchecked authority that prevails in all dirty cop movies, suggesting that because of their status, they can operate outside the law. The very notion of law, in fact, no longer applies to these men. It’s more that what Brown says goes. As such, he says and does what he wants to whomever he wants. When his seamy behavior backs him into a corner, his willingness to lie and cheat his way out is only a matter of playing the correct angle. And Brown knows all the angles. Worse, he is filled with hatred and violence of unknown origins. There is no seed for his behavior; no easy explanation. Simply, he is a very bad man.

In particular, Brown is a manifest racist and sexist, but then he claims to hate everyone equally. He doesn’t take out his aggressions on family—his ex-wives (Anne Heche and Cynthia Nixon) who are also sisters, nor his two daughters—although they’re victimized just as a result of knowing this man. When he’s caught perpetuating a Rodney King-style beating, which is of course captured on camera, his families have had enough and want him to leave. His superiors have had enough too, even if his fellow officers applaud his excessive force. Brown has become a relic, possibly a scapegoat to distract the media from the Rampart scandal. His justified paranoia further fuels his downward spiral, as some old friends seem to be conspiring against him and new friends become suspect. The department’s lawyer (Sigourney Weaver) and resident Internal Affairs investigator (Ice Cube) have lots of questions, all of which Brown has slippery answers for. The way he negotiates the many official inquiries into his behavior is both eloquently spoken and wrought with stubborn resolve. With his best interests in mind, everyone encourages him to retire, but he believes he was meant to commit ruthless acts toward criminals on behalf of the people. And who else except him could do it so well?

Loaded with jump-cuts, co-writer and director Oren Moverman’s presentation takes a back seat to the performances. Steve Buscemi appears briefly as the district attorney; Ned Beatty plays Brown’s mentor who has grown tired of his pupil’s inability to change; Robin Wright is one of Brown’s sexual conquests and a constant source of mistrust; Ben Foster cameos as a bum and witness to murder. But this is Harrelson’s show. Moverman’s camera designates the film’s indie origins by examining its star’s visage in ultra close-ups, as Brown drives about L.A.’s streets hunting for someone to shake down and exploit. Having worked under Moverman in 2009’s The Messenger, for which he received an Oscar nomination, Harrelson appears rail-thin and mean as hell here, alternating between delusions of grandeur, calculated hostility, and eventually self-destruction and regret. His performance is so convincing that he almost—almost—elicits our sympathies. Instead, he becomes a fascinating study of the LAPD’s collectively old-fashioned, head-crackin’, bigoted methodology.

Where Rampart fails is providing any kind of satisfying resolutions for the multiple story strains that are so effectively interwoven throughout the film. Here’s one of those indie movies that fades to the end credits unexpectedly and leaves the viewer wanting more in the worst possible way. The film resolves to recreate the atmosphere of a particular time and place, namely the Rampart scandal setting, and in its execution regrettably leaves its anti-heroic protagonist twisting in the wind. Perhaps history is meant to fill in the blanks for us, or perhaps cops like Officer Dave Brown have no satisfying conclusions in their lives. Whatever the case may be, Ellroy and Moverman’s symbolic representation of Brown-as-LAPD transforms the film into one outshined by its own central performance. To watch the film is to savor Harrelson’s incredible performance, but not much else. But then, that’s reason enough.