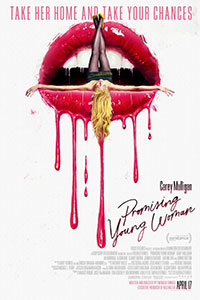 An early scene in Promising Young Woman finds Cassie, played by Carey Mulligan, faking drunkenness inside a yuppie businessman’s apartment. Thinking she’s barely coherent, he has lured her back to his bedroom, where she mumbles, “What are you doing?” He reassures her, “You’re safe”—even as he slips off her underwear. Then her sober voice asks the same question, “What are you doing?” as if to say, “Gotcha.” Every week, Cassie does some variation of this routine. She feigns intoxication at a nightspot, waits for some so-called nice guy, who doesn’t even know her name, to offer her a ride home. And when he inevitably tries to rape her, she turns the tables on him. She keeps the name of each perpetrator in her notebook, and there several pages of names. It’s a scheme designed to avenge her late best friend, the unseen Nina, who dropped out of medical school after a student raped her as others watched and laughed. Cassie, angry and grieving for her friend, has spent years confirming her worst beliefs about men while teaching them lessons in predatory behavior.  The film, written and directed by Emerald Fennell, offers a germane look at #MeToo movement issues through a … Continue reading Promising Young Woman

Copy and paste this URL into your WordPress site to embed

Copy and paste this code into your site to embed