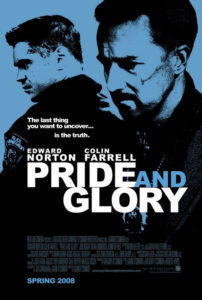 Good cops and bad cops bark the same lines in movies. They assert “I’m a cop!” either to declare their honorable status as protectors of the law, or to justify when they’ve done something horrible. Pride and Glory features both uses of the line, uttered amid a flood of familiar cop movie clichés poured out onto the audience: Two brothers on opposite sides of the law, corruption in the precinct, seemingly routine crimes leading to conspiracy, and a fistfight to solve it all. We’ve driven down this road before.

Take Ed Norton’s character Ray Tierney, one of those train-wreck movie cops who lives on a boat at the docks where he broods. Part of a clan of Irish cops, he’s the intelligent brother with a conscience. The Tierneys are headed by Francis (Jon Voight), a proud father who drinks too much and says too much when he drinks. Francis Jr. (Noah Emmerich) unwittingly serves as Captain over reckless officers fed up with their disproportionate compensation for their effort, among them is the Tierney’s brother-in-law Jimmy Egan (Colin Farrell).

We learn right off the bat that Jimmy’s crew planned to rob drug dealers as hired guns for yet another drug dealer, but something went wrong and four cops ended up dead. Everyone starts reminding each other “Those were cops out there!” and suddenly Ray is on a task force to find the killers. Sure enough his investigation leads him to trouble at home, and I don’t mean the usual down-talking to wives by their cop husbands, although that’s present too (“You got no idea what it takes to do what we do!” seems to find its way into every argument). Instead, Ray must mull over whether or not take Jimmy down and sacrifice the honor of his family, or lie and therein surrender his ethics.

Much of this material was covered last year in the Joaquin Phoenix-Mark Wahlberg vehicle We Own the Night, which, though it wallowed in formulaic storytelling, had sense enough to thrill us with proficient cop action. Pride and Glory takes itself as seriously as can be, and rarely manages to entertain on diversionary or dramatic terms. Weighted by a heavy gravitas, the film’s blue saturation makes for a moody viewing experience, overly melodramatic and carting the bad taste of a television cop drama rerun.

Subplots arise and disappear without consequence, making the end result feel overlong. Francis Jr.’s wife (Jennifer Ehle) receives chemotherapy and exists in the script solely to elicit sympathy for her husband, as do Jimmy’s wife Megan (Lake Bell) and their children. A reporter tries to uncover the truth and help Ray absolve himself. Ray makes periodic visits to his estranged future-ex-wife for sympathy. None of these understories resolve themselves and seem artificial upon reflection.

Fortunately, top brass like Norton and Farrell cut through the annoyingly inauthentic cop yarn with their fine performances. Norton gets by on presence and prestige alone, but doesn’t stretch himself beyond an intense glare or two. Farrell continues his post-wild child rise to greatness by playing another role rooted by inner turmoil. This is the third such role for Farrell in 2008, the wonderful In Bruges and Cassandra’s Dream being the other two. Voight does serviceable work as the drunken father, giving slurred speeches and stomping on tables. And Emmerich is overshadowed by his costars.

Joe Carnahan (Narc) and director Gavin O’Connor receive screenplay credit for a film offensively standard. Shot without much technical flair and directed without rousing passion, Pride and Glory is average to a fault. From the first scenes we know how it will end. Everything in-between delays the inevitable and expected outcome, and doesn’t bother involving us on any emotional or escapist level. Though functional, it’s just not very special, and fails to chime any of those grand notes it’s reaching for.