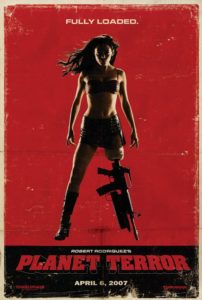 NOTE: Poor advertising for the stylish Quentin Tarantino-Robert Rodriguez’s double-feature Grindhouse resulted in a box office bomb, thanks to The Weinstein Company’s lazy, confused marketing strategy. Despite raving critical reviews, the unique theater experience will remain exclusively that until who-knows-when. The Weinsteins have split the two films, banking on high DVD sales, in hopes to recoup some of their losses. Death Proof is available to own as of September 18th and Rodriguez’s Planet Terror on October 16th. And though I touched on each feature back in April in my Grindhouse review, since each film received the “extended edition” treatment for DVD, and each is its own, whole film, I thought they deemed individual reviews.

Though not superior to its formerly conjoined Grindhouse twin Death Proof, Robert Rodriguez’s Planet Terror does conform to the conceptual ideal of grindhouse revival. It’s a splatterfest of incomparable grotesqueness, centering on, even exaggerating the gore, sexuality, and humor inherent in 1960s and 1970s dive cinema. Rodriquez meshes his two filmic personalities, the artist (as seen in Sin City) and the exploitative thrillseeker (From Dusk Till Dawn, Desperado), making for an oddly satisfying experience.

This disc begins as the theatrical version did, with Rodriguez’s ersatz trailer for Machete, a would-be action picture about a Mexican day laborer/assassin-for-hire (Danny Trejo). With cheesy movie trailer lingo announcing “Action” and “Emotion” like they’re newly featured attributes to motion pictures, plenty of insane stunts, and absurd dialogue, it’s no wonder Rodriguez has been toying with the idea of expanding this into its own Grindhouse-type release. He says it would only take a week or so to shoot the necessary footage. I say give him the money, Weinsteins.

And then, after a mixture of vintage theater announcements, Planet Terror begins with the appropriately camp Rose McGowan, as Cherry Darling, dancing her go-go boogie. The aspiring stand-up comedian couldn’t have been played by anyone else; it’s a role not even the best actress could accomplish. McGowan hits it right on because she is so hammy and unnatural (see Phantoms, you’ll see what I mean). But that’s Cherry Darling. She meets up with ex-boyfriend El Wray (Freddy Rodriguez), a mysterious ex-somethingorother who carries a night-vision rifle and handles knives like a baton twirler.

There’s a suggested social commentary, which I won’t bother arguing here, since it’s not fully described in the movie. Planet Terror isn’t smart enough to reflect anything but bullets and blood; but, I suppose, that’s the point. Bruce Willis plays a disgruntled military man leading a group of chemical weapons-poisoned soldiers hell-bent on survival. Being poisoned, they’re required to inhale a toxic gas to survive or they’ll become slimy, decaying sickos (Rodriquez’s version of zombies). Then again, if those people not infected are exposed, they suffer the same fate. Trouble arises when the rogue scientist and inventor of the toxic gas (Naveen Andrews) accidentally releases it on a small, unsuspecting Texas town. Sicko hell breaks out, recalling zombie terror, only gooier and grosser in every sense.

Heading over to the local hospital, husband Dr. Block (Josh Brolin) and his wife Nurse Dakota Block (Marley Shelton) begin to see the first signs of a sicko outbreak. They have their own marital faithlessness troubles; Dr. Block discovers his wife’s lesbian lover dead from a “car accident” and realizes her infidelity. He plans to kill her for it, but not before the sickos overrun everything, bringing with them endless carnage. We see gunshot wounds that spray out and seem to gush gallons of oozing blood, boils squeezed until they burst, a sicko victim whose brain was eaten referred to as a “no-brainer”, Naveen Andrew’s mad scientist obsess over testicles, Cherry Darling’s leg removed and replaced with a gun, a child shoot himself in the face, Quentin Tarantino’s sicko genitalia schlup off, and more. But it’s all in good fun.

Despite internet rumors, the “missing reel” from the theatrical version is not replaced for this “Extended Edition” DVD. Frankly, the film is more interesting without it. We are given around 10-minutes of new footage, mostly elongated conversations drizzled here and there. It’s certainly nothing substantial as with the Death Proof home video release. The new DVD of Planet Terror is problematic. Watching a movie with film stock burns and imperfections on a plasma television seems awkward, despite being entertaining, so home video viewings are less than ideal. Grindhouse and its children, specifically Rodriguez’s movie, were meant for theatrical viewing. But what’s the solution? Should Rodriguez have cleaned away the audio pops and intentional blemishes as Tarantino did for his wide, solo Death Proof release shown at Cannes? That would sacrifice much of the film’s deliberate abuse of the cinematic apparatus, as well as the blatancy of the campy plot. For Death Proof, a film less grounded in shoddy production, its separation from the Grindhouse double-feature worked. For Planet Terror, we feel strangely out of place watching in our comfy abode. Ignore these inconsistencies, however, and Planet Terror stands up as a juicy, gritty, funny piece of horror.