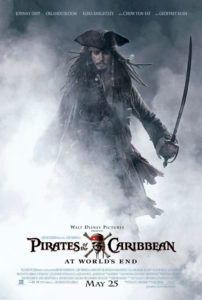 It’s hard to deal with disappointment when harboring such high expectations. After seeing Pirates of the Caribbean: At World’s End, I feel sorely let down—even robbed of something owed to me: a worthy end to a thus-far entertaining franchise. On a major studio project such as this, who is to blame for inconsistency or lazy screenwriting? At first, you want to accuse the writers. But charged to write a major blockbuster without ample time to do it (it’s rumored that Ted Elliot and Terry Rossio cranked out the scripts for both Dead Man’s Chest and At World’s End in a couple months), the screenwriters probably just got tired toward the end. Who can fault them for that? An impatient studio and producers could also be to blame for to get out two more Pirates after the first, distributing before audiences forget part two, while overlooking the fact that audiences have home video to remind them. Heck, if we could wait a couple years between Star Wars movies, we could wait that for the final Pirates flick. Point being that Pirates 3 was a major disappointment for me, party because it felt rushed, partly because it lacked the obscene, non-stop action of the first two.

At World’s End begins with Will Turner, Elizabeth Swan, and the now reanimated Captain Barbossa in Singapore, attempting to charter (or steal) a ship and a special map from the pirate captain Sao Feng (Chow Yun-Fat). The map will lead them to places where maps are useless, off the edge of the world to Davy Jones’ Locker. Lord Beckett has gained control of the world’s seas by using Davy Jones and the fishily supernatural crew of The Flying Dutchman as puppets. At the end of Dead Man’s Chest, Norrington brought Beckett the heart of Davy Jones, which is now used as a blackmailing device to keep Jones in check. The octopus-faced sea captain is reduced to a helpless role throughout the first two hours of the picture, grudgingly operating for Beckett, which removes all that made him a mystical presence onscreen in the second Pirates movie. Beckett intends to wipe out all pirates to accomplish his task (why he hates pirates so, we don’t really understand).

The planned counterattack is to bring together the nine pirate captains from an ancient charter and decide what to do. The recently damned Jack Sparrow is one of the nine, as is Barbossa. After being rescued from Davy Jones’ Locker, Jack needs convincing or he’ll follow his instincts and run. Meanwhile, everyone has their own agendas. Double-cross becomes the film’s primary plot device early on. Will Turner will do anything to get back onto The Flying Dutchman to save his father. Elizabeth Swan, now a full-fledged pirate, wants to go to war with Beckett. Barbossa wants the Black Pearl to himself, as does Jack. Too afraid of death to fight with the others, Jack will make a deal with Beckett if it means not going back to Jones’ Locker again. Sparrow needs to get a hold of Jones’ heart and stab it, as The Flying Dutchman needs a captain—whoever stabs the captain’s heart will take his place and become immortal, then obligated to carry the souls of dead sailors onto the next world.

These varied intentions make two-thirds of At World’s End mostly about people standing around and explaining their double-crossing intentions. Other movie critics are claiming that this film is overly complicated, though it is not. The plot is simplistic enough for your child to understand, even with all the twists and turns. On the other hand, it’s not sufficiently diverting to keep the kid entertained. It’s my guess that those critics were simply frustrated with where the film was going, or not going rather, and shut off their brains. With little action, we’re forced to acknowledge the ongoing absurdity of the plot, which was also present in the first two films but nicely disguised by swashbuckling swordplay and big-budget special effects. Where were the battles in this film? The clang of swords? The clever jibes between thrusts? Where were the constant, almost-useless-in-a-good-way action and adventure? They were replaced by discussions of “Pirate Code” and the incongruous idea that pirates are virtually an organized government that deals with the same bureaucracies as Beckett and his evil seafaring empire.

Soon, the viewer realizes that plot points are being wrapped up offscreen and new ones are randomly introduced. The writers dispose of the Kraken from Dead Man’s Chest early on by simply pressing ‘Delete’—preventing any chance for grandiose sea monster attacks. Throughout the film, Barbossa suggests that to defeat Beckett, the pirates must “release” the sea goddess Calypso from her human form. Is it Elizabeth? Is it Tia Dalma? Is it the monkey? We’re told of Calypso’s power all through the picture, but when she’s released, it’s kind of a big joke. And after seeing the final battle set around an immense dark whirlpool, which admittedly doesn’t disappoint, I realized it was the only memorable battle in a nearly three-hour adventure film.

Johnny Depp and Geoffrey Rush collectively hold this picture together, if at all. Depp continues his excellent run as Jack Sparrow, showing us an even more surreal side to the character while stuck in Davy Jones’ Locker and commanding his own ship. Barbossa is the film’s true pirate, however. Rush’s performance remains craggily and gristle-voiced, savage and uncompromising, always with a layer of grime on his skin and film on his teeth—and somehow always likable. Keira Knightley enters familiar King Arthur territory by becoming a female warrior, standing and shouting commands to her crew; except just as in that film, she doesn’t have the presence another actress might to pull it off. Orlando Bloom sits this film mostly on the sidelines as an unpredictable element that’s used when needed. The audience never knows what he’s capable of, doing anything to get his father back. Romantic tension between the two is curious, as we knew from the first scenes in the first movie their love was eternal, so why bother suggesting that they’re not going to end up together?

And what a tragically misplaced use of Davy Jones. As lapdog to Beckett, a ghostly presence is removed of his power. It’s just shy of laughable that such a twerp like Beckett could reduce all the powers of the sea to a frustrated growl from Jones. We didn’t learn much about Beckett in Dead Man’s Chest or of his motivations beyond wanting control of the sea. Beckett maintains his smug, aristocratic evil throughout, even though he’s faceless—the only character in the series we don’t really know. Being that he’s the primary villain, the character seems empty. Oh, and one or two parrot/monkey/goat gags could have been edited out and replaced with characterization.

I won’t say what happens in the end exactly, but each character ostensibly falls back into the stations where they began in The Curse of the Black Pearl. As a result, all three films are superficially pointless with the way this film is closed (but like any responsible Hollywood blockbuster, it makes room for future sequels). Speaking of which, those rumors of a fourth installment in the series—let’s hope they stay rumors. This film ends where it should, with a bookend enclosing plot lines the franchise began in 2003. (Just walk away Mr. Bruckheimer, just walk away…)

With little of the onscreen magic that was so prevalent in the first two, it’s hard to feel contented with how At World’s End wraps up this trilogy. Perhaps I was expecting too much consistency, hoping for the same level of adventure that reached its peak in Dead Man’s Chest. But as you’re watching the third or fourth lengthy debate about “Pirate Code” and what should happen in the upcoming hour of the movie, you too will be wishing the film just stuck to basics: swashbuckling and mindless action. When a film like this tries be something other than its fundamental self, it’s painfully obvious. It just keeps going and going because it has the budget to do so, carting in sacks of gold doubloons as we sit scratching our heads at why nothing is happening. And there was so much potential for the perfect ending…