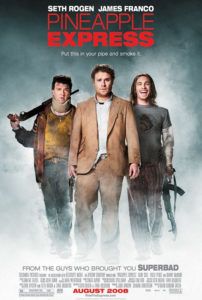 Its title derived from a strain of marijuana so rare the equivalent of smoking it is “killing a unicorn,” Pineapple Express isn’t just another stoner comedy. It is, of course, but then again it isn’t. How can it be, when the filmmakers have infused the otherwise lowbrow material with an impressive sense of craftsmanship? The result is unexpected to be sure, albeit a welcomed and relentlessly funny experience. In the 1990s, independent writer-director Richard Linklater made a number of pictures that helped usher-in a mild indie film renaissance, beginning with 1991’s Slacker. Amid inventive undertakings like Before Sunrise and A Scanner Darkly, Linklater applied his talents for natural dialogue and liquid camera movements to the broad, lovable drug-humored Dazed and Confused. David Gordon Green, maker of soulful and temperate 2000-era dramas like Snow Angels and Undertow has done the same thing with the Pineapple Express, only on a grander scale.

Green brought along his chief production crew from past films, namely cinematographer Tim Orr and occasional familiar faces like actor Danny McBride, exposing them to a genre far removed from the director’s usual fare. Green’s standard ventures are modern-day equivalents to the subtle poetry of Terrence Malick’s Badlands and Days of Heaven, only set more exclusively in his own backyard (North Carolina). Films like All the Real Girls and George Washington help describe his meanderings, wherein we’re exposed to characters created by their environments and conflicted by their emotions. Supplement such careful artistry with heavy pot smoking, befuddled discussions of the utterly pointless, and thrillingly fast-paced action sequences, and you have something unique.

Seth Rogen plays Dale, a process server who witnesses a murder while on the job. He runs to the first place he can think of: the crusty apartment of his drug dealer Saul, played by James Franco. Dale realizes the killers can connect him to Saul and will probably come looking for him, so together they go, on the run from a seedy killer named Tom (Gary Cole), a crooked female cop (Rosie Perez), and two eccentric hitmen (Craig Robinson and Kevin Corrigan). Nevermind that they’re being hunted by ruthless villains, our heroes calm themselves with the aforementioned super-weed, which sends them into exchanging bouts of paranoia and lethargy. One moment they’re playing Leap-Frog in a woodland hideout, the next they’re engaged in bloody fisticuffs with a stool pigeon (and calling for the occasional “Time-Out”). With them through it all is their illegal friend—smoked, sold for cash, or used as a clue. Though it’s pure fantasy, not pot, keeping them alive in the midst of gunfire and hysterically over-the-top fight scenes like something out of John Carpenter’s They Live.

Pineapple Express doesn’t overtly promote the use of marijuana; then again, few scenes feature characters not using the drug. The film makes a case to legalize it, backing that argument with unbecoming behavior, which in turn suggests the message is anti-pot. To get a clear view, you have to consider the source. Rogen scripted the story with co-writer Evan Goldberg (the two wrote Superbad together), and both are vocal about their frequent partaking. Their writing, primarily the dialogue, contains an unlikely element of realism, further perpetuated by the flawlessly casual acting of its two leading men. Despite playing essentially the same jolly goofball in a number of roles for the last couple years, Rogen remains likable and sympathetic, even if he’s is a chauvinist loser. You’ll be most surprised by Franco, whose turns in In the Valley of Elah and the Spider-Man movies certainly didn’t foresee his pitch-perfect comic precision as Dale’s loopy dealer. The two make quite a pair, suggesting those buddy comedy movies from the 1980s haven’t outlived their usefulness.

What you have might be reminiscent of Hot Fuzz—a film where you laugh throughout and occasionally cling to the armrest, involved in a chase scene or elaborate shootout. Producer Judd Apatow continues his string of A-Grade comedies (after The 40-Year-Old Virgin, Knocked Up, and Forgetting Sarah Marshall) with perhaps the best one yet, largely due to the expert handling by its director. Whether or not Green has officially gone mainstream for the Apatow clan remains to be seen. Perhaps he’s tired of ramen noodles and bargain shopping—the spoils of independent filmmaking. Maybe he finally decided he’d like a paycheck. He deserves one.