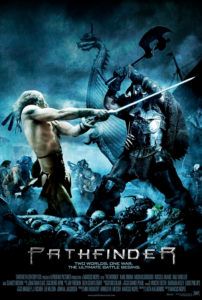 Swordplay-driven historical or sorcery epics, all the jazz a few years back before The Lord of the Rings series released its final installment Return of the King, have petered out with poor attempts to establish new franchises. Eragon, King Arthur, and now Pathfinder represent desperate-but-failed undertakings, eager to capture audiences with the same sense of adventure Frodo and Aragon brought us. While Pathfinder may not be the worst of these D-grade would-be epics (that honor goes to Eragon), its crack at splendor feels labored to the point of being pathetic, making it one of the most mediocre movie experiences of 2007.

The story begins when a Viking ship lands on the shores of what is now America “600 years before Columbus landed.” While slaughtering Native Americans, one of the Vikings demands that his roughly ten-year-old son slice up a Native baby; the boy refuses and finds himself abandoned there by his people to die. A Native woman later finds the Viking boy and adopts him. As he grows, he learns that he’s neither considered wholly Native nor altogether Viking. Destined to be an outsider and now a full grown man, “Ghost” as the Natives call him (played by Karl Urban; better known as Eomer from The Lord of the Rings movies) avoids capture when the Vikings return. Ghost, with Viking origins, fights back and kills the Viking threat with the militaristic know-how of a Viking and all the stereotypical stealth of a Native. That about sums up the last hour and thirty minutes of the picture.

Vikings speak their native language, read via subtitles—their foreign-thus-dangerous persona solidified by their gristly, unfamiliar speech. Called “dragon people” by the Natives because of their metallic armor, colossal size, and elaborate weaponry, the Vikings are depicted as killing machines, slaughtering entire villages. But rather than take a leap in suggesting audiences would appreciate authenticity, as Mel Gibson did with his similarly-themed Apocalypto in the Mayan language, Natives speak English, which is problematic to say the least. Films with respect for Native cultures often film them speaking their original tongue. Given that Pathfinder seeks less attentive audiences than Dances with Wolves might, it’s no surprise Natives speak English. But there’s something inherently wrong with depicting English-speaking Natives when the English haven’t arrived yet—as though it was always meant to be that their culture would be assimilated by the English-speaking world. What’s more, the Natives, though fighting off whites, are saved by a white hero. The “savages” just can’t win…

With a total of four or five lines worth of dialogue, Ghost is just that—his character is transparent, barely ever “there” for audiences to affix to. Urban’s face has the same emotionless expression throughout the picture, which makes the character robotic. Shot with a heavy blue palette, director Marcus Nispel (helmer of the 2003 remake of The Texas Chainsaw Massacre) at times gives Pathfinder an interesting look derivative of early scenes from Ridley Scott’s exemplary Kingdom of Heaven. But any potential praise I might have given the film’s appearance was squandered in the final fifteen minutes of the movie, when Nispel uses a staggering amount of bad CGI to create snowfall, blatant cuts to stock footage of avalanches, and then ends the film with painfully bad narration.

Based on a graphic novel, there’s no doubt this film was hoping to piggyback off of 300’s success (also a swordplay epic based on a graphic novel). Originally scheduled for release last summer, several delays (which usually marks bad signs from a troubled production) caused Pathfinder to shift release date over and over. With 300’s massive box office success, producers saw a prime opportunity to resell the same kind of story to audiences: a picture almost solely about violence and unhealthy social undercurrents. 300 harbors sexism and pro-war fever; Pathfinder contains ignorance to Native American concerns. If somewhere out there a moviegoer searches for a characterless story and run-of-the-mill action sequences, the kinds already depicted in better films with genuine characters, this film will suit him or her nicely. For the rest of us, stay home and watch Gladiator or The Lord of the Rings.