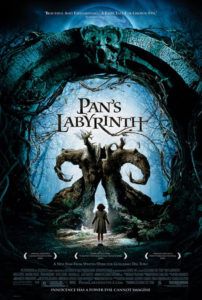 The Spanish Civil War is considered one of the bloodiest and most atrocity-driven wars in historyI. The war’s rampant dread, supplied by firing squads, civilian executions, and widespread fear, cut wounds that remained open on both on the land and in the hearts of the people. This scar, which still affects Spain today, has allowed filmmaker Guillermo Del Toro to set, for the second time, a film with equally dramatic and fantastical elements in the period of countrywide disillusion. Akin to his own 2001 film The Devil’s Backbone, with Pan’s Labyrinth Del Toro combines postwar struggles with elements of fantasy, making it one of 2006’s most impressive pictures.

Critics describe Pan’s Labyrinth as a fairy tale, but I’d argue the film has more impact as a wartime drama. Only a small portion of the story actually deals with fantasy, and I found that by going into the film expecting an Alice in Wonderland-esque plot, I was, only for a moment, disappointed by lack of concentration on the fantastical elements in the film. That moment faded fast, when I realized that, like the director’s wonderful The Devil’s Backbone, the dreamlike elements of the plot complement a greater wartime tale.

Del Toro tells the story of a young adolescent, Ofelia (Ivana Baquero), who when the film begins arrives at a small Fascist-run fort in the woods, lead by her very pregnant mother’s new husband, the malevolent Capitán Vidal (Sergi López, in a performance on par with Ralph Fiennes’ Amon Goeth from Schindler’s List). Ofelia reads fairy tales, makes up stories, and pleasantly, when she arrives at the fort, finds, located nearby, a labyrinth made of crumbling stone to entice her imagination.

Ofelia’s mother, Carmen, wants her daughter to call Capitán Vidal “father,” but Ofelia refuses; her biological father died when the war began. We quickly discover that Vidal doesn’t care much for Ofelia or the pregnant Carmen—just his child in Carmen’s womb. But Carmen is very ill; both the lives of the child and mother are at risk, which scares Ofelia. The first night at the fort Ofelia is visited by a fairy; it invites her inside of the stone labyrinth, where she meets a faun (played by the versatile Doug Jones). The faun tells her she contains the soul of the onetime princess of his underground world, which he describes as a wondrous kingdom. He explains that Ofelia can return to the kingdom if she completes three tasks.

Ofelia attempts to complete his dangerous tasks while her mother’s pregnancy grows more and more complicated, while the Rebels combat the Fascist Capitán Vidal, and while Vidal murders and dictates his troops and Ofelia’s life. There is a burgeoning pressure that builds throughout, though this is not a fast-paced thriller, but a thoughtful, sometimes horrific tragedy. The war isn’t nearly as tragic as the hopelessness it breeds in people. Ofelia eventually finds herself questioning the faun—is he telling the truth? Or does he have an ulterior motive? How can anything, even one’s fantasies, be pure and unspoiled in this environment?

I think the audience can read the film in two ways: Either the faun is real or he’s a figment of the girl’s imagination. If the faun and his world are imaginary, then Ofelia’s story is truly tragic, her innocence ridden with the leftover corruption of the war. If, on the other hand, he is real and Ofelia is destined to become princess, then the stakes are higher than we thought, as Ofelia must do everything she can to escape with her mother and unborn brother to this kingdom he speaks of.

Del Toro uses a minimum of computer-generated special effects. So much of Pan’s world, which Ofelia must enter to complete her tasks, appears very genuine in any reality—dreamlike or otherwise. As he did with the title character in Hellboy, elaborate make-up effects comprise the wonders of Del Toro’s film, adding tangibility to his fairytale characters. The costumes, characters, and sets for Pan’s Labyrinth are of Del Toro’s flawless design. It’s apparent from our first encounter with the faun that the director has a vivid imagination, on par with visionaries like Peter Jackson and Terry Gilliam. Achieving the excellence of The Lord of the Rings films, the special effects are not overly flashy or in-your-face, nor do they drive the story. They supplement it.

Much of Del Toro’s mythology was influenced by Greek myth. The faun refers to himself as the woods and the trees. Pan, in Greek myth, personified “everything,” meaning the universe, specifically the pagan universe. Furthermore, I saw a great resemblance between the “Pale Man” (see left image above) to the Saturn of ancient mythology. Saturn is represented as a monstrous figure that eats children and is often depicted as an older male. Spanish painter Francisco de Goya’s painting Saturn Devouring his Children (c.1823, right) bears a very similar figure type and likely inspired Del Toro’s Pale Man (also played by Doug Jones). One can see how a child might, in her subconscious, recall an image such as Goya’s painting, which was popular throughout the world, especially in Spain at the time this film takes place, and reuse that image it in her own fantasies as an icon of fear.

We’re never quite sure if the faun and his storybook labyrinth are real or if, like Alice, Ofelia has created this fantasy as part of a child’s escapist dream. The film doesn’t tell the audience if we’re seeing Ofelia’s reality or another one. Del Toro gives us a choice, or perhaps “hope” is a better word… He gives us the hope that Ofelia is not dreaming, that her adventures in once again becoming the princess of the faun’s world are part of a beautiful but disturbing reality. We hope this is the case, because if it isn’t, then Ofelia’s world is filled with people like her sadistic stepfather. Del Toro has made a gorgeous, fervent, saddening poem of a film that displays the horrors of wartime cruelty via the purity of a child. The director’s vision has been sound in his films The Devil’s Backbone and Hellboy, but thus far, this is his most complete work. Pan’s Labyrinth is an endearing fantasy, the first masterpiece in what I hope will be a long and impressive career from the film’s director.