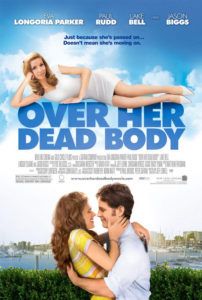 Over Her Dead Body begins just hours before a wedding, careless that we never get to see why the happy couple is in love. This becomes the movie’s fatal mistake, later forcing us to question, without answer, what these people saw in each other to begin with and why, thusly, the forced conflict continues to unravel. No different than her superficial character on TV’s Desperate Housewives, Eva Longoria Parker plays Kate, an obsessive type who dons caked-on makeup and runs about barking orders at the wedding staff. Flowers this. Hors d’oeuvres that. Yeah, sure, I love you too honey, but I want my wedding perfect. When an ice sculptor (Stephen Root) delivers a wingless ice-angel, Kate flips and commands him to bring back a winged one. As he’s leaving, a freak accident leaves her crushed by the very same sculpture.

Now dead, Kate finds herself in Heaven, the typical all-encompassing white version, with a wingless angel (Kali Rocha) attempting to give her some needed instruction. But the obtrusive Kate continues to bark, so her helper-angel disappears and leaves her without a clue about the afterlife. Kate finds herself back on earth a year later, in ghost form, standing over her would-be husband Henry (Paul Rudd). A veterinarian, he seems considerate and kind, with a laid back sense of humor—certainly not the trophy sort Kate would find winning.

After supporting roles in almost every comedy from 2007 (including Reno 911!: Miami, The Ex, Knocked Up, The Ten, and Walk Hard: The Dewey Cox Story), Paul Rudd finally lands himself a starring role. I’ve complained before that he should hold-out for a lead; alas, I was wrong. His dry humor and deadpan delivery are welcome in small doses. But his Henry is obtuse, often blankly so, and since the movie involves women talking about him rather than to him, many of his scenes consist of long, vacant stares into nothingness. He’s not particularly likable or dislikable; he’s just there for women to fight over. You’d think that with second billing Rudd’s role would be more substantial…

Henry can’t get over Kate’s death, though I couldn’t tell you why—all signs point to her being a stuffy b-word. In hopes of ending his mourning, his sister (Lindsay Sloane) sends him to the most unconvincing psychic ever, Ashley (Lake Bell), who she has provided with detailed information on Henry and Kate’s relationship. Ashley, who also runs a catering business out of her apartment with her gay friend Dan (Jason Biggs), pretends to be visited by Kate and tells Henry that her spirit wishes him to move on with life. When he does so by initiating a relationship with Ashley of all people, Kate begins haunting her. Ashley tries everything to rid herself of Kate, even an exorcism, but with no luck. Why is Ashley the only person who can see Kate? Why do we never see Ashley with any clients seeking psychic direction after Henry? Why is Ashley not more intrigued by finally seeing a ghost? Who would ever believe an exorcism takes two minutes? What does Dan’s subplot have to do with any of this? All questions go unanswered for an irregular dose of romantic comedy unreality.

Writer-director Jeff Lowell doesn’t show Longoria Parker ripping her face off or forcing Ashley and Henry to sing “The Banana Boat Song”. Kate’s ghost walks through walls, throws her voice, and remains otherwise pleasant, making lighter fare like Ghost look like a horror show in comparison. Lowell’s story is squeaky clean and uninvolving, relating only the occasional laugh. One scene features Longoria Parker releasing phantom fart sounds near Henry, to throw Ashley off just before she and Henry make love. Funny, not hilarious.

Over Her Dead Body is sappy to naïve extremes, operating without one iota of originality or inventiveness. The movie’s mediocrity is matched only by its slack humor centered on anti-cat jokes and situational comedy barely worthy of prime-time television, much less a Hollywood movie. None of its stars, particularly Lake Bell, seem suited for the material, nor do they beckon the audience’s sympathy. Every relationship feels forced for the sake of the set-up, which misses its comedic potential by a longshot.