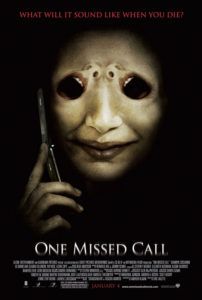 One Missed Call is one of those train wrecks you see coming from miles away, but you remain parked on the tracks just to see how bad the damage will be. Critics weren’t allowed prescreenings, which usually means the studio knows they’re releasing junk. I ventured out anyway and discovered that this horror movie, the very first new feature to be released in 2008, might be the laugh-riot of the year, albeit unintentionally. If this is any sign where the year is going, we’re all doomed. Doomed, I tell you!

Basing his film on the Japanese thriller Chakushin ari, director Eric Valette follows The Ring’s example by remaking a better foreign-language film with a plot about random victims killed by haunted everyday technological apparatuses. In The Ring, victims viewed a haunted VHS tape and died seven days later. Here, college students get a cell phone call from a dead person, dated in the future, and hear their own last words, scream, or muffled death. And on the future date noted on the cell, the recipient dies just after speaking their own afore-played last words, scream, muffle, etc.

Which brings the obvious question: Why, when these victims know their last words, do they still manage to utter them with such obliviousness? College dude Brian (Johnny Lewis) hears his voice saying “I’d loose my head if it weren’t screwed on.” Moments later he’s dead. Why not simply avoid saying that phrase, Brian? Or at least acknowledge the uh-oh of the situation once you’ve said it? Characters behave in such an offensively moronic way that the biggest plot hole is how any of them got into college.

Ed Burns plays Detective Jack Andrews, a movie cop of insurmountable stupidity and ignorance, even by movie cop standards. His sister was one of the cell phone-ghost victims, so when Beth (Shannyn Sossamon) shows up at the police station with her theory about this string of deaths, his interest peaks. The officer on the case, Mickey Lee (former stand-up comedian Margaret Cho, in an inexplicable cameo) doesn’t see a connection between these otherwise random deaths, because it seems she’s the worst investigator ever. Andrews points out that hard candy was found in each of the victims’ mouths, shouting “What about the hard candy? There’s gotta be a connection here!” Never has there been a movie character so excited about hard candy.

In an unintended hilarious subplot, future victim Taylor (Ana Claudia Talancón) turns to slimy reality television personality Ted Summers (Ray Wise) to help exorcise whatever demons possess her cell phone. Summers’ program sets up their operation inside a church and proceeds to film a boisterous priest shouting exorcism cantations at the girl’s cell. I could only laugh to myself—since the scene is shot with such devout seriousness, without even a shaving of humor—at the blatant idiocy of the man waving his arms about and commanding “Be gone!” at a cell.

Andrew Klavan wrote the script. You might remember his last work, entitled Don’t Say a Word, which was lampooned by the world for its annoying catchphrase “I’ll never te-ell…” Klavan and Valette somehow conned, if not brainwashed these actors into their roles. That’s the only explanation. Someone should make sure the cast is doing okay. Write a letter to their agent. Contact their shrink. I’m most worried about Ed Burns, who remains a talented writer-director (see The Brothers McMullen or She’s the One); if he needs money to produce his own films, he can just ask, I’ll send a few bucks—there’s no need to degrade himself to such sadomasochistic extremes for a paycheck.

Even though most critics won’t go to a movie they weren’t asked to screen, I went anyway—apprehensively, as one always should to a movie no one has faith in. I caught myself laughing when I wasn’t supposed to be, but then I looked around and saw, yup, everyone else in the theater was laughing too. Take some friends to a matinee, or wait a few months and rent the DVD, because the only way to enjoy this picture is to mock it, and loudly.