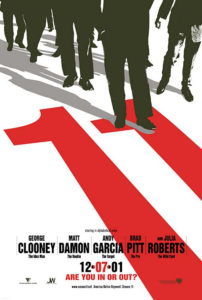 There’s something outrageous about a movie where over $160 million is stolen from a ruthless Las Vegas casino owner and not one f-word is uttered, nor does a single person die. Perhaps it’s the stigma attached to Sin City from movies like The Godfather II, Casino, and Leaving Las Vegas—depicting mob mentalities and desperation as the lifeblood of Vegas. But those are behind-the-scenes pictures, showing the bloody underbelly. Lest we forget about the glitz and glamour, about the flashing lights and celebrities on every street corner. With Ocean’s Eleven, director Steven Soderbergh and screenwriter Ted Giffin (Ravenous) have evoked the Hollywood of yesteryear with a remake of Frank Sinatra’s 1960s Rat Pack vehicle of the same name. Class is the name of the game. With all the flash of The Strip, the film’s stars glimmer, its dialogue charms with wit and cool, and the overall production has a self-assurance in those elements that resonate throughout.

The impressive cast, led by George Clooney and Brad Pitt as Daniel Ocean and Rusty Ryan respectively, assumes Rat Pack-Nouveau status early on. It builds for twenty minutes until reaching the title’s quota. Their mission: rob three casinos (the Bellagio, the MGM Grand, and the Mirage) owned by ruthless Las Vegas magnate Terry Benedict (Andy Garcia) and walk away, with knees and head in tact, and with more than $15 million a piece.

Ocean, paroled from prison where he says his ex-wife put him, makes Benedict his target, as he’s the man with Tess (Julia Roberts), Ocean’s ex. Rusty isn’t pleased to discover this truth, as he points out: Tess doesn’t split eleven ways. But if all goes according to plan, Benedict will be minus the contents of his casinos’ shared, underground, laser-protected, motion-sensitive, armed-guarded, super-secure vault—not to mention Tess. Of course there’re impossible tasks and security measures to overcome, whose solution are for the most part unexplained to us. We know Ocean wants Las Vegas’ power shut down for a good 30-seconds; we know an exact replica of Benedict’s vault is constructed for “practice”; we know one of the eleven, Saul (comedy legend Carl Reiner), is posing as a wealthy German gambler who wants to store bogus emeralds in Benedict’s safe. But as to how these items are used, who knows? Part of the joy is that though Griffin was careful enough to write nearly his entire film around the planning of a heist, we’re left clueless as to exactly how it’ll be done until the score is over.

Garcia is notably cold in his role, in a brilliant way that reminds us of a caricatured 1940s gangster—the kind where he gives the phone a nice long look before hanging up. Post heist, talking to thief Rusty Ryan on the other end of his cell, Garcia delivers the line, “If you should be picked up buying a $100,000 sports car in Newport Beach, I’m going to be supremely disappointed.” Garcia plays a gangsterish version of real-life Vegas casino mogul Steve Wynn, whose daughter was kidnapped in 1994. The specific Newport/sports car reference comes from Wynn’s kidnappers, caught in Newport trying to buy a Ferrari with his cash.

Authenticity is Soderbergh’s greatest trick. We believe the film’s setting and characters, so we buy the otherwise ludicrous plot. Shot on location in Las Vegas, part of the film’s joy takes place off camera. Wisecracks between Ocean’s crew are delivered with a half-smile; if you remember, off-duty cast members were heavily publicized for enjoying the Vegas night life. Clooney alone was said to have blown his salary on gambling, drinks, and who-knows-what else (rumor is that he had a keg of Guiness installed in his hotel room). The on-camera result is camaraderie among actors who clearly enjoy each others’ company. Clooney, Pitt, Damon, Garcia, Roberts, and Cheadle, all of whom could carry a movie on their own, took pay cuts from their usually high salaries for the experience. Granted, the charisma between Clooney and Roberts may not be up to the Soderbergh-standard of Clooney and Lopez in Out of Sight (which is mostly Roberts’ doing). But this is a minor nitpick.

There’s little that doesn’t work about this picture, mostly due to Soderbergh’s expert direction. Previous to this, Soderbergh impressed critics with art films like sex, lies, and videotape and Kafka; skill like that applied to such a fluffy caper flick makes Ocean’s Eleven a pleasure for any crowd, even arthouse folk. He doesn’t sleep through helming this film either; for example, he includes references to the notorious tennis scene from Hitchcock’s Strangers On a Train during a casino demolition (for those of you film buffs). And there’s a cameo by TV’s Topher Grace, playing himself, for those of you who aren’t. We’re graced by proficient direction and entertained by line after line of slick dialogue, cleverly delivered by one of the most impressive A-list casts ever assembled. Thoroughly pleasant amusement, this is skilled filmmaking at its most relaxed, enjoyable best.