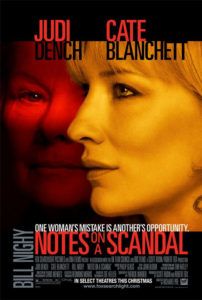 In Notes on a Scandal, desire comes from watching, and obsession is bred from desire. Several characters are infatuated with a beautiful woman, or rather the idea of a beautiful woman, while the beautiful woman herself becomes preoccupied with her desires. The two main characters, Barbara and Sheba, see the problems of the other, but cannot see their problems. They’re experts at outward looking, not inward reflection. The film discusses interpretation, and how the subject sees what she wants to see; the watcher distorts a person, so the viewed subject conveniently fits with her needs.

Judi Dench plays Barbara, a history teacher at an inner-city London high school, who believes her job consists of “maintaining order,” that there’s no use in trying with students nowadays. She’s known among her coworkers and students as a ball-buster. Barbara writes in a diary every day, making witty, poetic, and often cruel observations about those around her. The film’s narration consists of writings from this diary. Aside from a cat, she is alone in the world; she has only the diary to preoccupy her mind. Her diary is the only outlet to which she can be sincere, though she rarely is.

Cate Blanchett is Bathsheba (Sheba for short), the new art teacher at Barbara’s school. Barbara describes Sheba as an adolescent among the teachers; the students regard her as an equal, someone who looks and acts like them, thus Sheba lacks authoritative respect. With jealous detail, Barbara critically regards Sheba as a “bohemian” beauty. But when the two women meet, Barbara’s views change. Sheba is a mother of two; the older child has Down syndrome. Her husband is much older, not the trophy husband Barbara expected. Barbara’s interest is sparked. She doesn’t respect Sheba, but instead becomes infatuated. There are hints that Barbara is a lesbian. Her fascination with Sheba originates from attraction, or perhaps simply out of loneliness and self-deception. Barbara describes her Sheba’s idyllic image and ruminates, saying “She’s the one I have waited for.”

The name “Bathsheba” originates from the Biblical story in II Samuel 11, which tells of a scopophiliac’s desire and sexual fixation. As the tale is told, King David is walking on the roof of his house. Below, in the distance, he sees the wife of Uriah (one of his soldiers), named Bathsheba, bathing. In true voyeuristic fashion, David falls in love with, or at least with the idea of Bathsheba. The two eventually commit adultery and soon after she becomes pregnant. Eager to hide their secret, David invites Uriah back from battle in hopes that the couple will sleep together and the pregnancy will be considered Uriah’s doing. Yet, Uriah prefers to stay with his fellow soldiers, for camaraderie’s sake. And after all attempts fail to get Uriah and Bathsheba in bed together, David eventually sends word to Uriah’s general, asking him to put Uriah in a hopeless situation. Uriah is killed, and David and Bathsheba are married. But the situation displeases God, who sends Nathan the prophet to point out to David the egregiousness of his sin. David repents, and Bathsheba’s child dies of illness a few days after being born.

Not unlike the Bible story, the film’s Sheba is a beauty; even her second child could be considered a relatable version of “ill,” with Down syndrome. Her husband, played by Bill Nighy (the actor behind Pirates of the Caribbean: Dead Man’s Chest‘s Davy Jones and Shaun’s stepdad in Shaun of the Dead), is much older and “distant” from Sheba, too aged to keep up with her sexual desires. Sheba’s male coworkers gawk at her; the students look too. And Sheba is not unaffected by these gazes; she notices the attention of a fifteen-year-old student. Eventually, so taken with the advances of someone representing youth and sexuality, she finds herself in an affair with the child. Lost in lust and attention from a person she believes truly wants her, Sheba dupes herself into ignoring the immorality of what she’s doing.

Barbara now considers Sheba her best friend and writes in her diary about their glorious future together—they will be friends forever. And when she accidentally spies on Sheba and her student lover together, like the most devious spinster, Barbara uses that secret to her advantage. Completely aware of her manipulative actions, it becomes clear Barbara is a monster. She confronts Sheba, gets her to confess, and then twists that trust into a way of solidifying their friendship via subtle blackmail. Sheba agrees to stop seeing the boy, in fear of losing her family, but for some reason unknown to her she is drawn her illicit lover and thus puts her life and family at risk for a sexual whim.

Dench and Blanchett both give thrilling performances, particularly Dench, who once again proves why she’s been nominated for six Oscars—she is capable of anything. Dench plays Barbara with a scornful coldness; her feigning sincerity isn’t obvious to the film’s characters, but it’s blatant to the audience thanks to the narration. Her vindictive puppeteering of Sheba plays out like a chronic disease, originating in the past, and likely to reoccur long after Sheba is gone. Blanchett gives a likewise brilliant performance, as she too, in the short expanse of her career so far, claims the reputation of an actress capable of anything. Her Sheba is a victim to her own desire, yet is subject to the desires of so many others. Both prey and unintended predator, like the Biblical Bathsheba she is the center of so much despair. Blanchett perfectly shows the vulnerability and helplessness to Sheba’s sexual and emotional confusion. In other scenes, Blanchett flawlessly allows Sheba to lose control, overwhelmed by her position as subject.

We cringe as scene after scene depicts deplorable behavior, so in the relatively short running time, the audience is put through a gauntlet of dramatic punishment (in the best way possible). None of the characters are likable, but we are somehow helplessly empathetic to them, regardless of the atrocious things they do. And Phillip Glass’s extraordinary score keeps a constant, vigorous pulse throughout the movie so that even the most somber scene becomes dangerously intense. One of the best dramatic character studies in some time, Notes on a Scandal harbors great performances, supple writing, and startling content. It is one of 2006’s most impressive films.