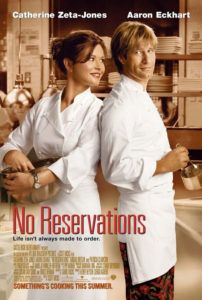 Skip the movie popcorn and large soda, abstain from Dots or Milk Duds, and certainly pass up the cheesy nachos if you’re attending a screening of No Reservations. No food you can buy at the concessions stand will be sufficient; it might even be guilt-inducing in comparison to the elegant meals prepared in the film. I’m not suggesting you sneak in food, as that would be irresponsible of me. Although, if you have a way, I suggest stuffing some fine china under your shirt. Make sure you bring a fork and knife. Throw some scallops in your pocket. Bring a container of saffron sauce in your purse. Who knows where you should put the truffles…

Based on Mostly Martha, a German comedy from 2001, don’t expect brilliance from No Reservations. The story is familiar, though handled with exceptional respect and acted wonderfully by its two leads. Chef Kate (Catherine-Zeta Jones) is considered one of the best in New York, even the world. She leads her kitchen in a classy New York restaurant with an iron fist; her kitchen is governed by her attitude, which flows from an anal-retentive attention to detail and pride in her work. The restaurant’s manager (Patricia Clarkson) has to virtually hold Kate down when a customer sends food back. Kate’s personal life is likewise mandated by her own structure, which her shrink (Bob Balaban) believes should be released.

Throw in young Zoe (Abigail Breslin), Kate’s niece who was recently orphaned from a disastrous car accident. Kate now has custody, and so she takes a week off from the restaurant to help fragile Zoe adjust to her mom’s death. Forgetting that kids primarily survive on junk food nowadays, Kate makes the mistake of serving young Zoe fish, head still on. Zoe doesn’t eat; in fact, she flat-out tells Kate not to try so hard. Kate’s hectic schedule hardly allows for a child either. She wakes up early to get the best selection from the fish and vegetable markets and is out late closing the restaurant. When Kate eventually goes back to work, she finds a new Sous Chef working in her kitchen. Nick (Aaron Eckhart) is loud, sings opera, and distracts Kate’s staff with jokes and long stories—but damn if he isn’t dreamy. Which makes her wonder if she’s been wisped away by a competitor moving in on her territory. Suddenly all of Kate’s structure shatters; her life and job mutate into some other monster. Zeta-Jones handles conveying bouts of anger and saddening emotion with expert skill, making me wonder why she’s usually only in supporting roles.

Aaron Eckhart plays the romantic-comedy charming guy, the one who’s perfect and impossible for any girl to find (or so I hear). Eckhart hasn’t really found his acting niche yet, or at least not accepted that he’s better in his seedy roles like those in Thank You for Smoking and In the Company of Men. His other roles always delegate the attention to another star. And yet, he’s proved before that he’s capable of sustaining a movie on his own. Now he simply needs something better quality than The Core or Suspect Zero to sustain himself. And Abigail Breslin confirms why she was nominated for an Academy Award this year for Little Miss Sunshine—she is clearly one of the best child actors working right now. She’s not a fluke; she’s an actress from whom we’re getting consistently strong acting. Here’s hoping she doesn’t fall into the trap of success.

No Reservations may be formulaic, a common romantic comedy, but director Scott Hicks (Shine, Snow Falling on Cedars) clearly has talent enough to give this movie the illusion of authenticity. We can’t help but be enthralled in scenes detailing the magic and art of great cooking; this is a movie that has a special place for people who enjoy beautiful food. That alone should be able to distract you from any rom-com clichés.