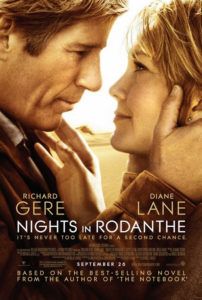 Nights in Rodanthe takes place in an impossible romance universe where the laws of nature and plausibility don’t apply. Here characters are meant to speak sappy dialogue and convey overwrought feelings no human outside of a Hollywood movie or some maudlin novel could express. Nicholas Sparks wrote the book. Maybe it’s an excellent text—I haven’t read it, so I wouldn’t know. The movie, however, is drenched with its own tears and needs a stern wringing-out before advancing into the realm of tolerable.

Let me first say that I’m a devoted romantic, and by no means out-and-out opposed to the genre. Those who would relate my ensuing negative review to being gender biased couldn’t be more wrong. I don’t like this film not because I’m a man and prefer sports and action fodder, rather because it’s a lousy story. At times throughout, I could see where Sparks’ book might actually make a good read, as sometimes we interpret things differently on the page than they might appear on film. We aren’t allowed the supporting device of imagination with this kind of movie, though; the entire reality of the story is placed onscreen for us to absorb, without any conclusions to fill in.

Diane Lane plays Adrienne Willis, who for a long weekend takes over managing a beachside hotel in Rodanthe, North Carolina for her owner-friend Jean (Viola Davis). She’s using the time to mull over whether or not to let her cheating husband Jack (Christopher Meloni) back into her life, as he wants to come home after a year of separation. There’s only one guest for the duration, a weekend with a reported hurricane approaching: Dr. Paul Flanner (Gere), a sourpuss who arrives to settle things with the husband of a patient that died under his care. What’s more, Paul huffs about his son (James Franco), also a doctor, who left to practice medicine on a mountain somewhere in Central America.

What besides love could happen when a man and a woman are alone in an inn, complete with empty beds and couches everywhere calling “Use us!”—especially when the man and woman look like Richard Gere and Diane Lane? Having starred together in The Cotton Club and Unfaithful prior to this reunion, the two make attractive leads, and clearly the producers couldn’t resist putting them back together again. Unfortunately, aside from dropping the occasional tear, neither star does much acting.

When the nameless hurricane arrives, we can’t help but think of footage in recent years of waterlogged cars, houses demolished, and trees uprooted by powerful winds. None of that applies in this fantastical account. Somehow the beachfront lodge, looking as ramshackle as the Weasleys’ home from the Harry Potter series, manages to be unaffected by the ensuing storm.  There’s some debris about the place, sure, but otherwise not so much as a shingle goes missing. And who would make love during a hurricane? I’d be more concerned about making the flight to Oz. Maybe in their world hurricanes don’t devastate whole sections of the country. Maybe in their world hurricanes are merely some gusty winds and a little rain. It appears so, as Adrienne and Paul are none too worried about their fates, and more concerned about rounding third base into home.

Part of the problem is this weather-assisted climax, which, aside from being an obvious device to get these characters into bed, occurs too early in the movie, leaving the remainder aimless. The other problem is everything after the hurricane, after Adrienne and Paul are separated, is uninteresting. As a result, Nights at Rodanthe, helmed by first-time director George C. Wolfe, stretches romance to the breaking point until literally severing any potential connection, leaving the audience with nothing to cling to. Melodramatic in the worst ways, this story throws away any chance it had of living up to its advertised romance, and instead forces an unsavory downer into the audience’s throat. Not only was I offended as a filmgoer by the overly glossy production, I was offended as a romantic betrayed by an artificial and unsatisfying conclusion. Which is worse, you might wonder? In this case, the latter.