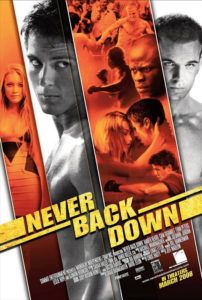 According to Never Back Down, spoiled high-schoolers bash on each other in underground UFC-wannabe groups. Who knew? The first rule of their fight club: don’t tell mom and dad you’re punching someone’s lights out on the beach of their flashy mansion. The second rule of fight club: don’t ask why your “teen” opponent looks like he’s thirtysomething. The third rule of fight club: become a master of mixed martial arts in a month, even though it takes pros years and years to develop their skills.

Indeed, cheesiness floods this movie, a ridiculous child of Fight Club and The Karate Kid and Bloodsport. We begin with Iowa football star Jake Tyler (Sean Faris, recalling a young Tom Cruise) decking an opponent on the field his last game before his family moves to Florida. Caught on video, everyone has already seen Tyler’s fight on YouTube when he arrives at his new Orlando high school (an east coast “90210”). Tyler seeks out brawls like a drug addict, as he’s riddled with self-destructive daddy issues. And so, he’s easily baited into fisticuffs with his school’s resident Randy Couture, Ryan (Cam Gigandet), from which Tyler receives the beating of a lifetime in front of everyone. That list includes his would-be sweetheart Baja (Amber Heard), the prototypical movie “hottie” who just-so-happens to be the girlfriend of aspiring neo-Nazi Ryan, breaking Tyler’s heart.

Not only do audiences get totally awesome fighting, we also get a full dose of totally awesome romance. But wait, there’s more: Totally awesome training montages! Finding support in newfound friend and comic relief goofball Max (Evan Peters), Tyler learns mixed-martial arts from Max’s trainer Jean Roqua (Djimon Hounsou, from Blood Diamond). Taught roundhouse kicks and shifty escapes, Tyler absorbs a lifetime of instruction over a few training interludes laden with hokey motivational tunes. And just in time for “The Beatdown,” a secret fighting tournament where a teen’s manhood is either validated or stripped-away (not literally) for his remaining years.

When the final showdown begins, instead of chanting “Kumite” like in Bloodsport, spectators sing “Beatdown” repeatedly. Tyler takes jabs to the ribs, inciting director Jeff Wadlow to flash an X-ray image of his damaged insides, as if the pained expression on Faris’ face wasn’t enough. While enduring Tyler’s Van Damme-style bouts, perhaps we’re meant to ignore the otherwise obvious homoeroticism of young, ripped, sweaty boys rolling around on cushy mats. But such displays are equalized by an ever-abundant exhibition of scantily-clad bikini bimbos cheering fighters on, ooing and ahhing over their muscles. It’s all very absurd, shot like a music video with flashy lights and over-edited action.

Curious that the film never addresses moral or even legal implications of solving one’s problems with violence. Police are nonexistent, apparently oblivious to Orlando’s underground tussle groups. When the plot calls for it, Tyler’s dysfunctional mom (Leslie Hope) chimes in with a lecture, or Roqua tells Tyler to control his anger. But even Roqua’s mandate that no one fights outside of his gym gets tossed out the door for the sake of justice. Writer Chris Hauty, whose only other credit is Homeward Bound II: Lost in San Francisco, fails to add any sense of meaning to the fights beyond revenge or pride. At least Fight Club gave its combat purpose, which was later invalidated as an ironic and satirical oversimplification.

Despite creating a boiling desire to see sociopath Ryan receive his due beating, Never Back Down fails to involve viewers. In fact, when Tyler eventually prevails, Ryan’s less-than-spectacular (but inevitable) defeat feels like punches were pulled, considering his previously committed crimes (including a savage thrashing of Max). Meanwhile, little is done with Hounsou’s trainer Roqua, an admittedly interesting but barely explored character. Aimed at teen viewers, no doubt the film will attract a slew of young dudes and chicks to the theater, entertaining those few not familiar with the aforementioned fight flicks, but begging ridicule from the rest of us.