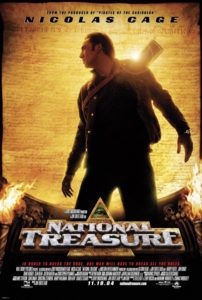 National Treasure rips off the Indiana Jones franchise, and so I can’t defend it. Perhaps it’s the clue-laden hunt for treasure; the reluctant father-son adventure team; the girl hanging over a bottomless pit, having to decide what’s more important: her grip or an artifact. Or, perhaps, it’s that advertisements and some critics (whose names will be withheld, so as not to promote violence) called this movie “the next Raiders of the Lost Ark.” I am sorry to report, though it should come as no surprise, that this Nicolas Cage movie is not the next Raiders.

The movie is about an ancient treasure that has grown in size over thousands of years. It began before ancient Egypt, but was passed down from owner to owner, growing with every new possessor, protected by secret societies abound. The latest were America’s Founding Fathers, known as the Masons, who created an elaborate set of clues to hide their treasure from the British. The last surviving Mason, Charles Carroll, gave the last remaining clue to his stableboy. That stableboy was the ancestor of Benjamin Gates (Nicolas Cage), and his family of pseudo-adventurers and conspiracy theory crackpots. Despite centuries of Gates family treasure hunters, none of them were able to construe what Carroll’s clue meant.

Suggesting only the word “Charlotte,” the clue leads Ben Gates north, where he’s deduced a sailing ship is buried in the ice. After picking out the square foot of ice in all the Great North, Ben digs with a pick on just the right spot, and finds, after chipping through two inches of ice and snow, the Charlotte. Inside, another clue awaits his team. And after that, there’s another one, and another one, going on for what seems ever and ever. We begin to understand why Ben’s father, Patrick (Jon Voight), believed the treasure to be a myth.

This movie is filled with puzzle-solving of complex geographical and American history clues, mixed with oftentimes absurd legend. Nicolas Cage monologues through moments of impossible deductive reasoning, his goofy delivery making it all seem like a Saturday morning cartoon. Ben determines the next clue resides on the back of The Declaration of Independence. Too bad, he thinks. But not his backer, the villainous Sean Bean, whose Beanage is in no short supply in the movie; his character resolves to steal the Declaration. But as everyone knows, the only way to stop Sean Bean is to kill him with an Emerald crossbow, or simply steal the Declaration before he does.

Gates is accompanied by National Archivist Abigail Chase (Diane Kruger), ironically a foreign-accented woman who eventually believes in Gate’s treasure myth because she was duped by his receding, highlighted hair. Sadusky (Harvey Kietel) is the lackadaisical FBI agent on Gate’s tail. And I can’t forget Gate’s sidekick, the techno-wiz Riley (Justin Bartha), who single-handedly makes this movie more annoying than it had any cause to be. Riley is the comic-relief, and equivalent to Jar-Jar Binks, and the primary reason National Treasure fails to reach anywhere near the greatness of Raiders.

Jerry Bruckheimer produced the movie under the Disney label, bringing his signature air of BIG to every aspect of the production. I am continually amazed that his directors all work in the same style. Perhaps Bruckheimer is the last remaining directing producer, the way David O. Selznick was in Golden Age cinema. Having previously helmed Disney’s Rocketman and The Kid, here John Turteltaub transitions with manic speed, swoops his camera nearing Michael Bay proportions, and sets his action scenes to that loud Bruckheimer-type music. I can only assume that Turteltaub is just a name, with no actual consequence to Bruckheimer’s film.

There’s something about a yarn on the hunt for buried riches, the purity of it is bound to classical storytelling. The problem with this treasure hunt is that when we eventually find the cache, barely a moment is spent with reveling in it. It’s a MacGuffin, to be sure, so the treasure could be anything: a Maltese Falcon, the Holy Grail, a golden fleece, etc. But part of me wanted the movie to take a slow pan over every inch. Maybe it’s just my personal interest in history. Maybe I was taken by the Gates family’s obsession with the treasure. Maybe I was just bored with the chase and more curious about the booty. I suppose that’s why I’m giving National Treasure as good a rating as I am. Despite the television commercial-like direction, hammy acting by Cage, and numerous historical inaccuracies, I cared about the treasure. Which means this movie had a couple of hooks in me, as much as I don’t want to admit it. Alas, part of me still wishes they had made a sequel to The Goonies.