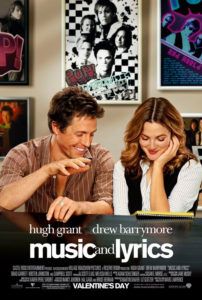 During the opening credits of Music and Lyrics the audience is treated to mock music video for a fictional 1980’s British duo called Pop!, clearly a send-up of Wham!. There are lots of swaying and suggestive dance moves, all featuring star Hugh Grant dressed up in tight white vinyl and even tighter black pants. Complete with checkered black and white sets, big hair, and a ridiculous music video “story” recalling every ‘80’s pop video you’ve ever seen, this is the funniest part of the movie and the producers knew it. I suppose that’s why, to my irritation, they kept recycling the joke.

Hugh Grant plays Alex Fletcher, “the other guy” of Pop!, who is left alone when the more popular of the two splits off and like Wham!’s George Michael, becomes a success on his own. Rather than develop a real character, writer and direct Marc Lawrence (creator of Miss Congeniality 1 & 2) makes Fletcher completely dependent on what he used to be… In other words, he’s an ongoing crotch-thrust and butt-shake. And frankly, the joke isn’t funny enough to last an hour and a half.

Grant plays his same rom-com character from Notting Hill, Two Weeks Notice, and Bridget Jones’s Diary—the shrugged-shouldered, cleverly droll, often overconfident, open-buttoned collared-shirt guy. While it was amusing in his first few films of this type, it’s now clear he’s going through the motions. Grant is capable of real acting; see Sense and Sensibility, Extreme Measures, or much his early career work. He’s now typecast into this prison as the loveable Brit he can’t seem to escape; I wish I could send him a cake with a metal file inside. If only it were that easy.

Working at amusement parks for pennies, for audiences of middle-aged women who had a thing for him when they were teenagers, Fletcher is desperate. His agent (Brad Garrett) somehow introduces him to modern superstar Cora Corman (the film’s equivalent to Britney Spears and Christina Aguilera, played by Haley Bennet—whose role is so flatly and emotionlessly portrayed, it made me uneasy). Cora, a fan of Fletcher, wants him to write her a pop song for her new album. With the chance to get back on top, Fletcher jumps at the opportunity. But Fletcher’s specialty is melody, not lyrics… Luckily, he discovers his new plant sitter Sophie (Drew Barrymore) has a knack for rhyming and convinces her to work with him over the next few days to complete the song by his deadline.

Sophie is eccentric, an oddball hypochondriac that needs to be supported as much as she is independent. Her type of annoying is normally reserved for the wacky friend in a movie like this one; but this character, something we’ve seen in a dozen romantic comedies, has now graduated to lead. Except, only for the first half hour do her truly peculiar characteristics show; as the film goes on, they die down, and Sophie goes straight. It’s never an issue that’s addressed in the film; one minute her eccentricities are there, the next minute they’re not.

Grant and Barrymore do a fine job creating characters both witty and endearing. Barrymore excels at being sympathetically charming; whenever she cries, I feel like crying—it’s something in those puppydog eyes of hers. Fletcher and Sophie each have their share of problems, as it wouldn’t be a romantic comedy if they didn’t. Fletcher is obsessed with success, both in the past and in the future, which leaves him fleeing from right now. Sophie doesn’t trust herself, or her writing ability, though it’s clear to Fletcher she has talent.

For a while I even cared about them falling for one another, but their problems are minuscule compared to the laundry list of issues with this script. The corny song at the finale wherein Grant publically declares his love recalls Barrymore’s own The Wedding Singer. The off-and-on references to TV, everything from American Idol to cheesy ‘80’s where-are-they-now specials, ousts everyone not from a TV-friendly audience. As a result, the film is sort of like TV: there’s nothing really new, it’s all vaguely familiar, and it relies completely on repetition.

Throughout the film, you’ll be subject to Hugh Grant thrusting and shaking his butt, which admittedly was laugh-out-loud funny during the opening mock-‘80’s video (yet that was the first five minutes of the movie; what about the rest?). The film didn’t stop; the same joke continues endlessly and is beaten into the viewer’s head until you almost feel sorry for people involved. How sad, I thought, that writer-direct Marc Lawrence couldn’t think of anywhere else to go with his script beyond crotch-thrusts and butt-shakes. Perhaps he should have found an awkward plant sitter to double as a script doctor.