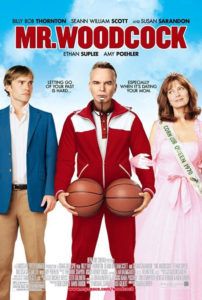 Mr. Woodcock makes one film-ruining mistake: calling itself a comedy when the events therein are more suited for a Lifetime movie about mistreated children. Billy Bob Thornton plays an abusive gym teacher. He forces his asthmatic students to run endless laps and throws basketballs at their heads. When one of Woodcock’s traumatized students, John Farley (Seann William Scott), grows up to become a damaged self-help guru, he returns home to find, like some twisted nightmare, Woodcock is dating his mother (Susan Sarandon).

John left his small Nebraska town long ago, making a name for himself with his new book about burying the past. He’s followed by a fast-talking alcoholic snoot of an assistant played by Amy Poehler, in another wasted background comedic role that doesn’t do her talent for improv justice.  Formerly the fat kid of Physical Education class, John has since compulsively lost weight. It’s clear he’s been traumatized, as he hears Woodcock’s voice in his head doling out insults, inciting John to endlessly jog and avoid pizza. John returns home to receive the prestigious “Corncob Key” to his small farmtown, forgoing a career-making interview on Oprah to avoid his own book’s advice and confront his troubling past: Woodcock.

John’s mother Beverly seems oblivious to Woodcock’s reputation with the kids, that his verbal and at times physical abuse has scarred his students. She misses Woodcock’s underhanded comments to John, whose face is rubbed in the fact that Woodcock is sleeping with his mother. “You must like getting spanked Farley, I guess it runs in the family,” Thornton quips in his southern accent. This makes for dozens of frustrating moments with the same level of humiliation brought about by Meet the Parents-like situations. It all becomes worse when Beverly announces she’s accepted Woodcock’s marriage proposal.

John tries to prove to his mother that Mr. Woodcock is in fact evil, reducing himself to breaking into Woodcock’s house to find evidence that his mother is being cheated on. There’s the silly self-help cliché of Woodcock being a “winner” and John a “loser”, with the playing of various circus games at the town fair to prove it. As if repeatedly losing at a mini-basketball shoot for a stuffed panda isn’t enough, when John finally wins a corn-on-the-cob-eating contest, he makes a fool of himself by overzealously rubbing it in. I remember scenes from Meet the Parents where Ben Stiller’s character was desperate to one-up Robert De Niro’s, usually resulting in the whole family blaming Stiller for some horrible resultant accident. Imagine that over and over again, except not funny.

Thornton has found himself typecast into the role of abusive assholes that pick on children, which, according to this movie, makes them better people for it. At least Bad Santa, School for Scoundrels, and Bad News Bears didn’t glorify Thornton’s slurs toward children and pretend that it’s acceptable behavior. Here, Woodcock is given the Educator of the Year award, despite his unlawful methods of teaching. One scene shows the grown-up John in Woodcock’s class, watching as his former teacher debases students in the same manner he once was. And yet, the film resolves that John is the bad guy, since everyone else in town thinks Woodcock is a saint.

But didn’t we see Woodcock calling a little kid every manner of “fat” insult imaginable?  Wasn’t Woodcock holding his foot on a student’s back while he attempted to do push-ups? Aren’t these methods criminal? Perhaps this small town believes in tough love, or perhaps we’re just supposed to ignore Woodcock’s behavior for the sake of comedy. Ultimately, the lesson of Mr. Woodcock is that “whatever doesn’t kill you makes you stronger”—that John should be thanking this abusive bastard for making his childhood a living hell and giving him an eating disorder, because hey, now John is famous and has a book. Would John have had his fame if Mr. Woodcock wouldn’t have been the jerk he is? Probably not. Carpetbaggers benefited from the Civil War, but that doesn’t mean they should get awards.

Despite the sickening justification of Thornton’s character, there were few laughs to speak of. Amy Poehler’s character seems ripped right out of Saturday Night Live and remains unfunny for it. Thornton’s performance is tired, something we’ve seen him play time and again. Seann William Scott overacts in every scene and proves he’s no Ben Stiller. And we’re not even given the satisfaction of seeing Mr. Woodcock eventually receive his well-deserved comeuppance. I got more of a giggle from asking the girl at the box office, “One for Mr. Woodcock, please” than I did the entire movie.