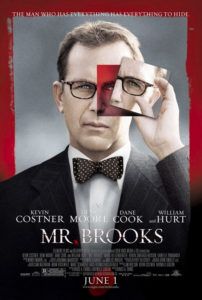 As the tagline goes, “There’s something about Mr. Brooks.” It’s not what the film’s producers want you to think, however. That “something” is whatever trick the filmmakers pulled to make this film work, regardless of it having one too many subplots and two too many serial killers. Kevin Costner is Mr. Earl Brooks, a congenial ‘Man of the Year’ from his noted philanthropy and success at running the local box factory. But Mr. Brooks has a secret life. A side to him his wife and college-bound daughter are unaware of. He attends Alcoholics Anonymous meetings for an addition; except it’s not whiskey manhattans he’s addicted to—it’s being a serial killer. (Who wouldn’t become a serial killer if after managing a box factory?)

Mr. Brooks’ best friend is Marshall (played by William Hurt, following his stellar performance in Cronenberg’s A History of Violence with another wonderfully creepy role); when we’re first introduced to Marshall it’s in the rearview mirror of a car, when Brooks is talking to his wife seated next to him. Marshall, we realize, isn’t real, but the side of Mr. Brooks’ personality driving him to kill. When the film begins, Brooks has been “on the wagon” for two years. Kill-free but still working at maintaining control, those AA meetings barely curb his desires; prayer helps too. All his effort ends in vain, as Marshall convinces Brooks to kill again, and when he does, there’s a witness.

Enter Dane Cook’s character, dubbed Mr. Smith, a peeping tom photographer that just-so-happened to catch Mr. Brooks on camera plugging his recent victims. He blackmails Mr. Brooks, but not for money, rather for the chance to witness the next murder up close. We’re never really told what Mr. Smith’s problem is, only that he doesn’t have the same inner ache to kill as Mr. Brooks. Smith is just overly curious, maybe. At one point, Cook’s character stops Mr. Brooks to let him know he has to “take a crap.” …A former stand-up comedian, Cook’s most notable film credits thus far have been the toilet-humored films Waiting and Employee of the Month. As a result, he brings down every scene he’s in to that low, low level. His kind of over-excited energy is out of place in what should have been a composed thriller. Instead, every scene with Cook felt like Silence of the Lambs via Comedy Central.

Also enter Demi Moore, the wealthy Detective Tracy Atwood, busting crooks to prove something, or maybe just for the thrill of it. Amid trying to finalize her divorce, Det. Atwood has to uphold her position as a field cop, otherwise her position is pointless. We’re forced to sit through several meetings with her divorce attorney; we listen to endless debates over how much of her vast fortune she’ll surrender to her soon-to-be ex. But she doesn’t care about that (and neither do we), since she’s determined to catch Mr. Brooks, who she knows as the “Thumb-Print Killer.” Moreover, Atwood is being stalked by another serial killer, known as The Hangman—a steroid-obsessed brute with a bleach-blonde crew cut.

There’s a third serial killer in this film, which may or may not be Mr. Brooks’ daughter, who recently returned home from college like a scared rabbit with a story about being pregnant and dropping out of school. Mr. Books and Marshall soon discover their daughter may have killed someone while away. When detectives come wanting to ask his daughter questions, he begins to believe that she too has his addiction. The film’s score sounds more appropriate for The Bourne Identity than serial killer drama. Every time a techno beat thumped into my ear during an action scene I wondered what the producers were thinking. Rarely are scenes ruined by music, but most of Mr. Brooks’ mood is sacrificed. And for what? The need to appeal to a younger crowd with a “hip” score? To reveal Mr. Brooks’ third personality: a rave-attending seventeen-year-old girl?

Mr. Brooks fails by assuming that ninety-percent of these characters are interesting, when it should be more a drama about a man divided. How I wish Bruce Evans and co-writer Raynold Gideon would have realized that their story dwelled in Mr. Brooks’ head. Whenever Costner and Hurt got into their long debates about serial killer sobriety, the screen blazed with great acting. In a way, Mr. Brooks is a metaphor for Costner’s career. It’s filled with a lot of unwanted junk such as the techno music, unnecessary subplots, and mediocrity by Moore and Cook. And yet, two impressive characteristics shine: Costner and Hurt, who, together, share the most screen time. Over the years, Costner has gotten a lot of guff for Waterworld and The Postman. But for every few stinkers he signs on to, there’s a JFK or Open Range to counterbalance his reputation. Mr. Brooks resides somewhere in between near success and total failure, as a split-personality-of-a-movie.