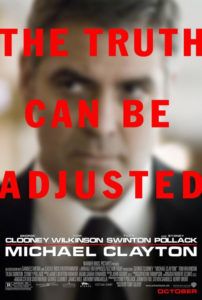 Michael Clayton is the simple-enough title for George Clooney’s character in his latest film of the same name. It’s a thriller/character study of a massive law firm’s “fixer”, an ambiguous job title for an ambiguous man. He refers to himself as a janitor, coldly explaining that his job is about numbers—the lesser the damage caused, the easier for him to clean up afterward.  When Clayton explains humbly that he’s not a miracle worker, it’s of no consolation to the highbrow businessman who just fled the scene of a car accident. But Clayton’s attitude is a symptom to his recent disenchantment his life over.

Michael Clayton’s first-time director Tony Gilroy gained Hollywood credibility after adapting the Bourne series from Robert Ludlum’s novels, turning them into box-office gold. He’s also the writer behind The Devil’s Advocate and Extreme Measures, pictures about corruption in a most absolute sense. His other work features villains that are evil establishments, working from a wicked logic that seems monstrous to whoever acts as a protagonist. His stories often assemble from unlikely situations, slowly building into incomprehensible conspiracies the hero barely thwarts, suggesting that as a writer his motivation is dramatic irony on a grand scale. This film’s antagonist is more suspect, certainly not the devil or some CIA spy network. Gilroy’s picture deals with corruption and money-grubbing executives to be sure, except the film’s primary concern is how the conflict’s resolution relates to its title character.

Michael Clayton is a smooth, confident man, indomitable and autonomous. His role as fixer requires that he provides or sees solutions that his superiors could not, or perhaps would not be willing to pursue themselves. He solves problems, ones nobody wants to solve. Though he’s been employed at his firm for seventeen years, he is not a partner, and he’s usually a mystery to those he’s helping. His career depends on utter control, so it’s a surprise that his personal life is in shambles. He’s divorced, has one child who he takes to school every day and sees on weekends. A recent attempt to break free from the fixer business and open a classy bar fell through, the investment plagued by his disaster-prone brother. Now he owes eighty thousand for the loan. When he says he doesn’t have it, friends ask if he’s been gambling again; clearly once a chronic problem, he defends himself saying he’s not hit the cards for some time. It’s curious to his colleagues that Clayton needs money, being so skilled at what he does and considering for whom he does it.

Already functioning in melancholy, Clayton wavers further when his close friend becomes the crisis to be fixed: Tom Wilkinson plays Arthur Edens, a partner in Clayton’s firm. During a billion dollar lawsuit deposition against his client, Edens bursts into a rant about diseases and impurities. The tirade is writhing with metaphor, the kind only an insane man understands. Edens goes on to declare his love for the female witness Anna (Merritt Wever), strips naked, and chases her through a parking lot in Milwaukee. Clearly a concern for the firm, they send Clayton, who finds Edens off his depression medication. Here, with his impressive diatribes and disheveled look, Wilkinson disappears into another role, this one who may be manic, or may be enlightened—or worse, both. He’s an actor that excels at a range of characters, from Carmine Falcone in Batman Begins to Mr. Fowler in In the Bedroom. I’m consistently surprised by what he’s capable of. This is one of his best performances.

Edens speaks out against U/North, a massive client who his firm depends on for millions in fees. Karen Crowder is U/North’s uncertain, fraught executive overseeing the lawsuit. Tilda Swinton gives Crowder subtleties we couldn’t get from another actress. She’s a desperate woman, trying to speak without error, outwardly in control yet internally unsure. Her long proposals are intercut with scenes of her preparation, usually dressing or looking in a mirror, with Crowder fumbling over word choice and tone. And her solution to silence Edens’ outburst is equally desperate to please—anything for the company. Another actress might have overdone her scenes. Swinton gives them appropriate realism; they’re human and void of artificiality. Michael Clayton is filled with these types of bravado performances, all bound in distinctions between nuance and emphasis.

And who better to play Michael Clayton than George Clooney, whose charm and severity onscreen has served him so well in the past few years? As his character begins to consider Edens’ claims that U/North is involved in some massive health scandal cover-up, Clooney humanizes the inner struggle: Does he fight for a company that buries their crimes? Does he finally act on the realization that he’s their custodian? The performance resounds an impressive inner struggle, evident in Clooney’s eyes and weary brow; this is his best work since Three Kings.

These are questions of plot, when conspiracies are not what drive this picture. It’s not Gilroy’s Bourne scripts, filled with elaborate chase scenes, martial arts fights, and techno music. The film is made with solemn music and the temperance and control of Steven Soderbergh, who is co-producer along with Clooney and their production company Section Eight. Its lighting reflects its main character—metallic and blue while Clayton is on the job, natural and brighter when in his personal life. But the saturation is subtle enough so that we aren’t distracted by its use, as was the case with Soderbergh’s Traffic. This is a thriller of characters, and Clayton is such a well written and performed one that his development is more satisfying that most action sequences. His question of morality is more rousing than flashy CGI. A death serves to correct moral decisions. An explosion answers greater questions of self-understanding and desire. But what could be more dramatically crucial than a conflict of conscience?