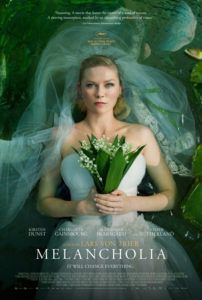 Lars von Trier creates another undeniably gorgeous mood piece with Melancholia, the provocateur-director’s investigation into how people react when faced with certain demise. The film arrives after a tumultuous period in von Trier’s career in which he struggled with a nasty spell of depression, culminating in 2009 with his angry and shocking attack on Nature, called Antichrist. He seems to find some kind of peace here by offering understanding toward the cruelty of the universe, against which he usually rallies. His film’s subjects are two sisters, Justine (Kirsten Dunst) and Claire (Charlotte Gainsbourg, French accent intact), both of whom react in curious ways when they discover a rogue planet—named “Melancholia” with a surprising amount of kitsch for von Trier—is moving through space and will inevitably collide with Earth.

The film opens with an apocalyptic prelude containing some of the most gorgeous cinematic compositions in recent memory, many evoking iconic paintings like Hunters in the Snow by Pieter Bruegel the Elder, as well as imagery from Resnais’ Last Year at Marienbad. Set to Wagner’s “Tristan and Isolde”, this operatic overture sequence combines a series of celestial bodies floating through space with human characters moving in extreme slow-motion, doom and calm playing together in each shot. The digitally-enhanced visuals rival similar ones in Terrence Malick’s The Tree of Life in their beauty: Justine’s weary face remains static amid a downfall of dead birds; she has the same expression as she floats on a pond like Millais’ Ophelia; Claire carries her child through her property’s golf course, her steps leaving impressions in the grass like footprints in the snow; Justine pulls her way through the tendrils of a black forest in her white wedding gown; static flickers on Justine’s fingers as she raises her hands in the air; stellar bodies reminiscent of 2001: A Space Odyssey show Melancholia devastating our comparably dwarfish planet.

After such majestic imagery, what follows in the first chapter titled “Justine” at first seems mundane. Justine arrives at her wedding reception with her husband Michael (Alexander Skarsgard) in tow. They are two hours late and the fussy wedding planner (Udo Kier) feels betrayed; likewise, so do Claire and her husband John (Kiefer Sutherland), who have paid for the expensive proceedings and hosted the event on their luscious property. In the tradition of The Godfather and The Deer Hunter, the reception occupies the film’s first half, where von Trier outlines his characters. Stricken with a debilitating depression, Justine forces a smile but is unable to cope; she must leave prior to cutting the cake for a bath. No doubt she inherited her disease from her bitterly divorced mother (Charlotte Rampling), who toasts the young couple by saying “Enjoy it while it lasts,” while Justine’s father (John Hurt, wonderful) lingers on the elated side of manic, but clearly has a few screws loose too. Moreover, Justine’s cruel boss (Stellan Skarsgard) lingers with a new lackey (Brady Corbet) to pump her for an advertising tagline. The proceedings quickly degenerate into an embarrassment for all, but none of the action feels like it has consequence, as Justine finds herself preoccupied by her disease. All the while, the audience wonders why anyone would hope for a happy marriage with her, and why she’s not medicated.

The second half, titled “Claire”, concerns the looming threat of Melancholia more, as Claire worries about “the scientists” having possibly miscalculated. John, an astronomy nut, assures her they are safe, that the wandering planet will bypass Earth as predicted. We know, from the opening, that he is either wrong or lying. Justine stays with Claire and John as she has destroyed her marriage, and grows so overcome by her despair that she cannot function; bathing and eating become impossible chores. And yet, her misery seems to fade as the breakaway planet brings The End closer. Her hatred for the world and the people in it will finally find a reprieve when everything’s destroyed. On the other hand, Claire panics; she wants to be around people, to “get to town”, or have a brief moment of happiness before everything is gone. John has the most interesting reaction and simply disappears altogether. Despite the second half becoming more involved in the doomsday story, the events are much less interesting; fewer characters, many of them less colorful than von Trier’s roster of unstable wedding guests, fill the frame and have less to do.

Of Dunst, it must be said that she displays a complexity in her performance more significant than anything she’s done since her incredibly nuanced turn as a vamp-child in Interview with the Vampire. She’s wholly believable as someone physically drained by her anguish, struggling to keep her false smile during the wedding, and then later subtly pleased but yet mournful over the world’s approaching doom. There isn’t a moment that goes by where Dunst isn’t operating on more than one level. The same can be said for Gainsbourg, who reteams with von Trier after her incredible performance in Antichrist. The supporting players during the wedding, however, make the most interesting characters, most of them filled by ingenious character actors. Hurt, Rampling, Kier, and Stellan Skarsgard are terrific, but Alexander Skarsgard has the unfortunate role of a nice guy—and in a von Trier film, that means he’s the most boring character onscreen.

Von Trier succeeds in depicting a largely symbolic, emotional attitude toward the apocalypse, but without any logic behind his central plot device. He presents the planet as a virtual MacGuffin in the film—the thing everyone, at least in the second half, is talking about—and then resists giving any scientific rationality to it. Obscure remarks like “it was hidden behind the Sun” explain away how this planet suddenly arrived in our solar system; but then von Trier doesn’t bother trying to render believable gravitational events that would no doubt occur if another mass entered our system, or ever came close to Earth. Granted, expecting accurate science from Hollywood, much less an arthouse director like von Trier, is asking too much. The director isn’t making a typical disaster movie here, complete with phone calls to the president, or easily swallowed scientific assessments when General So-And-So inevitably asks “Can someone explain to me what’s happening, in English?” But even the slightest sense of plausibility would have rendered the emotions all the more believable. And as much as von Trier tries to avoid common genre tropes, when the end finally comes, the CGI shot used to render the image seems silly and out of place in this otherwise beautiful film. Never would one expect von Trier to resort to a fireball-rolling-at-the-viewer shot like some Stallone movie, but here it is.

Earlier, The Tree of Life was mentioned, and Melancholia bears striking similarities to that film. Both films contain poised, other-worldly spatial compositions shot in a grand style and juxtaposed against a more fluid, handheld camera approach in the Earth-bound scenes. Both films suggest a connection between a celestial event and otherwise isolated, highly dramatic events on Earth. (Also, both films competed at Cannes. Malick’s film won the Palme d’Or. And though Dunst won Best Actress, von Trier was banned for several years after some careless remarks about Nazis.) But where Malick set his family melodrama against the creation of the universe with an intentionally elusive, poetic concurrence of imagery, von Trier attempts to merge his outer space story and the melodrama into one, and the two never come together. The characters are too aware of what’s happening in space, and what’s happening makes such little sense that the viewer never believes anything that’s going on. And so, the experience of watching this film becomes a study of von Trier operating as an artist, and unfortunately nothing more.

This is often the effect of von Trier’s recent films, whereas in his earlier work, such as Breaking the Waves and Dancer in the Dark, form and function play out in unison and truly involve the viewer in a powerful experience. This is a shame, as there’s so much to admire in Melancholia, especially from his cast. But the film’s elements never come together in an emotionally satisfying way, regardless of the significant emotions that he’s exploring and attempting to portray within. No one can deny that he’s an astonishing visualist, creating images beautiful enough to frame. But cinema is much more than pretty pictures. Even with the help of Dunst’s best performance yet, von Trier doesn’t summon the kind of grandiose emotional response that his extravagant visual style deserves.