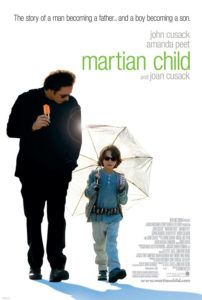 Author David Gerrold is a notable science fiction author, having written a number of novels, even the famous “The Trouble with Tribbles” episode of the original Star Trek television series. He’s also the author of The Martian Child: A Novel About A Single Father Adopting A Son, a book title that serves as a synopsis. In the movie version, whose title was abbreviated to simply Martian Child, a sci-fi author named David (John Cusack) adopts Dennis (Bobby Coleman), a curious young boy who believes he’s from Mars.

Spending his time inside a box and avoiding the sun, Dennis is The Weird Kid, the one other children make fun of. David, now a two-year widower, was much the same as a child, getting picked on and pretending he was from another planet to cope with a rough childhood. He’s been debating with himself about adopting a child, as he and his late wife were considering it before she passed. Unsure if he’s fit for fatherhood, he nevertheless relates to Dennis, who constantly wears sunglasses, coats himself in sunblock, and wears a belt of batteries to keep earth’s light gravity from letting him float away. After spending a little time with Dennis, David wonders: Is Dennis from Mars? Dennis is somehow able to “taste color”—to tell David the color of every M&M put in his mouth. And then there’s “Martian Wishes”, of which Dennis has a limited supply. He uses them to change stoplights and win baseball games. Being immersed in science fiction, David can’t help but question the possibility of Dennis’ claim.

Struggling with his newfound parenthood, David gets help from his best friend Harlee (Amanda Peet) and sister Liz (Cusack’s real-life sister Joan), who are inconsequential to the plot, but offer characters not engrossed in the world of science fiction to clean our palates. We see how poor a job David really does when he almost begins to believe Dennis is from somewhere, not earth, and embraces that belief to a fault. I’m reminded of a movie called K-Pax, which frustrated me to no end. In that movie, Kevin Spacey believes he’s from another planet, and then he eats a banana without peeling first. His doctor, Jeff Bridges, doubts Spacey until he shows clear signs of other-worldliness. This dreadful movie engrosses us in the subject’s alien-like behavior, which is more like a crazy person pretending to be extraterrestrial (as luck would have it, also the conclusion the film makes).

Martian Child doesn’t put us in that position for too long. David comes to understand Dennis’ Mars fantasy as the child’s coping mechanism—as does the board of overseers that’s supervising David’s trial-period adoption. Dennis was abandoned when he was much younger, leaving him feeling not of this earth, unwanted, and even afraid that he or others might just drift away. 10-year-old actor Bobby Coleman is convincing as the soft-spoken Dennis, committing to awkward body language and hoarse speech, offering one of the best performances by a youngster we’ve seen in some time.

Obligatory is the looming fear that Dennis might not come out of his shell and be taken from David. The adoption board delegate played by Richard Schiff witnesses all the wrong moments between the boy and his would-be father, leading to a consultation scene where Dennis is probed about how his own development is going. As the music swells, tears fill our eyes, but unfortunately, it’s a guilty cry where we know exactly how manipulative this scene is—we just can’t help ourselves. The film plays our heartstrings like Zeena Parkins plucks the harp, strumming away as if it were a free jazz concert. We feel operated throughout, and that’s unforgivable. We stand on the outside, looking in at how the movie plays us, and are affected despite it. We hear music telling us how to feel and dialogue filled with David’s cheesy lines like “I do know, there’s no one on this planet that loves Dennis anymore than I do.”

It all would seem rather disposable if it weren’t for John Cusack’s believable performance. Cusack is today’s best everyman actor next to Tom Hanks; he’s exceedingly good at being congenial and could probably never play a serial killer or world terrorist. I remember in the classic Stand by Me how attached I was to his brief older brother character, who was seen only in flashbacks, but seemed so real and lovable. Cusack makes Martian Child believably heartfelt, even sobering at times. That said, there’s nothing the actor can do about the poor taste left in my mouth after departing the theater.