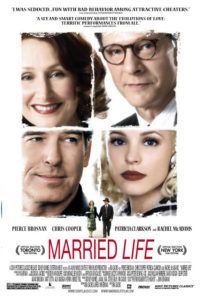 When you love or respect someone so much you walk on tiptoes to avoid hurting them with the truth, perhaps it’s time to reconsider harboring your secrets. Maybe you should confess and make a clean, difficult-but-honest break, leaving you unable to defend yourself from potential guilt. Or, maybe, you should just put the person out of their misery to avoid any unpleasantness altogether. Based on the John Bingham novel Five Roundabouts to Heaven, director and co-writer Ira Sachs adapted the novel along with writer Oren Moverman into Married Life, a calm, quiet, civil story about otherwise deafening emotional conditions. Set sometime during the 1950s, we follow Harry (Chris Cooper), a random businessman in a suit, like every man of that era, who no longer loves but still respects his wife Pat (Patricia Clarkson). Harry does what he’s supposed to, works hard, looks clean cut, and will always be thought of as vulnerable by those close to him.

Harry invites his close friend Richard (Pierce Brosnan) to lunch, where he confesses that Pat views love as purely sex, whereas Harry needs more than that. He wants to be loved for himself, find an emotional equivalent to Pat’s fiery libido. Richard scoffs at such gender role irony. Harry has apparently found an emotional inferno in Kay (Rachel McAdams), a blonde-bombshell wannabe, albeit sweetheart, who arrives presently to the gentleman’s lunch, taking Richard’s breath away. Rather than break Pat’s heart, Harry resolves to kill her. It’s the more considerate thing to do. He doesn’t tell anyone his plans, working out his murder down to every last detail. But he would never suspect that Richard’s affections for Kay would usurp his plot. We’re pulled into a Douglas Sirk-caliber melodrama, complete with ripe and relevant social commentary, with the volume turned down.

The real joy here is watching our quartet of actors waltz with tempered material. Every performance is hushed, as if every scene took place in a library. Perhaps the director intended to mute his allusions according to the era’s relationship decorum. Whereas a contemporary-set version of this story might explode with confrontation, every character in Sachs’ film remains, in a way, self-contained—and the actors here do wonders conveying such taciturn emotionality. Centered on men resolving what to do about the women they love, the film’s women characters reside somewhat in the background, which is, admittedly, problematic. Patricia Clarkson and Rachel McAdams both offer strong roles. Clarkson is an expert at subtlety, allowing Pat to feel comfortable and at ease as the quiet wife; indeed, given Harry’s description of her, we expect something more obviously sexual. But this film is too classy for that. Even The Other Woman, McAdams, isn’t flashed about the screen; instead, she’s just a nice young woman in an unfortunate situation.

Cooper’s performance was surprising, as he’s usually barking orders as some CIA official or military commander. 99.9% of his roles from the last few years are characters somehow directly involved with the government. Be it in Breach or The Kingdom, his brand of straight-arrowness never ceases to snarl its authority. But what about those affecting roles in Great Expectations or Adaptation? Here, he contains utter sensitivity with sinister intentions, conveying a lost expression that we can’t help but want to scrutinize.

I love the way Brosnan’s Richard plays both sides like an American Yojimbo, withholding information and offering enough bad advice to bait both sides into following a particular path, which serves his own desires. Primarily an observing narrator, Richard nevertheless sets everything into motion, but doesn’t intend the consequences as they play out. Constantly moving further and further away from his James Bond-esque persona, Brosnan has given audiences stellar-if-under-seen performances (which is no doubt will be what this role amounts to) in The Matador and Seraphim Falls. His presence here confirms he’s capable of work far surpassing what he’s yet accomplished, and since he’s already earned himself oodles of dough in actionier roles, let’s hope he continues with small passion projects such as this one.

Movies like Married Life are a joy, because they transcend genre classification. Is the film a romantic comedy? At times. Is it a film noir? Yes, I suppose. The picture goes in directions we don’t expect, all curious yet welcomed turns, and we can take pleasure in their peculiarity. As Brosnan’s Richard points out, breaking the fourth wall via narration, how you define the picture depends on your own judgment and how you choose to label the characters.