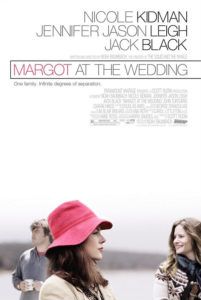 Pondering over the degree to which Noah Baumbach’s movies are autobiographical makes me sad for him. He’s written about families and oddball characters before, and they’re all similar. Baumbach co-wrote The Life Aquatic with Steve Zissou (featuring sea creatures both literally and in metaphor) with Wes Anderson, bringing an estranged family together. And he wrote and directed 2005’s The Squid and the Whale (only about sea creatures in metaphor), wherein he tore apart his dysfunctional family by leaving the eldest son, a clear representation of himself as a teen, at a familial impasse. His new film Margot at the Wedding (sea creatures not included)—since it is, in part, about a writer who uses her family for literary inspiration—incites my curiosity even further. How much does Baumbach rely on his family for his material, and if a great deal… yikes.

We follow Margot (Nicole Kidman) on the train with her 11-year-old son Claude (Zane Paris), off to visit her sister Pauline (Jennifer Jason Leigh), who’s getting married to Malcolm (Jack Black). Margot and Pauline haven’t spoken in years, though the film doesn’t say why right away. It’s enough to know that Margot didn’t want to come: She left her husband Jim (John Tuturro) behind, is hosting a discussion about her literary work while there, and will likely meet her lover, Dick (Ciarán Hinds), there as well—anything she can do to avoid giving Pauline her due consideration. But that doesn’t mean she won’t try to talk Pauline out of getting married, or at least humiliate her in front of Malcolm.

They’re painfully competitive sisters, particularly Margot, whose cutthroat behavior has more than one unfortunate consequence. There’s a point where Pauline brings up how Margot used to climb trees. Everyone urges her to climb the big tree in the yard, the one she climbed as a child. Accepting the dare, Margot reaches unspeakable heights before, like for a cat, the fire department needs to be called. Pauline is bohemian, whereas Margot considers herself an upscale New Yorker, though would never admit to the “upscale” part. Pauline lives in their childhood home with her daughter Ingrid (Flora Cross) from her first marriage, and Malcolm. Margot resents that she wasn’t left the house, and a large part of her hates her sister. Or is it herself that she hates? They have another sister who isn’t there these days before the wedding, but they gossip about her. Sisters talk, as sisters do, I suppose, and deride each other, competing without admitting that there’s a rivalry.

What’s more, both seem to have issues with their father, as though he’s turned them into beings of sexuality; they’ve used sex, each admits, to feel outside of themselves. And when they realize this about each other, their tally of conquests becomes something to boast about. Do you want to count? one suggests. It’s hard for us to know if Margot and Pauline do this to each other intentionally or subconsciously. Every character remains close, so that no matter the age or gender, a sexual link exists between them. Scenes between Margot and Claude remind me of Louis Malle’s Murmur of the Heart, a film involving a mother-son bond. Even the two cousins, Claude and Ingrid, share tender moments befitting of lovers. And while this all may seem innocent, if not burgeoning just under the surface, certainly it furthers the manic way Baumbach’s characters feel for one another.

The son of two film/books critics, it comes of no surprise that Baumbach sees parent characters as openly critical of their children, and children emulating of their parents. But it’s not always constructive criticism the child picks up; sometimes, it’s just plain cruelty. Margot says, “Macolm, do you notice how Pauline sometimes can’t make eye contact? How her gaze hovers just above your head?” Or Margot tells her son that he smells, that his face is round. This is with a non-motherly tone, and since Claude needs her, he believes it. In one scene, Margot tells Claude he’s changed, that he’s cold and rigid now. As Claude walks off damaged, Margot gives an apologetic, “But you’re still hansom…” Being a film critic, I’ve caught myself being too analytical about other things outside of cinema, though I’ve never reached the destructive peak Margot has claimed. I can understand from where, with Baumbach’s critic parents, these characters originate.

Much of this movie felt like an Ingmar Bergman picture, save for the unabashed humor. We find ourselves on a limited piece of property that feels like an entire world. A vast body of water lingers off in the distance, and though this isn’t an island like Fårö, where Bergman often shot, Baumbach limits his space to Pauline’s home, only occasionally taking us away, where something disastrous always occurs. Natural lighting makes every scene candid, thus more affecting during the film’s emotional crescendos. Actors wear little-to-no makeup, making their performances seem naked, and truthful.

Baumbach’s career has been fashioned with frank portrayals, characters so honestly described that it seems we’re penetrating them just by watching. His movie is sincere, ironic, painful, funny, and intelligent. It’s wonderful how uncomfortable and intrusive we feel as an audience during Margot at the Wedding, stepping in on this family who clearly infiltrated each other long ago. They continue to feel around inside, poking for weak spots, but hating every moment of their own damnable, hilarious exploration.