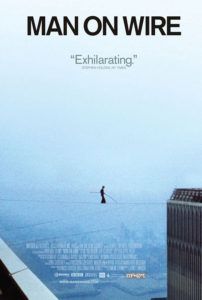 Man on Wire is one of those documentaries you can’t wait to talk about. And if unable to talk about it, you want to read about it and discover any bits of information that were not included in the film. You scour the internet, read articles, tell your friends, and hopefully they see it too and spread the word (as it’s a moviegoer’s duty to support a little film that deserves grand attention). Enthralled by the small scale wonder of it all, you’re immersed in what’s ostensibly a fairy tale come true, complete with a character so light he appears to dance on the clouds.

On August 7th, 1974, French street performer, magician, and wirewalker Philippe Petit did something big, something amazing in the realm of human accomplishment. Attaching a wire to connect both World Trade Center towers, he walked between them, balance pole in hand, and he stayed out there for about forty-five minutes. There he walked back and fourth eight times, and during his procession kneeled on the wire to bow, even laid down for break. Below, onlookers gazed in wonder.

Petit, still alive and animated as ever, tells his story, packing it with symbolism and endearing sentiments, acting out the actions with his hands and lively expressions. He truly is a character, adding dramatic consequence to every event in his life, beginning with a scene as a boy in his dentist’s office where he first saw an image of the planned WTC towers. Petit drew a line between them, envisioning his dream long before the buildings were constructed to realize it. Nevermind what makes him climb, Petit insists. Leave that to the psychoanalysts. What matters is that indeed he does climb, loves to place himself high up, and being self-taught, incredibly outrivals trained performers. No mention is made of where Petit earns his living, but around him are a group of supporters that believe, indelibly so, in his cause.

Building suspense like an expert caper, much of his story resembles a bank heist, involving us in the lengths Petit and company go to get passed WTC security and onto the yet-unfinished top floors. We’re absorbed into a real-life yarn about disguises, fake identification cards, and outwitting security guards. Among Petit’s accomplices are tower personnel, friends, and even a couple of stoners for good measure. The result plays like a cartoon: on the Big Day, Petit and another man must hide under a tarp, completely motionless for three hours as a security guard completes his rounds and then naps on duty.

Director James Marsh (The King, 2005) employs well-integrated dramatic reenactment-type footage, using mostly silhouettes and near-identical actors to portray those involved. Additionally, the documentary assembles vintage footage, new interviews, and photographs to inform the background. We learn how Petit first dared to walk a wire placed between the bell towers of the Notre Dame Cathedral in Paris, and then between towers on Australia’s Syndey Harbour Bridge, both times earning a minor wrist-slap from local authorities in reprisal. Intercut between his progressions as an audacious wirewalker is archival video of construction commencing on the WTC towers, Petit’s ultimate goal.

Such a story told these days is ripe for accusation, in that one could charge the filmmakers with feeding off audience sympathies by using post-9/11 imagery, exploiting the void created by the terrorist attacks to enrich the story with greater magnitude. Certainly seeing the former towers under Petit’s heavenly circumstances plays on our heartstrings, and the footage of their construction bears an eerie resemblance to the site’s post-attack aftermath. But to the film’s benefit, Marsh avoids any mention of 9/11, not even in Petit’s recollections does he lament that their destruction was particularly hard for him, though surely he must feel that way, often calling them “my towers.”

Worrying about death never occurs to Petit; his passion for wirewalking sets that fear aside. As a performer, he’s impassioned enough to make complete strangers into devoted followers. As a personality, he’s such a lively, carefree sort that we can’t help but be involved in his escapade and telling thereof. At the center of Man on Wire, aside from the bold recital of incomparable performance art, Petit is The Great Storyteller reeling us into his foolhardy personal adventure. We go willingly, joyfully, in awe.