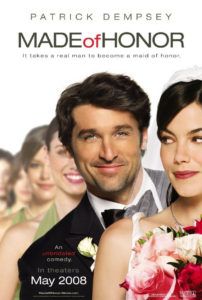 “Chick Flicks” don’t exist. There are only romantic comedies—movies misogynists complain about seeing. Not being a misogynist, I too need a hearty dose of light romance occasionally. I adore “meet-cute” devices wherein two people who despise each other are forced to share the same space, and of course, fall in love. I love-hate those tear-inducing turns right before the guy tells the girl he loves her; she always catches him doing something awful first, which he then must awkwardly explain or make up for in some ridiculous manner. Sure, recent romantic comedies all feel the same. Isn’t that why we love them, because we know their inevitable outcomes?

But then stinkers like Made of Honor play into the genre’s formulas without a single consideration for their audience’s collective memory. It assumes we’ll forget about those titles that made them formula to begin with. The pleasure of formula resides in little detours to make it enjoyable. When movies refuse to reroute their course, we have redundancy, which is not pleasant at all.

Patrick Dempsey, complete with a helmet-head haircut, plays Tom, a notorious womanizer who beds another female every night and prides himself on his emotional detachment. He follows a set of personal rules, which are prattled off throughout, so we too can learn how he maintains his promiscuity (though we’re more interested in why he isn’t crawling with STDs). Tom’s best friend for ten years is Hannah (Michelle Monaghan), a sweet girl who should seemingly have more pride than to befriend such a narcissistic man-whore. But hey, he’s honest about his intentions to his conquests, always telling them there’s no chance of love, just sport-sex… He’s a real class-act.

When Hannah leaves to Scotland for six weeks on a business trip, Tom begins to realize her absence has actually affected him. Could he—gulp—love her? By the time she returns, Tom has given up his casual sex lifestyle; he’s ready for his first commitment. With every intention of gushing his feelings to Hannah, Tom arrives at their meeting only to discover Hannah has fallen in love with and is getting married to the mythical Perfect Guy: Scottish Duke Colin McMurray (Kevin McKidd). What’s worse, she asks Tom to be her maid of honor in the ceremony. With no more than two weeks before their slow-motion shotgun wedding, Tom must separate the engaged, working from the inside like an enemy mole.

So, in fact, Tom is not “made” of honor at all. Indeed, he’s rather conniving and insensitive. Tom’s father, played by Sydney Pollack in an amusing cameo, insists those who love their love so much they let them go are merely “pussies.” He notes Humphrey Bogart in Casablanca as his prime example. Arguments about classic cinema aside, keep in mind the basic plot of this movie: a guy attempts to break up his best friend’s wedding for his own sake. “Made” is more just clever wordplay than a logical title.

The movie loses our interest rather quickly when the setting changes from New York City to Scotland, where everyone’s garbed in kilts and suddenly Tom is chucking logs for sport. Don’t be fooled by the similar plotting; this is not I Know Where I’m Going!, and director Paul Weiland is not an equivalent to Michael Powell and Emeric Pressburger. We never believe Hannah’s affections for Colin; she’s clearly not made for the Scottish Highlands, and the awkward expressions of her mother (Kathleen Quinlan) confirm our suspicions. (Note: Once again, as I did in my review this year’s Prom Night, I must make note of the production company Original Film and ask them to change their name—in consideration that the plot is identical to those of My Best Friend’s Wedding, The Wedding Singer, Wedding Crashers, The Wedding Planner, and most recently 27 Dresses. Derivative Film, perhaps? Either audiences have an obsession with putting the kibosh on weddings or Hollywood needs some new material.)

Made of Honor sucks the delight out of the rom-com. We’ve been seeing this setup for years with recycled plotlines and increasingly unfunny situations. Doesn’t Hollywood realize its producing the same script over and over? It doesn’t matter, I suppose, since such bland redos keep making money. It’s a transparent repackaging of the same junk-food we’ve been fed for years. I’m hungry for something new.