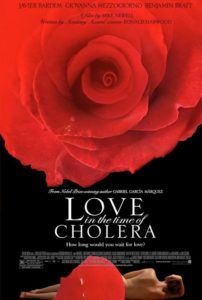 Javier Bardem, after his shocking performance this year as a sadistic killer in the Coen Brothers’ No Country for Old Men, continues with another fine performance in Mike Newell’s take on Gabriel Garcia Marquez’s novel, Love in the Time of Cholera. He plays the longing Florentino Ariza, a man who finds his true love young, loves her for over fifty years, but is prevented from expressing his devotion. To substitute, he has sex, and lots of it. The book’s title refers to the literal historical placement, in Colombia around 1880, and also Florentino’s plague-like love for Fermina Daza (Italian actress Giovanna Mezzogiorno). In their youth, Florentino begins to write Fermina poetic love letters after falling for her at first sight. Her protective father (a miscast John Leguizamo) attempts to keep them apart. She is relocated far away from Florentino, who is a mere clerk in a telegraph office, thus beneath a prestigious noble-girl. And although both waited for the day that they would finally meet again, when eventually their paths cross, she pushes him away, adopting her father’s reasoning in saying their love is “an illusion.”

Upon seeing her, and she him, cholera symptoms arise, only because they’re unable to embrace their love. For anyone who’s sustained butterflies in the stomach in the presence of a would-be romance, lovelorn sickness is a true enough metaphor. Marquez takes it a step further—our lovers begin to vomit, incur stomach pains, have diarrhea, and feel dizzy at the sight of one another. Sexy. Their forbidden love translates into physical ailments mistaken for cholera, perhaps because the plague surrounds their community, causing a psychosomatic effect.

Both attempt to release their love in separate ways. Fermina marries her respectable doctor, Dr. Juvenal Urbino (Benjamin Bratt), has children, and finds herself in a wavering marriage, ignoring Florentino altogether and calling him “a ghost.” Florentino’s outlet turns the movie into a farcical story, one wrought with near-comedic undertones. He claims he’ll hold his virginity for Fermina, vowing to wait as long as it takes until Dr. Urbino dies, but then he is randomly raped by a woman on a riverboat (read that last part again if you need to). He discovers that sex numbs his heartbreak, and resolves that his heart will remain faithful, but his loins shall remain free…

We’re then subject to an ongoing catalogue of Florentino’s sexcapades, each one documented in a kept sex diary. It becomes laughable after 100 conquests, absurd after 300, and concerning after 500. What strikes me is that we never see Florentino dealing with a single STD. And since much of his sex is with random women, many with mates he’s unsure of, he’s rather lucky not to have caught something. Indeed, this is where Marquez’s satire steps in, entering into near pornographic-yet-comic-book ludicrousness on the lengths we go to tame love.

Newell, director of connecting material such as Donnie Brasco and Four Weddings and a Funeral, fails to wrap his audience up in Marquez’s world. Knowing nothing of Columbian history, I felt lost and confused, as neither the setting nor characters were ever fully described for me. Despite its beautiful production, nothing onscreen grabs us, or involves us in the slightest. We never believe Florentino’s infatuation, nor do we understand it. We’re rushed through a story that in novel form would have committed us to its characters, offering us a descriptive understanding—an impression as to why we must labor over Fermina’s bad marriage, and Florentino sleeping with every woman in Columbia.

Marquez’s novel might be a great book (though I’ve not read it), but for film, I can see that his story was poorly adapted. Maybe screenwriter Ronald Harwood missed something from Marquez’s text, or simply couldn’t adapt literary nuances into filmic ones. As a result, characters feel distant and alien. Florentino feels ghostlike, as Fermina describes, but then her motivations are of even greater suspect. The actors do a fine job with what they have, but that isn’t much. We’re lost amid trying to decipher if these events are comedy, satire, melodrama, romance, tragedy, or what. Surely, Marquez’s story combines these genres, which is why the book is a bestseller. None of that writing or inner dialogue is present in the movie, and Newell does little to convey what Marquez’s words could better explain. It’s a prime example of why some books are best left untouched.